Home Sports Football The Bengals Aren’t Quite Dead Yet, But They Are Out of Excuses 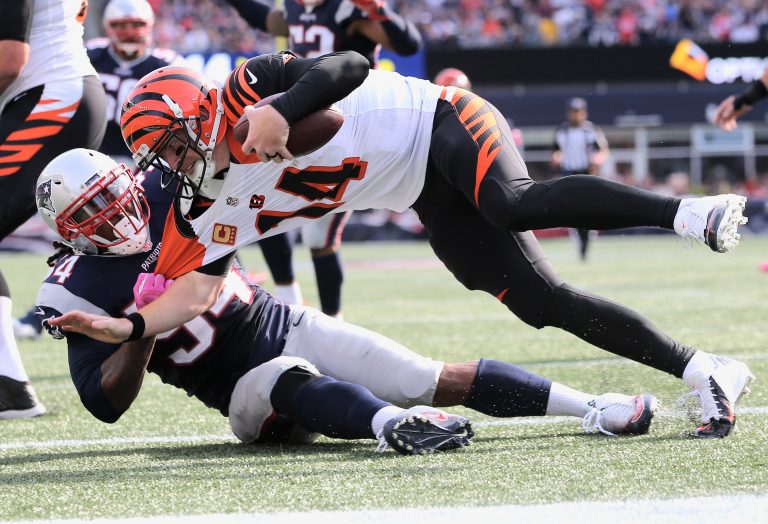 “But inevitably, the further you run from your sins, the more exhausted you are when they catch up to you. And they do. Certain. It will not fail.”  — Clive Owen, ‘Inside Man’

For a half and change, the Bengals were on equal footing with the Patriots, the American Football Conference’s longtime warlord. Andy Dalton was near-perfect and Paulie G was outfoxing the G.O.A.T. himself, Tom Brady. Down just 10-7 at the half despite showing as the better team, a scenario where the Bengals won in New England for the first time since 1986 appeared possible.

But, as Ellis Boyd Redding once said, “Hope is a dangerous thing. Hope can drive a man insane.” So, chalk one up for the Johnny Raincloud Brigade (some might refer to them as realists) who believed water would ultimately regain its level at Gillette Stadium as the second half wore on. It did.

Did anyone honestly expect a Bengals team that has been a bastion of inconsistency through five weeks to come out and play outlier against Brady, a man who has now won 98 (!!!) of his 114 home starts? No, of course not. But after last week’s de-pantsing in Dallas, submitting a solid fight against the baddest dudes on the block wasn’t too much to ask. And that’s what Bengals fans received…for a half and change.

Again, the game began well for the visitors. In a sunny development for Bengals’ faithful, A.J. Green was the recipient of Dalton’s first pass of the day after being neglected (four catches on eight targets) during the meaningful minutes of last week’s game in Dallas. Green finished with four receptions on six targets in the first half. The Bengals were stoned at midfield on their opening march, but it was a Baby Steps Drive.

As the Bengals defense did a marvelous job—excluding the touchdown-yielding charge prior to intermission—containing Brady by simply rushing four linemen and using the remaining seven defenders to blanket the field, the offense fashioned a pair of long scoring drives after their opening stall job.

Dalton completed his first 10 passes and was 13 of his first 14, his lone misfire a misguided fade attempt to Green on 3rd-and-goal from the inch line. (In other news, ban the fade, at least to the short side of the field against one of the NFL’s better cover corners. And while I’m on the subject, if you’re going to pay H-back Ryan Hewitt over $7 million to function as your lead blocker, it sure as hell makes sense to have him play fullback on short-yardage goal line runs instead of Domata Peko, a defensive tackle.)

The Bengals second drive was an 89-yard strut that featured a comeback from 2-and-24 but ended with zero points due a combination of poor play-calling and poor execution on the inch-line. (See the fullback remark). But the defense held, the offense got the ball back, and Dalton eventually speed-optioned his way into the end zone.

Cincinnati’s 7-3 advantage failed to last too long after Dre Kirkpatrick’s back-breaking penalty on third-and-long resuscitated a Patriots drive. This chain of events permitted Brady to continue his two-minute drill, which led to New England surging ahead 10-7 at half. For what it’s worth, at halftime the Bengals had outgained the Patriots and owned a nearly six-minute edge in time of possession.

But, after Cincinnati drove 80 yards in nine plays and regained the lead on a lovely pass-and-catch from Dalton to Brandon suddenly-not-so-garbage-time LaFell, reality struck.

On the Bengals next possession, Dalton was sacked in the end zone for a safety after Cedric Ogbuehi’s hold backtracked the offense inside the 10 (on a play in which Dalton completed a pass to Green to the Bengals 31). On their next four drives, the Patriots racked up 233 yards and 23 points. On their subsequent four possessions, the Bengals gained 90 yards and tallied three points.

All that was left was some jawing from both teams, yet another shady play from Vontaze Burfict, and for the Bengals to reconcile with themselves the regret of A) gifting the Patriots nine points (seven for Kirkpatrick’s penalty before half, two for Ogbuehi’s pre-safety infraction) and B) wondering if any of their litany of ill-timed self-inflicted maladies—a weekly occurrence by now—even mattered, as history indicates Brady likely would have found a way in spite of Cincinnati’s best efforts.

“We continue to be our own Achilles heel, way too often,” Marvin Lewis said postgame. “Whether it be a penalty that sets us back, or more importantly a penalty on defense, whatever it is, [a] third down conversion.”

At 2-4, the Bengals are not yet buried, and may have been given new life within the AFC North. Steelers quarterback Ben Roethlisberger is scheduled to undergo knee surgery Monday morning with an unclear timetable to return. Also, the Ravens have predictably dropped three straight after their 3-0 start. (Also, the Browns.)

But sand in the Margin for Error Hourglass is seeping out, and it is critical that Cincinnati prevail in its next two pre-bye week contests at home vs. Cleveland and in London vs. Washington to maintain any chance at staving off its sins and extending its playoff streak to six straight.