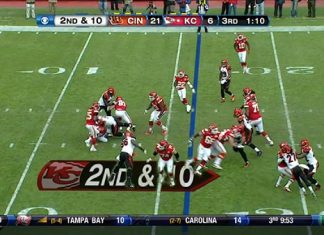 I know it’s been hard for you, Bengals fans. Your spirits were lifted after your team snuck past those darn Steelers and sauntered into the playoffs. Somewhere beneath the completely warranted skepticism and reluctance to become emotionally attached to a self-combusting entity, there was a real belief that your beloved Bengals could rally against a limping Houston squad and win a playoff game for the first time since starting linebacker Vontaze Burfict was three months old. 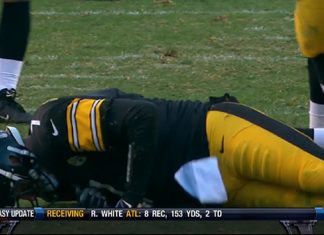 Last week, the Bengals bumbled their way to a 24-17 win in an ugly game that featured second-stringers putting some good tape on their highlight reel. A.J. Green had two targets, the offense managed just nine first downs, and Geno Atkins had only three tackles. It would be an injustice for the final regular season When Geno Attacks to chronicle a relatively meaningless game, so instead I summoned the courage to relive the last meaningful moments of the Steelers’ 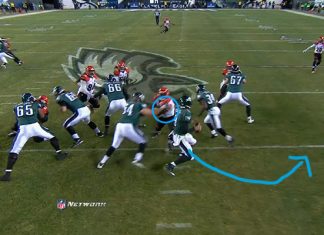 Adam Flango - December 21, 2012
The greatest trick the devil ever pulled was convincing the world he didn’t exist.
-  Verbal Kint, The Usual Suspects

It has become commonplace to peruse the box score after a Bengals game and see the destruction our favorite punishing defensive tackle, Geno Atkins, has imposed. He's put up some eye-popping numbers at times this season (6 tackles, 1 sack, 2 FF at Kansas City) as well as stat lines that did no justice to his dominance (3 tackles, 1 sack vs Oakland). Last Thursday, in perhaps the least impressive 21-point victory in recent memory, Atkins put up the dreaded bagel: zero tackles, zero sacks, zero forced fumbles—straight goose eggs across the board. It was the first game that Atkins did not register a statistic since Week 14 in 2010, his rookie season.

So maybe you thought there would be a chance that this space would be empty this week, that with no statistics, there would be nothing to say. Well you would be wrong. That’s what Geno WANTS you to think. With a season-on-the-line game coming up against the Steelers, why show them more than he needs to?

And have we not learned anything from the myth of Geno Söze? Just because Atkins does not exist in the box score does not mean that teams did not (or should not) fear his presence.

In reality, though, it was not Geno’s best game, largely because it did not need to be. He didn't play as many snaps as usual (only 43/56). And when he was on the field, he was asked to control the middle and contain Bryce Brown more than he was asked to rush the passer. But when he did get that chance, he made an impact despite what the box score suggests.

Don’t believe me? Well, I give you this week in "When Geno Attacks."

Following a silly Carlos Dunlap penalty (proving the popular notion that Dunlap may not have the sharpest football mind), the Eagles had a first and 10 near midfield. At this point, the Bengals were down by three and looking vulnerable against a depleted Eagles squad. That’s when our hero decides that it’s time to make a play.
Read more 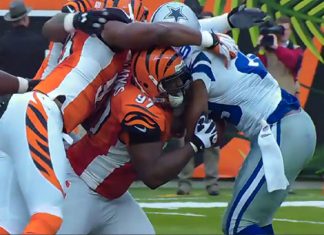 Adam Flango - December 12, 2012
Between grooving to cherubic Christmas carolers such as Dean Martin, Josh Groban, and the penultimate seasonal siren Ms. Amy Grant, as well as catching up on the story behind this Abu Nazir fellow that seems to have everyone in the CIA mighty worried, I caught my first live Bengals game of the season. I've been writing about the team for over a month now, but living in the Miami television market does not afford me the luxury of watching the Bengals play on a regular basis. Instead, I've been watching the tape, which is a good way to objectively analyze the game without being swayed (or, more likely, distracted) by annoying announcers or fan cutaways.
Read more

Adam Flango - December 7, 2012
Reggie Nelson rarely jumps out at you when watching him on tape. Often times, he is lined up more than 20 yards away from the line of scrimmage and only appears when a wide receiver beats a corner and needs help deep. He is content—or perhaps more accurately, the coaching staff is content—to prowl in space and keep plays in front of him rather than assume the more celebrated role of freelancing, ball-hawking safety, a la Troy Polamalu. Nelson may not be as dynamic and celebrated as other athletes at his position, but his role is crucial in maintaining order in the ever-improving Bengals defense.
Read more 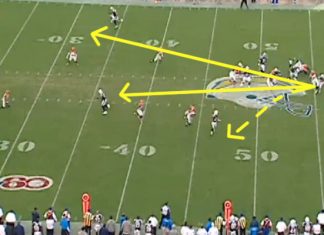 Last Sunday’s trip to San Diego yielded a modest statistical line for the one-man wrecking crew who is quickly become something of a cult hero among students of game tape and statistical nerds alike: Mr. Geno Atkins. His line against the Chargers—3 total tackles, 1 solo, half a sack, and one quarterback hit for good measure—was not quite the gaudy production that has become routine for Geno. An uneducated fan would be curious and tempted to question why Atkins w 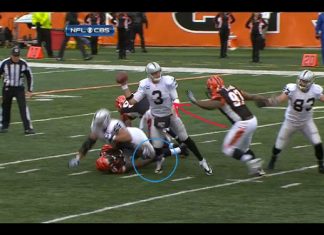 Adam Flango - November 29, 2012
Last week, we took a look at Geno the Powerful, the defensive tackle who has been known to flick offensive linemen out of his way as if they are pesky insects. He demolished Poor Jeff Allen, an overmatched rookie on the worst team in the league. It was hardly a test for the best defensive tackle in the NFL.
Read more

Adam Flango - November 23, 2012
Marvin Lewis’ nine-year run in Cincinnati has been marked by many things—an inability to win a playoff game, a lack of consecutive winning seasons, and scores of goofy smiles, just to name a few. But from an outsider’s perspective (Ed's note: and insider's), it has always been his timid play calling/decision making that has been especially maddening.
Read more 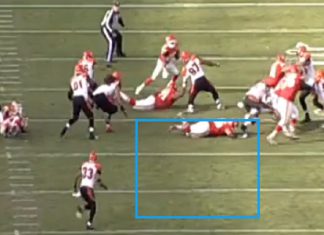 Adam Flango - November 21, 2012
As Chiefs rookie left guard Jeff Allen awoke last Sunday morning, he probably ate a couple bowls of cereal, maybe a Denver omelet or two, looked over the crayon drawings in Romeo Crennel’s playbook, and cleared his head before taking the field. On most days, that would be enough preparation for a day’s worth of pushing and shoving 300-pound men.
Read more
1...192021Page 20 of 21