Home Culture Arts On View: Based on a True Story at the Contemporary Arts Center 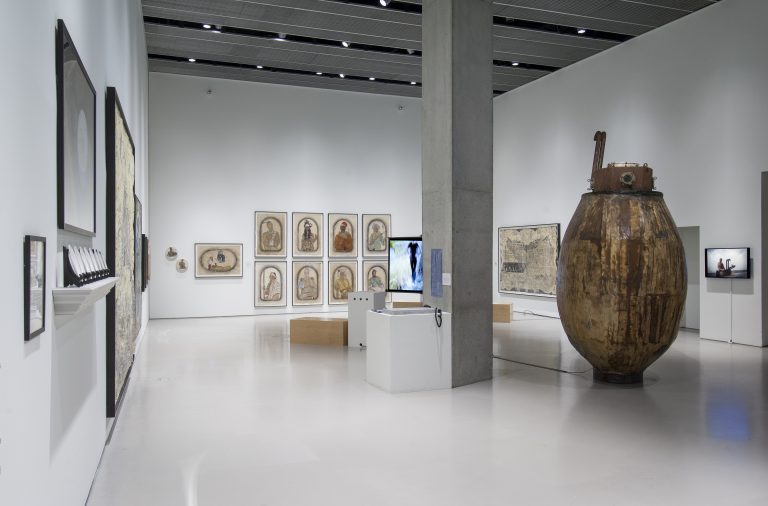 There’s an Italian saying that goes se non è vero, è ben trovato. Meaning, roughly: if it’s not true, it’s a good story. This same appreciation for story truth currently fills the second floor of the CAC. Based on a True Story, a pair of dialoguing exhibitions from Duke Riley and Frohawk Two Feathers, riffs on the real in a poetic—if disconcertingly so—way. Both artists reinvent history from the perspective of an outsider, but keep things sufficiently grounded so that you’re left questioning your own assumptions and understanding.

And while they’re asking pretty serious and probing questions with their work, it’s done with plenty of wry wit. Case in point: Riley’s acorn submarine (above), which immediately confronts you as you enter the gallery space—part of a project called After the Battle of Brooklyn. First, the real story: It’s 1776, Revolutionary War–era America, the Brits and the Americans engage in a naval battle in New York Harbor, using rudimentary turtle submarines to toss explosives onto enemy ships. Fast forward two-plus centuries to Riley’s restaging, in which he creates his own turtle submarine and floats out in the harbor to see how close he could get to the Queen Mary II Carnival cruise ship. (He’s captured by Homeland Security some 30 feet in.)

“A lot of his stories become metaphors for current states of affairs,” says CAC Curator Steven Matijcio. “That fight was about American liberty—and [now he’s asking] What is our status of liberty these days with the Patriot Act and all of these various machinations that have come out of the war on terror? It was about that American ingenuity and patriotism being quickly stamped down by the presiding authorities. He’s looking at populist myths or obscured historical facts—adventurers, outsiders, all the people who have been written out of history, or that never made it into the official records. He wants to rediscover those people and he often does it through a very performative action, a lot of what I call ‘radical craftsmanship.’ He’s speaking in the language of a museum to reinsert these people and these stories into how we typically read history. So it has to be told through artifacts, through records, through a particular visual language.”

But it’s not just about a stunt: Riley uses the performance as platform to create an entire mythology. In this case, the submarine is accompanied by a video documentation, a hero-esque photo of Riley in the submarine with a slightly foggy Statue of Liberty in the background, plus detailed maps (“You can see he becomes incredibly intricate. [He has a tattoo background, and] all of that line work and the detail we typically associate with a tattoo becomes translated onto this monumental kind of tapestry scale. There’s a lot of debauchery going on here—it’s kind of like Hieronymus Bosch meets maritime history,” says Matijcio), whales’ teeth (made of plaster), and other enigmatic pseudo-artifacts created around his re-imagined event.  “But we wanted to show the actual artifact,” says Matijcio, “and you can peer in through this tiny little port hole and he’s got a bunch of crushed beer cans in there—it’s giving you a glimpse into this collision of histories.” 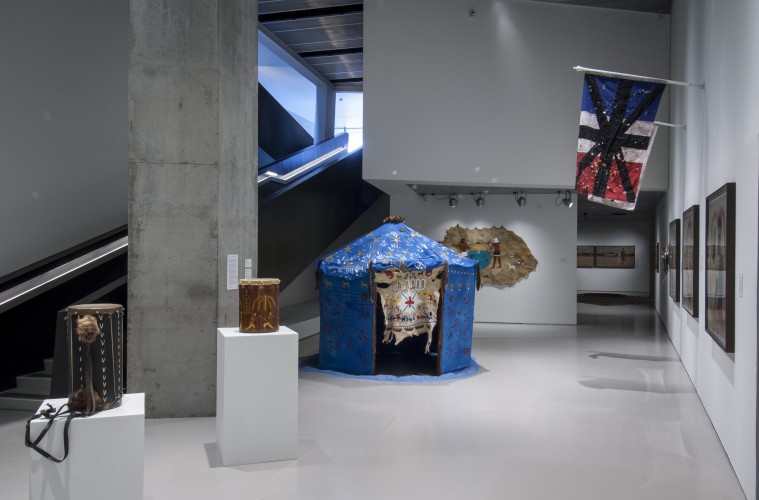 The rest of the exhibition follows suit. Frohawk Two Feathers, whose pseudonym comes from his Native American and African American background, has fused that heritage and created an entire universe that re-imagines 18th-century colonial history. “He saw his heritage, which is often mired in slavery or this subservient reading, as one that could now be royalty re-imagined in a more positive, empowered light—with the premise that France and England were not competing imperial powers, but that they were combined as Frangland, and that they are competing against New Holland, this kind of Scandinavian hybrid,” says Matijcio. “He’s not creating this totally artificial myth; they are based upon actual events, but a lot of his characters are exaggerations or amplifications or alternates. He’s referencing actual histories and translating them into this larger fable. It’s very involved. They all live inside his mind and they’re continually being reformulated and respoken. What’s so interesting about his work is that he’s not only looking at 18th-century colonial portraiture, folk art, but he’s fusing that with hip hop, with street art, with Basquiat, with more contemporary-modern practices to create these hybrid characters. You look at their faces and they have what he calls an imperial tattoo system, that’s kind of based on prison culture.” 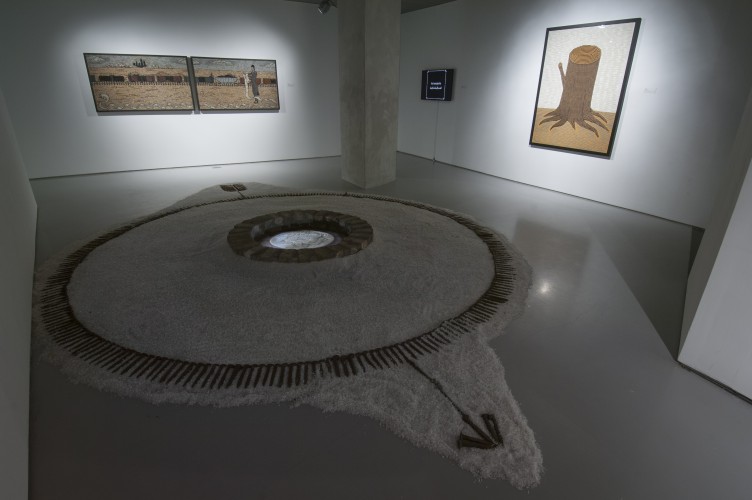 Rounding out the show is Riley’s An Invitation to Lubberland. “There’s a prehistoric river under Cleveland, Ohio, called the Kingsbury Run, [which during the Great Depression] became this massive shantytown,” says Matijcio. At the same time there was this mass murderer that got loose—no one knows if it was staged or if it just happened. But a lot of [the homeless] were driven out, it was set aflame, it was kind of this moment that many people were all too happy to forget about. Duke wanted to rediscover Lubberland, so he goes and rides the rails all around the U.S. for a year and tries to take this hobo census once again, and it culminates with him breaking into the Cleveland sewer system, getting into the Kingsbury Run, and searching for the headwater.”

What’s on display includes a mosaic made of cigarettes, a map he made of the Kingsbury Run (“as he’s riding the rails and pursuing his destination, mixed in with a lot of allegories along the way,” says Matijcio), and a large compass made of rock salt and railway spikes, with a buffalo nickel and a mixture of whiskey and water in the center (“It evaporates, and we keep having to buy more and more Kentucky Gentleman to keep feeding the thing”), and the suit Riley wore through the gutters and sewers.

The work from both artists is meant to confuse you, but it does so in an honest—not pretentious—way. And as most of it is created in styles not readily associated with contemporary work (the mosaics, to start), expect moments of dissonance, and embrace them.