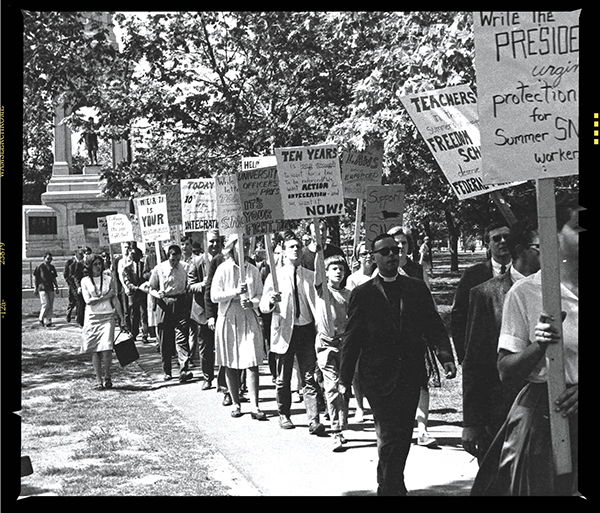 Across the street from the office of Jacqueline Johnson, archivist for Oxford’s historic Western College for Women, is a small amphitheater where she can break for meditation and reflection. A curved bench faces semi-circular rows of rugged Indiana limestone and provides a view of foliage beyond. It’s a little sanctuary within the Western campus, which itself is part of ever-growing Miami University. But this haven isn’t a retreat from reality. Instead, it’s the understated and somewhat-underappreciated Freedom Summer Memorial, which pays tribute to a time, 50 years ago this month, when Western played a crucial role in events that forever changed the nation.

In June 1964, approximately 800 Northern college students and experienced Southern civil rights workers gathered on the Western campus for two week-long training sessions. Berea College in Kentucky, the original host site, had cancelled, so Western, then an independent school, stepped up. They had come at the beckoning of Southern activist groups—especially the Student Non-violent Coordinating Committee—and the National Council of Churches. The Southerners were young, African-American and determined; the Northerners idealistic and outraged about racist violence in the South. Both were hopeful they could hurry along change by their efforts. The mission was to travel to segregated Mississippi to register black voters and teach at “freedom schools.”

The inscriptions on the memorial recall just how dangerous Freedom Summer was—Molotov cocktail explodes in basement of Sweet Rest Church of Christ Holiness; Civil rights car hit by bullet; Students told to watch out for Klan. Some are actual newspaper headlines from the era. The most chilling refer to three young men who came to the first week’s training session, left for Mississippi before it was finished, and soon went missing. Their disappearance haunted the second session. That August the bodies of James Chaney, Andrew Goodman, and Michael Schwerner were found near Philadelphia, Mississippi. Their deaths helped galvanize the nation to force the South to end institutionalized racism.

Miami plans a special 50th year recognition of the three, says former university architect emeritus Robert Keller—something that will complement the existing memorial. “It helped plant Western’s role in civil rights history,” says Johnson, standing near the amphitheater and as proud of her employer as if she had actually founded the school. Last year, she edited the book Finding Freedom:  Memorializing the Voices of Freedom Summer (Miami University Press), about the 14-year-old memorial. Western, which started as a female seminary in 1855, merged with Miami in 1974.

“This is the actual place where they trained,” Johnson says, looking toward Western College Drive and the campus’s heart. She then nods toward 66-year-old Clawson Hall, and speaks as if conjuring ghosts. “That’s the actual hall where they lived and ate, where they did physical exercises, where trainers were teaching them how to protect limbs if beaten, if attacked by dogs, if sprayed with water hoses.”

By Johnson’s research, only one Western student attended the Freedom Summer training sessions. Judi Hampton, an African-American student who had attended Western in the early 1960s did civil rights work in Mississippi in 1964. She now is president of Boston-based Blackside, Inc., which produced the documentary series on the civil rights movement, Eyes on the Prize, which aired on PBS. (In one episode, Schwerner and Goodman can be glimpsed at Western.)

“When I was at Western the community had its racial sensitivities, so I was really surprised when I heard the college was hosting,” she explains. “As a student, I was well aware the community had not had that much interaction with African-Americans.” Still, she has visited and guest-taught there since. “I’m very proud of Western,” she says.

Miami has hosted two Freedom Summer Reunion Conferences with a third slated for October 12–14. Those reunions can be wrenching—and the memorial plays a role in making it so. “When they make their first visit back, a lot of their emotions come back about what the experience in Mississippi was like and what their experience on the Western campus was like in 1964,” Johnson says. “This is a place where they can sit down and think about it.”

Originally published in the June 2014 Issue