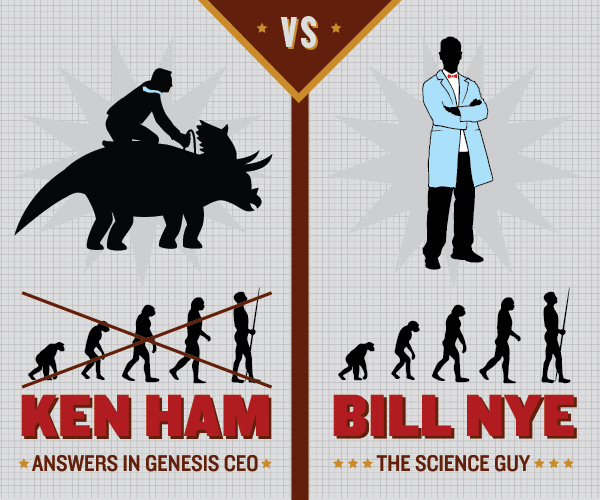 It’s the most unlikely debate since G. Gordon Liddy and Timothy Leary: Bill Nye, “The Science Guy,” vs. the Creation Museum’s Ken Ham, at the Petersburg, Kentucky, museum February 4. The question: “Is creation a viable model of origins in today’s modern scientific era?”

Another question: Should scientists even engage with creationists over something that is not actually debatable? Chicago blogger James Kirk Wall notes, “If one third of the adults in this country believed that babies came from storks, as insane as it sounds, yes, we need to have the debate.” Really, for both sides, it’s not debatable. As one commenter on Ham’s Facebook page wrote, “While so many are saying, ‘I hope Ken wins the debate’ I am praying, ‘I hope God wins Bill.’ “

The $25 tickets for the show—because after all, this is a debate between a television personality and a man trying to build a dinosaur-riding theme park—sold out in minutes. Check the museum’s website for webcast details.