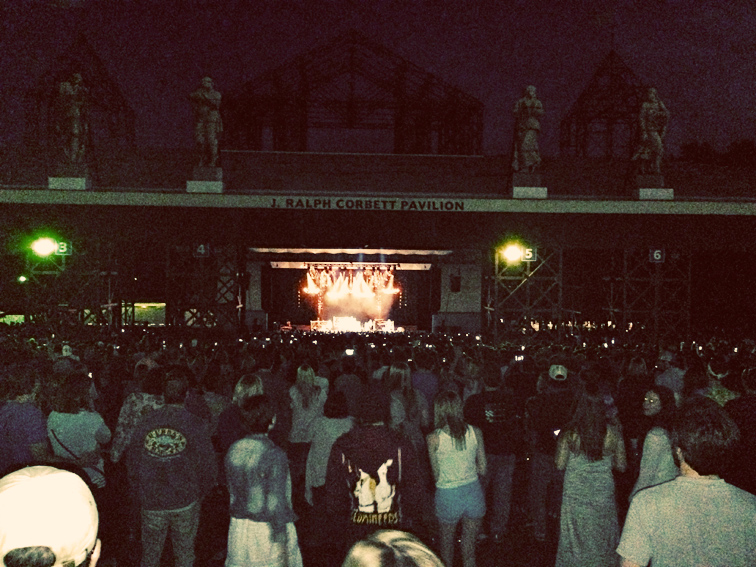 The Lumineers took the main stage at Riverbend last night, preceded by openers J Roddy Walston and the Business, and the Cold War Kids.

But most importantly, I must address my first encounter with Riverbend’s new AstroTurf lawn section, making its debut this season. For anyone that’s suffered through a muddy, itchy, what-the-hell-is-crawling-on-my-leg concert in the cheap lawn seats, the new faux grass is like trading a middle-of-the-row, Coach Class airplane seat for an aisle Coach seat not beside that smelly insurance salesman. So seriously, it’s a huge improvement.

J Roddy Walston and the Business—awesome band name, by the way—played a handful of songs before making way for the Cold War Kids, who mixed in a few older tracks alongside selections from the 2011 album Mine is Yours (which I really enjoyed) and their April release of Dear Miss Lonelyhearts (meh).

The evening’s headliners got rolling just after nightfall with a voice and sound that translates beautifully for live performances. The Lumineers were originally scheduled to play PNC Pavilion back in May, but strong ticket demands bumped them to a summer show on the big stage, resulting in a strong overall turnout. The folksy, Americana quintet worked its way through the entirety of their eponymous first album (if my memory serves me well), including the mega-hit single, “Ho Hey.” The group’s combination of indie and mainstream appeal created an eclectic cross-section of concert goers, ranging from fedora-donning hipsters to middle-aged empty-nesters, not to mention the pair of high school kids stumbling around looking for weed. (Sorry we couldn’t help you out, fellas.)

The band unveiled a few new tracks and covers as well, dusting off a lively rendition of the Violent Femmes’ “American Music” and a rollicking yet fervent version of Bob Dylan’s “Subterranean Homesick Blues” (to the delight of this particular blog post author). They even ventured out to the small rising between the pavilion seating and lawn area to perform a pair of songs, something I’d never before witnessed a band do at Riverbend.

Performances of “Stubborn Love” at the end of their initial set and “Big Parade” to close out the encore were highlights of the night. So too was the interpretative dancing displayed by the couple just in front of us throughout the evening. Although it’s probably a good idea they opted not to try the Dirty Dancing move. That dude was no Gosling.