Syd Nathan is back. The founder of Cincinnati’s King Records, known for his comical Coke-bottle glasses and stocky build as well as for his authoritarian manner, died of heart disease in 1968. But he’s a character in Get On Up, the new biopic about his greatest discovery, James Brown. The Actor Fred Melamed (A Serious Man, In a World) talked about playing Nathan.

So what’s your Syd like? I wanted to be true to what I could find out about him, which was he was a tough guy to do business with, and dictatorial, and famous for screaming at people, but at the same time he had a great deal of energy and enthusiasm.

Did you practice screaming? There’s not too much of me screaming. I wasn’t striving to scream the way he screamed.

How did you get the Syd look? I do wear glasses, but the glasses they made for me were so thick that I couldn’t see through them. So they made a teeny tiny spot in middle so I can actually see a little bit, but people won’t detect it when looking.

Do you think Nathan liked the music that King released? I don’t think he could have succeeded at the level he did without having a real taste for and sense of it. But I also think he was in it to make money and there was no two ways about that. I don’t think that led to his necessarily treating his artists benevolently.

The trailer has Syd awkwardly dancing the Mashed Potato for an incredulous James Brown (played by Chadwick Boseman). Was it hard to learn? I went to Yale Drama School and was forced to take three years worth of dance training, though you’d never know it to look at me now. But I dig music and I like to move. I went on YouTube and there are people giving Mashed Potato lessons. I don’t think I’m going to have a second career as a dancer, but you never know.

Any conclusions about Syd’s relationship with James Brown? Syd was self-made. People who fulfill that kind of destiny don’t take well to other people saying, “I want to have a voice that’s equal to yours.” People in that position don’t easily diminish their own importance. James was like Syd—somebody who made himself. People who do that, it’s tough to get them into a collaborative or collegial mentality.

Illustration by Pablo
Originally published in the August 2014 issue 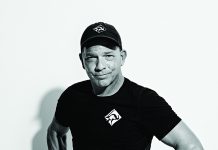 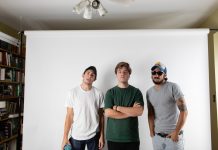