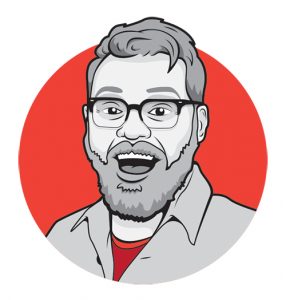 Ask Cincinnatian Travis McElroy to describe what he does for a living and he’ll tell you, “too many podcasts.” To mention a couple, McElroy records with his two brothers the advice podcast My Brother, My Brother, and Me and a series of live-recorded, role-playing games The Adventure Zone—think Dungeons & Dragons meets Theater of the Mind. The former was made into a streaming TV show; the latter a New York Times bestselling graphic novel.

Podcasting isn’t you’re typical family business. What made you and your brothers take the leap? After Griffin [the youngest brother] graduated from college, he and I decided to move to Cincinnati. Our other brother Justin [the oldest] was afraid we’d all lose touch, and eventually Griffin had plans to move to Chicago. The podcast really just started as an excuse for us to stay in touch—or at least talk once a week.

When you started recording in 2010 did you ever think this would be your full-time career? I didn’t even know that it could be. The irony is that our dad was a radio D.J. all of our lives—and his dad, and his dad. I remember growing up thinking, Well, radio is dying so I’m not going to do that. Then I started doing podcasting and came to find out that it’s more like the radio that existed when my dad started his career than I ever could have imagined.

What advice would you give to someone looking to start a podcast? On My Brother, My Brother, And Me we always tell people not to follow our advice, but on this I feel pretty confident. I think the key is to just start recording, as soon as you have an idea. You’re not putting it out live. Even if you record the first episode and it’s absolute garbage, you can just delete it and try again. A lot of people hesitate on any kind of creative endeavor because they’re afraid that it won’t be good, and the answer is it probably won’t be. You’ll make some mistakes, there will be things you don’t like, but you can edit it and you can try again. We’ve done over 400 episodes and we’re still learning.

You can technically podcast anywhere. What brought you back to Cincinnati? My wife and I lived in Los Angeles for two years, and we moved back for a lot of reasons. We have friends and family here, we love Cincinnati and everything that is happening here, and my wife was pregnant. We were going to have a baby, and we wanted to raise her here. When we thought about the idea of home and where we wanted our kid to grow up, we wanted it to be here.

Since leaving the Cincinnati Shakespeare Company in 2015, do you still feel connected to the arts scene here? Cincy Shakes brought me to Cincinnati. I moved here and spent about nine months trying to convince them to hire me for something, and worked for them for almost six years. Now I go down to see shows whenever I can. I’m so proud to see what they’re doing with the new space. It’s a great time to be into the arts in Cincinnati.

And in your professional life? I have started hosting a Cincinnati Underground Society show every couple of months, and I try to include local people and bring people in from out of town. It’s the kind of thing that has always frustrated me, that so few people see Cincinnati as a destination for arts or comedy—both as consumers and the people creating it. I try to encourage people to do stuff here and work with people here as much as I can.

When you record, do you forget that people are actually listening? I work from home; I sit in my office with a microphone all day. Coming from theater, you get used to working with an audience that is right there. When you make a joke you can hear them laugh. So sometimes it can really feel like now I’m performing in a vacuum. Getting to do live shows is a nice reminder that there are people listening, and they care about you and you care about them.