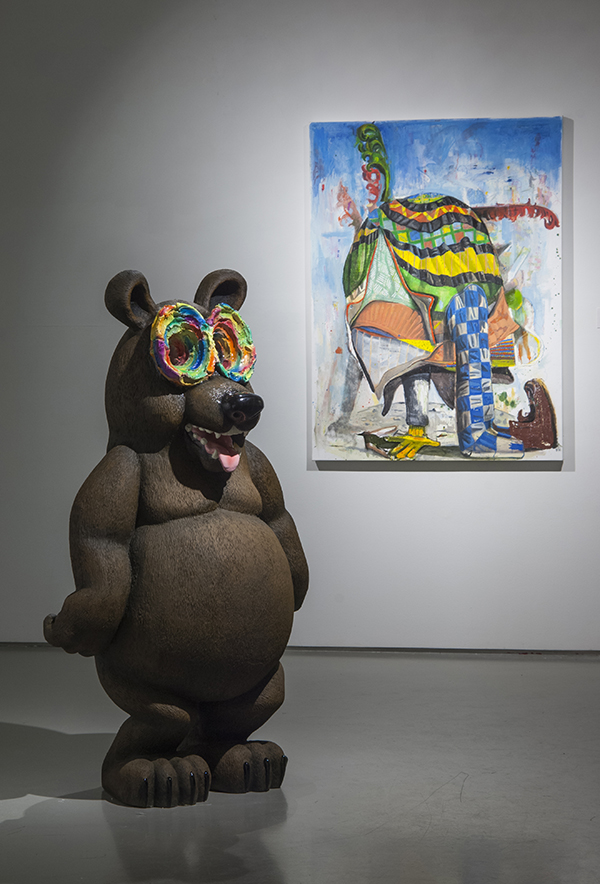 The challenge: How do you display paintings in a building that was designed in intentional opposition to the art form? Zaha Hadid, the architect of the Contemporary Arts Center, “thought that painting was a dead man walking.… She spoke about creating this space that would not house painting, that would be for three-dimensional installation and media work,” says CAC Curator Steven Matijcio.

The solution: Well, push back. And do so with a good touch of tongue-in-cheek mischief—as artist Michael Stillion, who lives and works in Cincinnati, did in curating this show, beginning with his definitions of painting, parody, and disguise. “He boils painting down to its ignoble essence, which is basically pushing around colored pigment on a surface with a brush; there’s no grandeur,” says Matijcio. And his definition of disguise starts out “To conceal a piece of art behind a large concrete pillar. The huge pillars totally disguise the art on the walls”—a reference to both the architecture and some unconventional curatorial choices he made in placing the works.

The exhibition places, without hierarchy, very young artists alongside internationally renowned artists—all of whom have some connection to Cincinnati. “Michael’s work is all about this delirious disguise,” says Matijcio. “Oftentimes when you’re camouflaging yourself you’re trying to escape from vision, whereas he’s trying to create this costuming that calls an immense amount of attention to it. That becomes the foundation for how he selected all the artists.”

A thread of color and form structures the show and leads you through it, starting with Stillion’s Push and Tony Tasset’s Bear, which becomes something of an ad hoc mascot: “It has tunnels of color in place of eyes, and we travel along that. It becomes this kaleidoscopic, hallucinatory non-vision that begins to guide us through the show,” says Matijcio. Sarah Blyth-Stephens’s Wall-ish I and Wall-ish II presents painting in a more physical, architectural way. She created the work by hanging plastic sheeting on-site, painting it with plaster, and removing the curtain—leaving behind a delicate, sculptural painting that also confronts Hadid’s columns (“She obscures, disguises, and embraces them,” he says).

Mark Fox’s A Fool’s House Fulfilled covers the back wall of the space, as well as all three themes of the show. Fox used a push broom as paintbrush, spinning dust and debris collected from the gallery to set the piece’s perimeter. “All the wreckage of the previous show becomes the paint for this work,” says Matijcio. “The splattered dirt becomes the compass rose, and while it’s present, it’s also obscured because you see all this paper starting to grow over it, almost like a moss over a stone. You’re not sure if all that paper and all that work is disappearing into the wall or emerging out of it. It’s this very ambiguous moment that becomes the culmination of the show.”

The takeaway? “Painting has never been more widely practiced. It’s still vital, it’s still relevant, and we wanted this idea of it escaping the death shroud,” says Matijcio. “The title is a quote from GK Chesterton. His secret of the world is that we actually see everything from behind, in distortion.… Yet rather than bemoan this state of affairs, we celebrate it—the idea of distortion actually being more colorful and more freeing, more true to the human quality.” 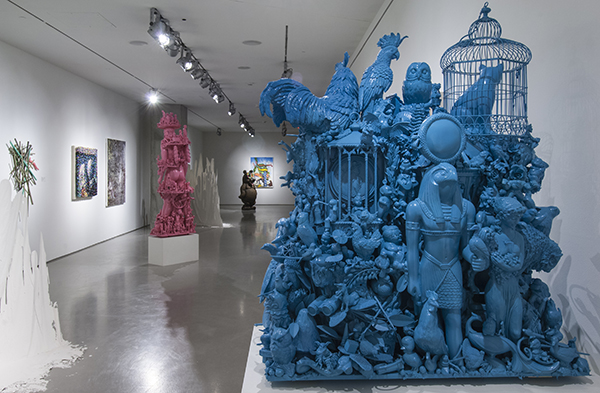