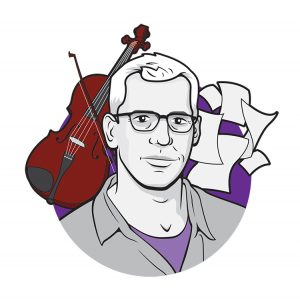 Christian Colberg joined the Cincinnati Symphony Orchestra in 2010 as Principal Violist, and is the first member in at least a couple of decades, perhaps ever, to play a concerto that he composed—the second of three pieces in “The Heart of Don Quixote.” He talks winging auditions, what distinguishes his musical telling of Quixote, and Van Halen.

How did you get started in music? My grandparents were real music lovers. I spent a lot of time with them, and they always had classical music on. There was this one record by Ravi Shankar and Yehudi Menuhin called West Meets East. I kept listening to it and listening to it, and I said I want to play that. They assumed that meant the violin; I’m pretty sure I meant the sitar. But it turned out OK.

You studied violin, and didn’t even own a viola when you won a spot to play it professionally. I graduated Peabody and found myself in a position of How am I going to pay my rent? I saw an ad for a viola position in the Baltimore Symphony, so I borrowed a viola from the school. [Laughs] I think because this was my first audition ever, I didn’t realize how hard these things are. And it was on an instrument I didn’t play. It was so surreal that I’m not sure I had time to get nervous.

What gave you the itch to compose? Violinists, pianists, cellists—they have quite an abundance of incredible concertos. Violists, we have a few.

Your concerto is based on Don Quixote. I took the piece that is going to be played after, Richard Strauss’s “Don Quixote,” as my launching pad. And being from Puerto Rico, this book is required reading. [Strauss is] actually telling a story from the book—you hear the story in music form. I was doing it more from the psychology of who the person was, trying to represent that through music.

And when you’re not on stage? I love to play drums and electric guitar. A lot of my inspiration for how I play and how I approach music not only came from composers like Beethoven and Tchaikovsky, but also very much people like Van Halen. And when it comes to how to spin melody, people like Julio Iglesias. And the Beatles, of course the Beatles.