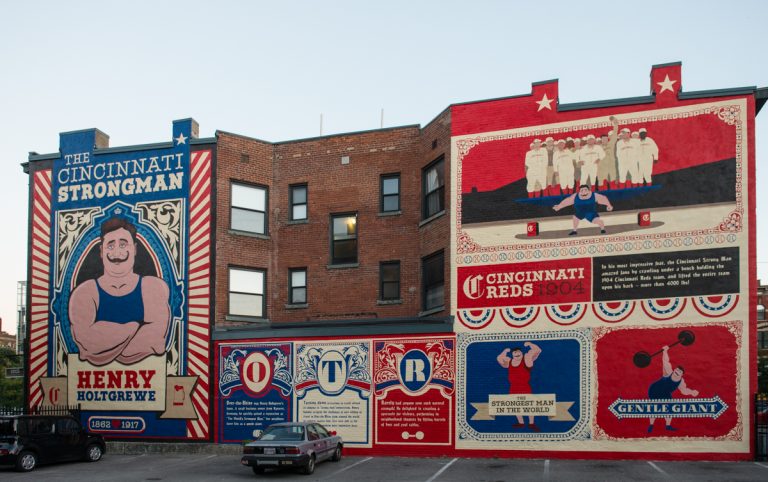 If you’ve walked south on Vine Street through Over-the-Rhine lately, you’ve probably seen the new ArtWorks mural, “Cincinnati Strong Man.” If not, unglue your eyes from your phone and take in the scene on the north-facing side of the building occupied by 1215 Wine Bar & Coffee Lab and Bakersfield OTR. The mural features more than 2,000 square feet of vaudevillian-style graphics that detail the feats of Henry Holtgrewe, a brawny, mustached German immigrant who settled in the West End in 1884, worked in saloons, and muscled his way to international fame.

The mural, designed by Jason Snell, founder of the OTR-based creative agency We Have Become Vikings, recalls Holtgrewe’s story, including the time in 1904 he lifted a bench that held the entire Reds team, hoisting on his back roughly 4,000 pounds. ArtWorks estimates more than 200 people attended the mural dedication on October 11, nearly half of which were Holtgrewe’s kin donning T-shirts reading “I’m related to Henry.” Greg Hardman of Christian Moerlein brought the booze, a limited edition porter brewed in honor of Cincinnati’s strongman.

Moerlein’s Holtgrewe brew was inspired by not only the strongman’s strength, but also the softer, sweeter side the family speaks of. Hardman wanted something strong yet gentle, with broad appeal. A porter fit the bill. Don’t be deceived by its chestnut coloring; this dark beer isn’t heavy. It’s mild and smooth, with the taste of toast (typical of the style, an ale made with dark malts). You can find it on tap at Moerlein’s Malt House Taproom now. Go forth and drink like a strongman.