Paul Dixon, Ruth Lyons, Bob Braun—it has been decades since those Cincinnati TV icons signed off. Like dial phones and afternoon newspapers, they are artifacts of a long-gone era, unknown to at least a couple generations of Cincinnatians. But one man never forgot them. Indeed, he has cited them as his inspiration and continued bringing their legacy to a national audience well into the 21st century.

David Letterman was the last of his breed, the final member of his generation with a show on late-night television. The 68-year-old Indiana native cut his TV-viewing teeth on Paul-Ruth-Bob’s shows, which were carried on the Indianapolis NBC affiliate. And what he saw shaped the weird, wonderful Late Show world.

Now we all face the grim reality of no more Late Show with David Letterman. No more Top 10s. No more Stupid Pet Tricks. No more Rupert Jee’s Hello Deli, or Biff Henderson, or Jack Hanna, or Paul Shaffer. No more Christmases with Darlene Love. Those are losses felt by Letterman fans everywhere. But in Greater Cincinnati, where, for decades, Paul, Ruth, and Bob ruled the midday TV airwaves, Letterman’s leaving means something else: It’s the end, once and for all, of that Golden Age of Cincinnati Television.

I started writing about music at The Cincinnati Post in 1982, a few months after the premiere of Letterman’s groundbreaking Late Night show on NBC. It led to the birth of an unwritten rule in tri-state print journalism: Every time Letterman was mentioned in either Cincinnati daily, the TV writer always cited Paul-Ruth-Bob, our Holy Trinity of daytime TV hosts, and their influence on Dave. By the time I went to The Enquirer in 1995, the practice was so ingrained that it was something of a joke among reporters.

I got here too late for the reigns of Ruth Lyons and Paul Dixon, but in 1978, when I moved from Columbus to play upright bass and guitar with the Katie Laur Band, I got to see The Bob Braun Show up close and personal on more than a few occasions. When the band had a show to promote, we’d all wake up early, dress up nice, and head to WLWT to do a couple songs in between Braun’s butter-smooth local commercials. The show was an anachronism even then, but the Braun band, made up of top local musicians, was still very impressive. Yes, there was a Lawrence Welk vibe, but it was live TV, and it was happening right there in downtown Cincinnati.

Fast forward to May 20, 2015: I was in the Ed Sullivan Theater for the final night of Letterman’s Late Show. Not surprisingly, I got thinking about Paul-Ruth-Bob. Each provided a different piece of the Letterman puzzle. Ruth Lyons was a pioneer who invented the talk show from scratch and ran it with an iron first, albeit one that held a microphone concealed by a fake bouquet. Celebrities visited, but her program was more woman’s club than variety show. Letterman’s mom, Dorothy, was a huge fan of Lyons’s 50-50 Club, and she got her son hooked on the talk show format.

In 1967, Lyons retired and former “boy singer” Bob Braun inherited her spot. When I was playing on the Braun show in the late ’70s, what stood out for me was how thoroughly the host occupied Planet Show Biz. The laid-back epitome of ’70s polyester cool, Braun was always completely relaxed, completely in control, and supremely self-confident. One moment he’d be chatting with Katie about the finer points of bluegrass, the next, suavely pitching toilet tissue to the housewives at home.

When Letterman was starting his TV career, the rookie Indiana weatherman would make the pilgrimage to WLWT studios to watch the Braun show being made, learning the nuts and bolts of big-time TV. What he seems to have gotten from Lyons was her way of owning the set, of occupying the show with the sheer force of personality. From Braun, it was that loose, informal way of coming into people’s homes, and the overall sense of community, the feeling that Braun’s “girl singer” (the late, great Mary Ellen Tanner) and his “boy singer” (Rob Reider, the Queen City’s answer to John Denver) were part of his TV family. Letterman’s crew, from writers to cue-card folks to stage hands, were all famously utilized as on-screen personalities.

But the Letterman world view of Planet Show Biz seems to have been shaped most of all by Paul Dixon, by far Cincinnati’s weirdest TV icon. “Paul Baby,” as he was known, sported the strangest hairpiece this side of Donald Trump and had a leering shtick that made Don Draper seem like Gloria Steinem.

Everything he joked about was suffused with sex, though sanitized for 1950s and ’60s Cincinnati sensibilities. Dixon’s memoir was entitled Paul Baby: Confessions of the Mayor of Kneesville, after all, referring to a daily bit in which he eyed the legs of his female audience through binoculars. He also gleefully waggled prize kosher salamis at the ladies in his audience, a routine that Letterman would later copy in his own (less Freudian) way, handing out canned hams to both women and men.

The Paul Dixon Show is remembered for relentless repetition, every day filled with the same running gags, but his most famous one-time bit was “The Chicken Wedding.” Dixon had a rubber chicken he used as a prop for Kroger commercials, tossing it over his shoulder when done (shades of Letterman’s pencils and index cards). One day, with much fanfare, two of his rubber chickens got married. It was Dixon’s all time top-rated episode.

But running gags and general weirdness aside, it was Dixon’s refusal to take the role of TV host too seriously that seems to have made the deepest impression on Dave. On the air, Dixon was fond of calling his program “this dumb show”—a self-deprecating (and sometimes self-lacerating) description that Letterman applied to his own broadcast. Despite the late-blooming of a somewhat kinder, gentler TV version of Dave over the last year, he couldn’t go into that good night without one more dig at himself. “We’ve done over 6,000 shows,” he said during his final goodbye. “I was here for most of them, and I can tell you, a pretty high percentage of those shows absolutely sucked.”

And that’s where the whole tri-state/Midwestern thing seriously comes into play. Letterman didn’t come from a show-biz family. His dad was a florist and taught his son to respect work; all three Cincinnati hosts worked very hard, making 90 minutes of TV five days a week. You can see Letterman’s Midwestern values in how he treated his guests. He had no patience with “celebrities” who were famous for being famous, people like Paris Hilton, or shallow pop stars of any generation, from Cher to Madonna to Justin Bieber. He was late-night’s best interviewer and he liked smart, multitalented, reliably funny guests like Bill Murray, Steve Martin, and Tina Fey. Newsmen like Tom Brokaw and the ill-fated Brian Williams were also favorites. That attitude extended to musical acts. He picked Paul Shaffer to lead The CBS Orchestra, and Shaffer brought along a rotating cast of musical guests just to sit in, Bootsy Collins among them. Most famously, Shaffer sparked a comeback by Darlene Love, who was cleaning houses before she became the star of the Late Show’s annual Yule extravaganza, singing “Christmas (Baby, Please Come Home).”

Part of those booking choices was to please Letterman, but part was the biggest lesson learned from Paul-Ruth-Bob—a host genuinely cares about his/her audience. They were stand-ins for viewers, of course, but it was also just Midwestern hospitality: Whether it was Lyons’s ladies club, Dixon’s aggressive flirting, or Braun’s relaxed chat, the audience was the most important guest.

For Letterman, that was true to the end, right down to the way tickets were distributed. My wife, Marsha, and I had planned to be in New York around the time of the last Late Show, but we figured the finale would be invitation-only. Amazingly, tickets for the May 20 broadcast were given away like every other night: Sign up on the website and you get a call a few days beforehand. Answer a David Letterman trivia question correctly and you’ve got tickets. That way, Letterman was assured only true fans would be in the audience.

Admittedly, for the last show, questions were really tough. Ours was “Who is Sue Hum?” She’s in charge of wardrobe and has only appeared in a few onstage bits. Luckily, I’m a Letterman geek, so that final Wednesday afternoon, we lined up with our fellow fans, faithful to the end.

Inside, the last Late Show was stripped down to the most elemental Paul-Ruth-Bob equation: host, band, audience. Other than his all-star Top 10, there were no celebrity guests promoting their latest whatever. Instead, Letterman chatted with the crowd for about 10 minutes, then announcer Alan Kalter kicked it off. But instead of the usual joke (“And now, the hairdresser of Seville…”) Kalter’s final introduction was David Letterman’s most basic truth: “And now, a boy from a small town in Indiana…”

He’s traveled a universe away, but the connections to that small town were easy to see in that last TV hour, which he told the audience was “the most important show of my life.” Like the host, it was smart and funny and packed an emotional wallop without ever getting sentimental.

David Letterman and TV grew up together. Today, the networks are hanging on, fighting a rearguard action against DVRs and on-demand streaming video. Sports, awards shows, and viral YouTube clips are about the only globally-shared TV experiences left. When the cameras turned off and that boy from Indiana left the Ed Sullivan Theater stage for the last time, he didn’t leave alone. He took Paul, Ruth, and Bob with him. 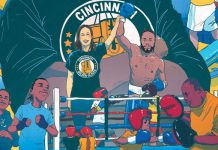