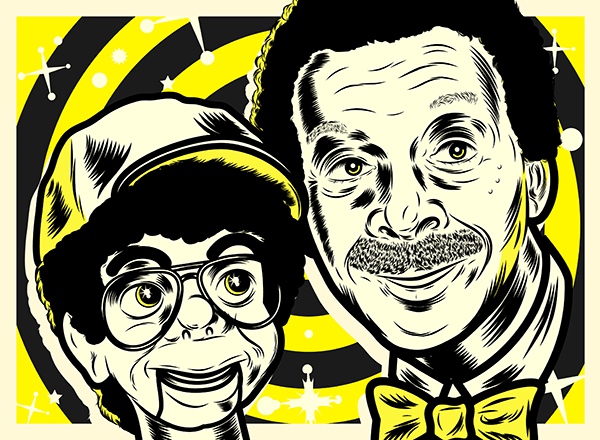 At a time when African-American faces weren’t much on TV, Willy Tyler was all over it in the 1960s and ’70s, a ventriloquist who yukked it up with his wooden, Afro-ed sidekick, Lester. At 74, Tyler is still working, and will be the guest of honor at the Vent Haven Museum’s annual convocation of ventriloquists, in New Hebron, Kentucky, July 16–19.

Tyler met his lifelong buddy with the help of an elementary school teacher. It was 1950s Detroit, and Tyler was drawn to a correspondence course in ventriloquism by a teacher. He ordered a “character” (ahem, not a doll) from a catalog. All the characters in the catalog were white; when his came in the mail, his teacher painted it black.

“We were trying to name him,” Tyler recalls. “Then my brother came home from school and said, ‘I got it. There’s a guy from study hall who sort of looks like him, and his name is Lester.’ ” Two stars were born.

Tyler was the house ventriloquist for Motown, opening the road show for the Miracles and Marvin Gaye. He even cut an album, and you have to be good to be a ventriloquist with an album. “When I meet people they always say to me, ‘Where’s Lester?’ Of course you make up stuff—you don’t say ‘He’s in the suitcase.’ You say ‘He’s watching TV,’ or ‘He’s playing chess.’ You pretty much ruin the image if you say ‘He’s in the suitcase.’ ”

He’s played Vegas, been on The Jeffersons, and was the very first performer featured on David Letterman’s Ventriloquist Week. The art form is doing fine, he says, noting Jeff Dunham’s celebrity and Terry Fator’s showroom at the Mirage. But talking without moving your lips is not quite the road to success it once was.

“It still works but it’s a situation where people are pretty much savvy to what’s going on now,” Tyler says. “It was interesting before and it’s still interesting, but it’s not quite as exciting—people are a little jaded with the smart phones and the smart cars and that kind of stuff.”

Illustration by Diego Patiño
Originally published in the July 2014 issue