1. They have been together since they were 14.
Allaer and Bladh started playing music as classmates at Ursuline Academy, where they would go on to be co-presidents of both the Young Democrats Club and the student council (until Bladh got too many demerits).

“But I consider Leggy our first band because we really weren’t involved in the local music scene,” says Allaer. “We basically just played with each other in our basements.” 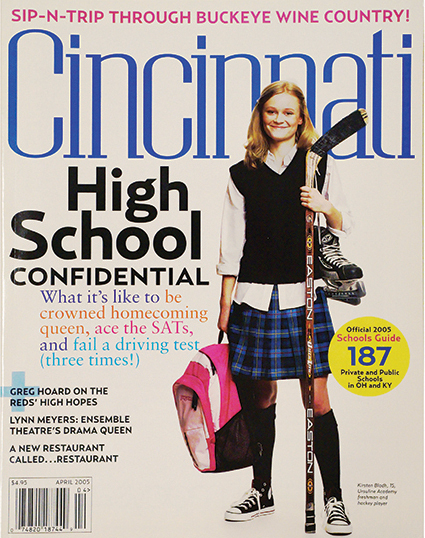 2. They once graced the cover of Cincinnati Magazine…sort of.
As a 15 year-old co-ed ice hockey player with purple-streaked hair, Bladh—nee Kirsten—was interviewed for a 2005 feature in the magazine about the lives of local high school students. It was somewhat mortifying for her at the time, especially since Campbell worked at the Harpers Point Kroger, which had a life-sized cardboard stand-up of the cover on display (until someone stole it).

“I try to own it now,” says Bladh. “I’ve put it on Facebook and people don’t believe it was real.” She also had to explain that the cover tag line referenced other interview subjects who were part of the same story, not her. “It was kind of misleading because it said, What it’s like to…be prom queen, ace the SATs, and fail your driver’s test three times.

3. They grew up on post-Y2K indie rock
Bright Eyes, Death Cab for Cutie, Interpol, the Vines, the Strokes, the Von Bondies. “That’s how I learned to play guitar,” says Allaer. “Which is why all of our songs are still, just, power chords.”

4. Collectively, the band encompasses every character in the Breakfast Club
As the movie poster put it: “a brain, a beauty, a jock, a rebel, and a recluse.”

5. Bladh’s father Glenn is a longtime local soundman
He worked at Bogart’s in the late ‘70s and early ‘80s, roadied for the Grateful Dead, Pat Benatar, and the J. Geils Band (among others), and was also behind the board at the 1998 Lilith Fair, which Allaer attended with her father, Paul. The two bandmates and their Dads also went to Bonnaroo together five years in a row. “They both just fostered and encouraged all of our creative endeavors,” says Allaer.

Bladh has also seen Bruce Springsteen with her mother Carol three times, plus the Boss was on the bill at Bonnaroo in 2009.

“He always does,” Bladh interjects.

“I took a nap on the grass, and I woke up, and he was still playing,” Allaer says.

6. Veronique’s father, Paul, is the honorary consul of Belgium for Ohio, as well as a Top 500 Amazon reviewer.
A few months ago Paul Allaer appeared on WAIF deejay Ken Katkin’s “Trash Flow Radio” (which also regularly plays Leggy) for a show devoted to the music of Belgium. On Amazon, he reviews movies, books, and music, including his daughter’s band.

“That’s how you know he has integrity as a reviewer,” says Bladh.

7. The knew John Hoffman and Jerri Queen way back when.
Hoffman (a member of the bands Vacation and Swim Team) and Queen (a member of Vacation and Tweens) are giving John Curley a run for his money as Cincinnati’s signature producer/engineers. They produced that second Leggy EP, 2015’s Nice Try (among other local releases), and have sinced helmed Wussy’s latest album, Forever Sounds.

“I am pretty proud of them for the Wussy record,” says Allaer. “I’m glad we got to work with them before.”

8. Leggy are also Wussy’s labelmates in England.
The trio’s first full-length, self-titled CD is actually a compilation of the band’s previous EPs, issued by the U.K. label Damnably, which did the same for Wussy with the 2012 compilation Buckeye. No sooner had Leggy signed the deal, in February, then they were asked to spend part of April and May touring the U.K. with Japanese legends Shonen Knife, including a triple-bill with Wussy in Bristol.

9. They like Spotify.
The sometimes-controversial streaming service (due to its allegedly limited or non-existent artist royalties) has been a good source of exposure for a little band like Leggy. “Putting our band on Spotify was a big step forward,” says Bladh. “It suggests our band to people listening to other, similar bands.”

10. Two things they love about the Cincinnati scene:
“I think it’s awesome a lot of the really active bands in Cincinnati are female-led, which is super cool,” says Allaer. “Electric Citizen, obviously Wussy, Swim Team, Tweens.”

“And the age range [of bands] is unique in Cincinnati,” says Bladh. “When we play in other cities it’s usually all 20 to 30 year-olds, but in Cincinnati there’s both young kids and people in their 30s and their 40s making great music.

11. Bunbury is a feather in their cap.
Touring around the country, Leggy have run into some of their Ursuline classmates, but playing a big music festival takes things to a whole different level.

“We had a lot of people contact us after the lineup was announced,” says Allaer. “Like, oh my God, you’re playing Bunbury.”

“It’s very different from a MidPoint crowd,” says Bladh. “There are more families, and adults who normally don’t go out late at night. My third-grade teacher contacted me and said she’d be there.”