Let’s not sugarcoat it: FC Cincinnati has fallen flat on its face lately. The Garys followed up their midweek stinker at Seattle with a calamitous 3-2 defeat to offensively challenged Chicago on Saturday night, sending a raucous TQL Stadium crowd home deflated and disappointed. When the final whistle blew, one couldn’t help but wonder if FCC had picked the worst possible time for its 11-match unbeaten run to end.

And yet a win or a draw at league-worst D.C. United on Sunday afternoon will grant FC Cincinnati automatic passage to its first-ever postseason. A spate of favorable match results with playoff implications has aided FCC’s cause. Furthermore, there’s a scenario in which the Orange and Blue lose Sunday and still make the postseason.

Here are the Eastern Conference standings entering MLS Decision Day 2022 for the squads still mathematically alive for the playoffs. 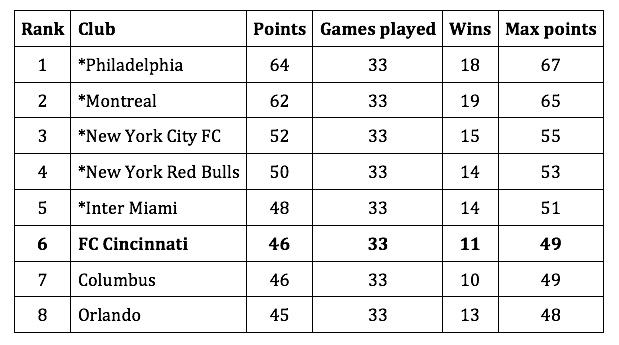 A victory or a draw over D.C. United should be a Sunday walk in the park, right? Similar logic could have been applied to the home finale against Chicago. Instead, the FCC whiffed on a handful of golden first-half chances and allowed three goals in 19 minutes in the second half en route to their first loss since July 17.

In retrospect, it’s difficult to pinpoint the cause of Cincinnati’s egg-laying. I don’t believe the gravity of the moment impacted FC Cincinnati. Instead, I’d pin the poor showing on frustration with the missed scoring opportunities, perceived screw-ups by match referee Lukasz Szpala, and time-wasting chicanery by Chicago, the latter of which started in the first half.

A sellout crowd of 25,316, the largest to witness an FC Cincinnati match this season, was stunned after Chicago struck in the 56th, 59th, and 75th minutes, taking advantage of chaotic transition defending and, at least for the third goal, questionable decision-making by rookie goalkeeper Roman Celentano.

Lucho Acosta and Brandon Vazquez pulled goals back in the 78th and 89th minutes, respectively, but the Orange and Blue couldn’t complete a miraculous comeback. The end of the match was chaotic, as the shoving match between the two sides led to a red card for FCC’s Sergio Santos, who will have to sit out against D.C. United.

The early results last weekend went as poorly as possible for FC Cincinnati. On Friday, Inter Miami’s Gonzalo Higuain—who registered a hat trick against FC Cincinnati earlier in the season—notched an 89th minute winner at Toronto. On Saturday, Derrick Etienne, who played in five matches for FC Cincinnati in 2019, saved Columbus’ bacon with an equalizing 89th-minute score vs. New York Red Bulls and a match-winner four minutes later in stoppage time.

Then, suddenly, FCC received a massive assist from New York City FC on Sunday, which rallied past Orlando for a 2-1 decision. That result ensured that FC Cincinnati would clinch a playoff berth with a victory this coming Sunday, regardless of what happened in two key midweek matches.

And boy, were there fireworks on Wednesday night. Columbus led 2-0 at Charlotte after 54 minutes—the Crew’s first score was a free kick from almost midfield (!!!)—only to tie Charlotte 2-2 after conceding a 94th minute equalizer. Meanwhile, in Miami, the hosts throttled Orlando 4-1 to finalize a playoff berth.

Now for MLS Decision Day 2022 on Sunday, when FC Cincinnati could finish anywhere from fifth through eighth in the Eastern Conference. The other match of significance is seventh-place Columbus against eighth-place Orlando. Again, FCC is in the postseason with a win or a draw.

The Orange and Blue will be knocked out if they lose to D.C. United and Columbus-Orlando finishes in a draw. FCC would lose out on the first tiebreaker (total wins) to Orlando. But, as long as there is a winner in the Columbus-Orlando match, FC Cincinnati is in regardless of its result.

Got all that? Sunday promises to be supremely entertaining one way or another.

The Bengals Played All the Hits in Nashville