Home Style + Shopping When It Comes to Style, Raquel Theodosopoulos Likes to Bend the Rules

You wear many hats. You’re a retired Marine. A CrossFit athlete and coach. A business owner. You’ve climbed mountains. You have a clothing brand. You’re a student. And you model. Where does all of this energy—all of this drive—come from?

When I was younger, it was always just something that I had. I was very driven. I was a soccer athlete for my entire life. Even when I was a kid, after practice, I was staying for hours. It was just so normal for me to work for myself and do what I wanted to do.

I knew that the only way I was going to get that was through me. And so I think becoming a Marine was something very transformational of my work ethic of being like—it’s going to take whatever it takes out of you. And when you leave, you leave empty, right? So I go into every day full of energy, and I leave every day very empty. From 5 in the morning until 11 p.m., no matter what’s in between.

I go to grad school right now at Ohio State University. So I travel. And my days are so long, but it’s just like, You’re the only person that’s gonna make it pay off.

You’re one half of the Set Fire Athletics team. Tell us a bit about how that company came to be.

Set Fire Athletics came to be because at some point, when I was coaching, I really wanted to start reaching more people internationally. I have friends all over. So I just started coaching people kind of all over, in California and North Carolina, and Connecticut, and in Ohio, Michigan—all over. Then it became this thing, and I started selling clothes.

How did you get involved in CrossFit and Olympic Weightlifting?

When I was in the Marine Corps, I was deployed in Norway. I was in the middle of Norway, and some guy came to me and he was like, “Hey, you’ve gotta try this.” And I was like, “Oh, that cult thing? I’m not doing that stupid thing.” And then I tried it. And I loved it. I stuck with it throughout my whole deployment in Norway, and then I got deployed to Norway two more times after that.

Once you leave a team, you just—I needed something more. I needed a family. And you know when you go to the gym and it’s boring, and you’re just by yourself? When I went to CrossFit, people are cheering you on and they want to sweat with you and suffer with you. In the Marine Corps, you bond by suffering. It’s the same thing with CrossFit. You bond by suffering.

There was one year we were doing training in the Marine Corps and we had to climb a mountain. When I went into the Marine Corps, it wasn’t the most friendly to women at the time.

We had to climb 13 miles up in negative 10-degree weather with over 110 pounds on our back. They put me on a team of all women, expecting us to fail. So there were five women on my team. We basically carried a sled with 110 pounds on it. You’re supposed to rotate through those five people. It ended up that my entire team almost didn’t make it.

They wouldn’t have made it if I didn’t carry this sled by myself. I was the only Marine out of all those people to carry the sled up those entire 13 miles. It was the most horrifying three days in my life. That was something that was—it’s a callback to your life, right? When you go through hard things, you’re like, Yeah, but I fucking did that.

How would you describe your personal style?

I’m a gender-bender. I don’t like rules. I bend the rules.

On your Instagram, you recently talked about how suits are the piece of clothing that make you feel undeniably powerful. What is it about suits that gives you that confidence?

I think it’s because they were meant for men. When you think of corporate—when you think of a CEO, you think of a guy standing in a suit at the top of a building, looking out of a beautiful window, right? So when I put on a suit, I think people look at me differently. I love that. I love that they’re taken aback and they’re like, Wow, what are they wearing that? Is that a dude? People compliment me the most when I’m wearing a suit. It makes me confident. I think that it brings me power knowing that this world does not revolve around what you were made of. 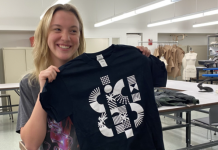 A ‘Slow Fashion’ Revolution in Cincinnati