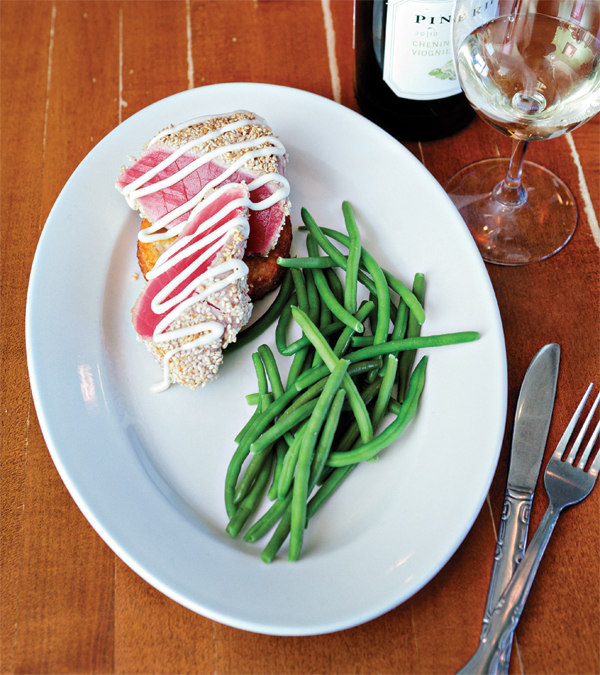 Can I have a bit of that pork shank?” I asked my friend, who had not said a word since the plate hit the table. Without waiting for him to answer, I grabbed my knife and reached over a few glasses. “You won’t need a knife,” he said. Dubious, I stuck the shank with my fork and pulled. Behold, the meat lifted from the bone as if it were cotton candy pulled from a little cardboard cone. What was true of the shank (that it was cooked to perfection and earned resounding praise from the table) was true of everything we tried at Dilly Café, from the hearty meatloaf to the pot de crème. After we devoured the beer cheese appetizer—a spicy blend of lager, spices, and cheddar and cream cheeses—we were graced with its presence on the bourbon burger beneath a bourbon, bacon, and onion jam. The 20 or so mussels in white wine butter sauce were quickly demolished—I even considered tipping the plate back to drink the buttery liquor straight. But the best items of the night were that heavenly shank with navy beans and the skirt steak with chimichurri sauce, a mix of cilantro, parsley, white onion, and lime juice. Clearly, executive chef Eric Vice and sous chef Phil Kurtz know their way around a cut of meat. Dilly also knows how to take care of their customers. The environs (a long room with a bar and beer racks on one end, a deli and kitchen along one wall, and tables everywhere else) are lively yet intimate; the service helpful, attentive, and friendly. I knew Dilly for its reputation as a beer-lover’s paradise—hard-to-find Scottish, English, and Belgian Ales and the finest in American craft beers—but I didn’t know that even a glimpse of the menu would have my mouth watering for more.

Originally published in the January 2012.