The bier, the band, and the benches are what make Hofbräuhaus Newport so unforgettable. With live music nearly every day of the week, it’s not uncommon to see patrons singing and dancing on top of the long wooden benches that typically serve as seating. This inviting, energized atmosphere helps create a strong sense of community among those who visit. “The best thing about having a German bier is the camaraderie and the friendship,” says Brewmaster Conrad Freihofer, who’s worked at Hofbräuhaus Newport since it opened in 2003. The next best thing, he says, is the bier itself.

Thanks to its close working relationship with the original Hofbräuhaus in Munich, which opened in 1589, Hofbräuhaus Newport brings 430 years of brewing experience to the tri-state area. All biers are brewed on site and adhere to Reinheitsgebot, otherwise known as the Bavarian Purity Law, which dictates that German bier must be brewed using only four ingredients: water, barley, yeast, and hops. To ensure Hofbräuhaus Newport follows these standards, Freihofer regularly sends bier samples to a lab, which are analyzed and reviewed by a team at Hofbräuhaus München. By adhering to these German brewing standards, Hofbräuhaus Newport consistently produces clean, refreshing, and easy-to-drink biers without any additives or extra coloring, Freihofer says. With two rotating biers and three mainstays, Hofbräuhaus Newport always has five Bavarian biers on tap. Here are the five you should try this month.

Freihofer’s favorite and Hofbräuhaus Newport’s bestseller, this malty, full-flavored lager has a straw-yellow color and crisp finish and is light on the hops. At 5.2 percent ABV, Freihofer calls it a session bier, meaning “you can drink it all day and feel pretty good.” It’s also the very bier that catapulted Hofbräuhaus München to fame in 1589.

This fulfilling wheat bier is “a different animal,” Freihofer says. At 5.4 percent ABV, it’s brewed with an ale yeast that produces a banana and clove flavor and aroma, with a hint of sweetness. Some say it tastes similar to Juicy Fruit Bubble Gum or circus peanuts, Freihofer adds. It’s also unfiltered, which gives it a cloudy yellow appearance.

Dunkel translates to “dark lager” and is brewed using a darker malt, which gives it a brown color. But don’t let the color scare you into thinking it’s too heavy to drink, Freihofer says. At 5.5 percent ABV, this medium-bodied bier has a roasted chocolate and caramel flavor profile and is slightly sweeter than the Hefe Weizen.

November’s seasonal bier is the Dunkel Weizen, and it’s exactly what it sounds like: an unfiltered dark wheat bier. At 5.4 percent ABV, it blends the dark roasted chocolate malt base you taste in a Dunkel with the fruitiness of a Hefe Weizen. As a result, its brown color is a slightly lighter than the Dunkel but has a cloudy appearance. Check out the full list of Hofbräuhaus Newport’s seasonal biers.

In addition to the seasonal biers, Freihofer fixes a brewmaster’s special each month. At 8 percent ABV, his November Doppel Bock is a rich, full-bodied bier with a complex flavor profile consisting of licorice, raisin, chocolate, caramel, and toasted barely malt. “Ours has a lot of licorice in it this time,” Freihofer says. The bockbier also has a fine hoppy finish and a dark brown color.

Click through our gallery to view more photos of Hofbräuhaus Newport and its brewing process: 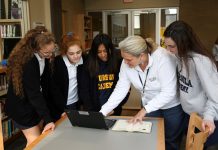 Saint Ursula Academy Supports Students Every Step of the Way 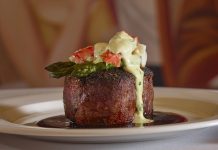