Twenty-one years ago, Matthew Broerman left his family’s farm in Fredricktown, Ohio and moved to the bustling Queen City to attend the University of Cincinnati’s College of Design, Architecture, Art, and Planning. After earning a graphic design degree in 2003, he worked around the city for 15 years. Now, the self-taught printmaker spends his time creating abstract linocut prints at his printmaking studio, Ink + Craft.

“As I progressed as a designer, I got more involved with mentoring other designers and sort of got away from the day-to-day making of things,” Broerman says. “I’m a maker. I’ve always liked making things…printmaking became an outlet for that.”

Broerman and his wife Ariana, who’s also a DAAP graduate, launched Ink + Craft two and a half years ago as a way to explore this outlet further. Though neither of them formally studied printmaking, they’ve been able to use graphic design principles like composition and color theory to add depth to each print, which takes roughly 10 hours to complete.

“[Printmaking] is a medium that lends itself to the type of art that we like: a modern, contemporary, bold display,” Broerman says. Inspired by Pablo Picasso’s Cubism, Broerman uses clean lines, sharp shapes, and vivid colors to merge graphic design principles with printmaking techniques and create a unique, modern style.

This style is especially seen in “The Hitter,” one of Ink + Craft’s bestsellers, which has also invoked a sense of nostalgia among his clientele. “[Its popularity] probably has a lot to do with regionality; it’s a red baseball player, and that’s pretty popular around here,” Broerman says. “I grew up in sports. I think a lot of people have the same experience that I’ve had, and I like making prints that remind people of their favorite memories growing up.”

“The Hitter,” which depicts the iconic image of a baseball player mid-swing and separates each shape to create a new type of movement, is just one piece in Broerman’s latest athletic series. “[Athletes] have these really interesting forms when they’re in the movement,” he says. “Their bodies are torqued; they’re human but they look a little weird. I like playing with those forms.”

Pieces like “The Hitter” can be seen at art shows and fairs throughout the midwest. Ink + Craft will make appearances at the Milford Art Affaire on September 28 (11 a.m. to 5 p.m.) and the Hyde Park Square Art Show on October 6 (10 a.m. to 5 p.m.). Prints can also be purchased online.

Beyond Bollywood: 2000 Years of Dance in Art Debuts at the Cincinnati Art Museum 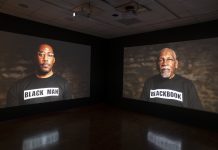 Michael Coppage Takes a Stand with His Art