Home Culture These Are the Coolest Treasures in the Cincinnati Public Library System, According...

“We were the first library in the nation to circulate recorded music, in 1947,” reference librarian Christopher Smith rattles off. He has easy access to dates and numbers like that, which he pulls up as easily as he takes a breath.

Wessels and Smith recently shared some of the more unusual and unexpected items in the collection. Is this a comprehensive best of list? Well, no. With nine million items and counting, that’s not quite possible. Consider it more of a really cool stuff list.

… book in the collection is a 26-page book of the alphabet that will fit on the tip of your finger. To read it, you’ll need a microscope and, to turn the pages, a special tool.

One of the rarest, most valuable …

… collections at the library is an original set of Birds of America by John James Audubon. Only 175 copies were originally printed in the 1820s and ’30s, Wessels says, and it’s unknown how many have survived.

“It’s become one of the most valuable pieces in the collection,” Wessels says. “Now it’s worth untold millions.”

The book is typically on display in a case, and librarians would don gloves to turn the page each Monday morning to showcase the beautiful illustrations. The book is not currently on display due to construction, but digital versions are available online.

… of an American city is of Cincinnati, and it’s at the library. Thanks to some super sleuthing by librarians in the 1940s, Wessels and Smith know the photo—called the Cincinnati Panorama of 1848—was taken Sunday, Sept. 24, 1848, at 1:50 p.m.

The image, a panorama daguerreotype (an early process for taking photographs, known for its phenomenal clarity), shows riverboats and was taken by Charles Fontayne and William S. Porter. One of their grandsons brought the image to the library in 1912 said, “I don’t want to get rid of this and thought you’d want to hang it up.”

In the late 1940s, Smith says, the library began to research the photo. Librarians looked in newspapers, which listed all the ships in port daily, and found just one list that included all the boats in the photograph. They were able to ID the approximate time of day after the photo was sent to Rochester, New York, to be cleaned and digitized, allowing librarians to zoom in on the clock tower, which reads 1:50.

… is Phillis Wheatley’s Poems on Various Subjects, Religious and Moral. Wheatley was a slave in Boston in the late 1700s, during a time when it was uncommon to find slaves in the north. The family that enslaved Wheatley taught her to read and write. When she wrote a book of poetry, the family knew it could not be published in the United States. The son took Wheatley to England, where the book was published in 1773, bound—as was the trend of the time—in human skin. 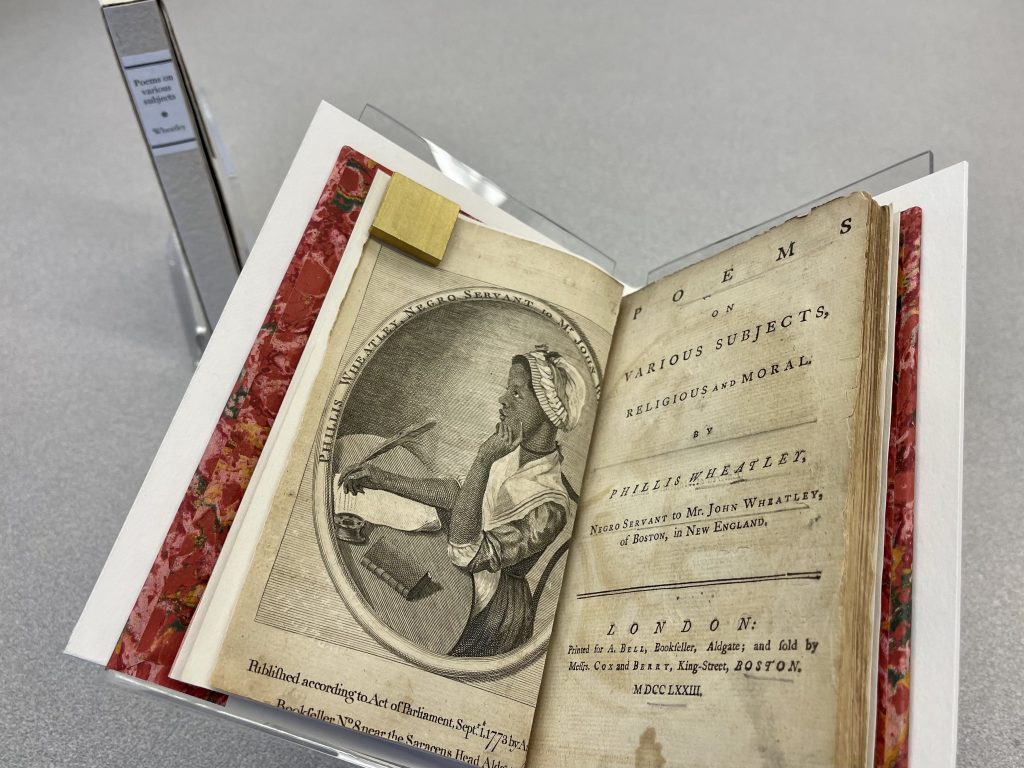 “It’s leather, but it’s human leather,” Smith says. “That’s why people usually come in and want to see this book.”

Upon return to Boston, Smith says, the family freed Wheatley. As a Black woman with no money during that time, there weren’t many prospects for her, and she died at 30, penniless.

“She had a tragic life, but she wrote these amazing poems,” Smith says, and they still touch people today. He recalls showing the book to students recently and watching a group of young men reading it (well, a facsimile of the original) for over a half hour. “They were enamored with it. [People] usually never heard of Phillis Wheatley. They left the library knowing something about this author they had never heard of.”

Summerfair Supports and Uplifts Local Artists in Every Season