You know Steve Meller and Colleen Haight’s house is cool when you notice that the two stone dogs guarding the front door are each wearing a pair of black sunglasses. Don’t let that touch of whimsy fool you, though. Meller and Haight take this historic Glendale home very seriously. Since 2003, Meller, who bought the home during his bachelor days, has been more than just the owner of what’s known as the Gordon House (it’s listed on the Glendale Historic Register); he has been its steward. “I think that’s important when you buy an historic home,” he says. 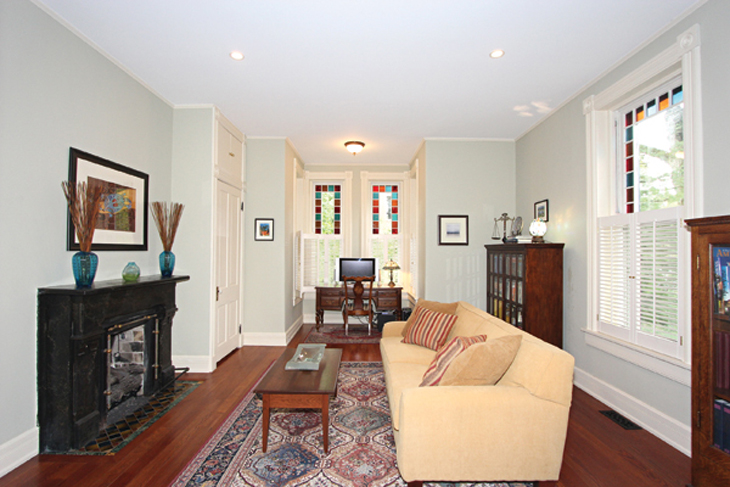 Developer Thomas Gordon built this prospect house in 1884. When no one bought it, Gordon packed up his own family and moved them in instead. The handy homebuilder also made furniture in the home’s basement.

When Meller purchased this 6,000-square-foot house 119 years later (he moved from a 109-year-old Pleasant Ridge home), it had been kept up, he notes, “but not fastidiously.” Meller got right to work checking off virtually every thinkable item on the home’s lengthy to-do list. The entire roof was redone (including new hand-made copper dormers), the whole top floor was re-plastered and finished into a five-room suite complete with 12-foot-high ceilings matching those on the first two floors, and the entire walkout basement was waterproofed and turned into a sizable greatroom with a chic wine tasting area. (It’s now on the market for $675,000.)

Despite the extensive renovations, Meller was careful to maintain as many original features as he could. “This house is not very different from a new house because of what I’ve done to it,” he says. Indeed, the Gordon house has had so much done to it, it might be better than new.