Tom Powers, one of the owners of SwingLine in Madeira, laughs when looking back on how he and his friends came to be restaurant owners.

“Back around 2000 or so, three of my rugby buddies and I decided we should look at buying a bar,” Powers says. “We went to bars a lot in those days and said we might as well be paying money in our own place. That was our stupid idea at the time. But we looked around and, after a number of years, we found a place in Loveland called Tequila Jack’s.”

The four rugby pals managed to purchase the business (a feat made easier by Powers’ career as a commercial real estate developer). Then they had to figure out how to run the place. “I think one of the four of us was a waiter for a summer or something, so we had really no experience,” Powers explains. “We had no business getting into that kind of business, but we did anyway.”

The new owners closed Tequila Jack’s, reopening it as the family-friendly eatery that Paxton’s Grill is today. The first four or five years were challenging, but eventually other businesses moved in, Loveland got a lot busier, and Paxton’s slowly grew into a local treasure. Years later, Powers and his friends purchased the restaurant across the trail, too, which they rebuilt after a fire devastated their block into Ramsey’s Trailside.

And throughout all of this, they kept an eye on Madeira, a community they felt really needed something like Paxton’s.

“Long before we bought what is now Ramsey’s, we agreed we wanted to put something in downtown Madeira,” Powers notes. “We knew it was lacking some downtown, family-friendly restaurant-type bar place. So back in about 2007 or ’08, I got voted to go in and start researching, see if we could find a place.”

Powers and his friends knew what they wanted. First, they needed to own their real estate. Second, they wanted a location in the heart of the business district—which, in the case of Madeira, is just a few blocks downtown, where the railroad crosses Miami Ave. And that tall order required patience.

“I knocked on pretty much every door in downtown Madeira over the last 15 years, asking if anybody was thinking of selling and, if they were, would they let me know,” he says. One of those doors belonged to B&B Mower Service on Railroad back in 2010. “By golly, Jerry Johnson called me about six years later and said, ‘I’ve got your card here. You asked me to call you if I was going to sell. Well, my brother and I are going to retire and sell.’”

Powers jumped at the opportunity, though it would take until July 2022 for the dream to finally become a reality. But he credits architect Mike Wentz and his builders (the main contractor was Greg Foote of Commercial Construction Group, while the interior finish was done by Tom Walter of Klotter Builders) with constructing a place that fit the owners’ bill. During the Covid pandemic, no less. “I told him I wanted to design a building that looks like it’s 100 years old, but it’s brand-new and will be here in 100 years,” he says. 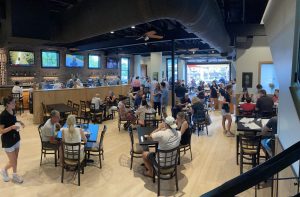 That sense of time past is important to Powers and his friends, who named Paxton’s and Ramsey’s after historic families in Loveland. And SwingLine gets its name from an old trolley car system that used to run from Norwood to Blanchester, right through Madeira. (It was called the Green Line, but folks referred to it by its owners, the Swing brothers.)

In terms of SwingLine’s food, the owners didn’t set out to reinvent the wheel—they know from years at Paxton’s that people like to come out for a cheeseburger and beer. But the head chef, Kenny Arnold, added some unique touches while manager Luke Rudd and the owners pushed for some healthier options than their other menus have seen.

“A lot of people want a cheeseburger, fries and a beer, and we have that,” Powers says. “But we wanted to be family friendly, so we have bowls and healthy foods. We actually have a separate grill and hood for our vegan food. My wife wants to go to a vegan restaurant, and there’s nothing there that I like. I want to go to one that’s not, and she doesn’t want to go there. So why can’t we do both?”

Powers says the initial response has been positive, and as SwingLine hires more staff, he hopes to be open seven days a week for breakfast, lunch, and dinner. Until then, he’s just focused on what’s worked since he and his friends first purchased Tequila Jack’s.

“The whole key for all three of our restaurants is service, good food, and a cool venue,” he adds. “That’s as simple as our strategy is.”