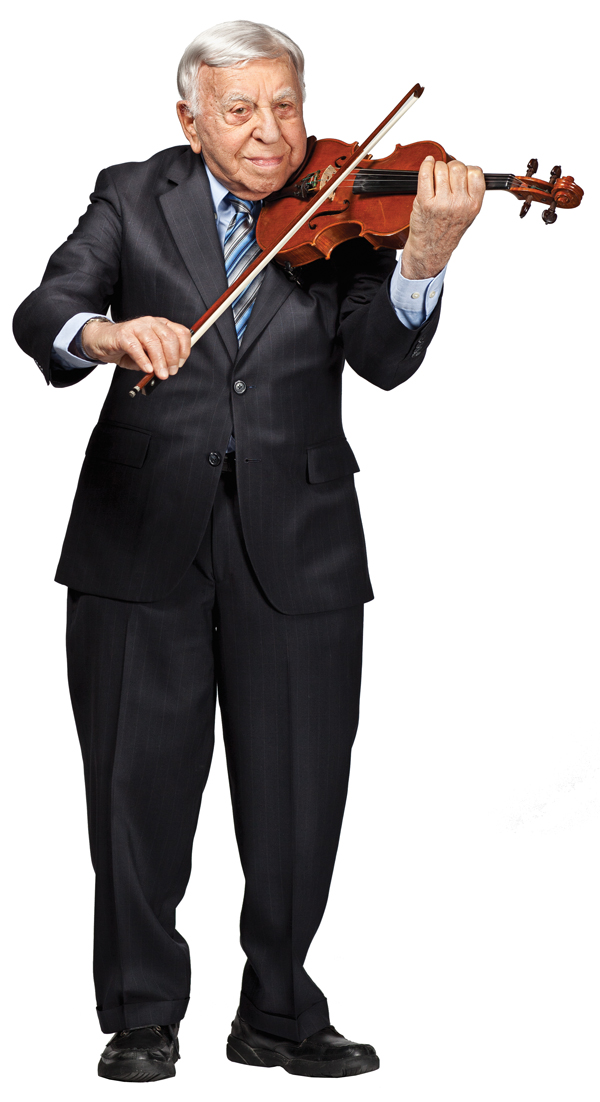 A former co-owner of Buddy Roger’s Music stores, this 94-year-old began his musical career in 1936.

In the 1940s I played the radio stations when they had staff musicians. I played Beverly Hills Supper Club, the Lookout House, the Albee Theater, Coney Island, you name it. At the Netherland Plaza they had an ice show—like a nightclub show, but on ice. I played three ice shows a day. Then the music business started to die.

I retired in 1997, I think it was, from Buddy Roger’s Music. About five years ago I got a call to play a private party at Pitrelli’s. Now I play there three times a week.

People like show tunes. “The Sound of Music”is a biggie. I get a lot of requests for “The Devil Went Down to Georgia” and “Orange Blossom Special.” I play Fiddler on the Roof a lot, too. Once in a while someone will ask for some Mozart, but it’s rare.

How do I remember so many songs? I don’t know the answer to that. But that’s not so unusual for a musician.

When I play, I’m standing for two and a half hours. I’m really exhausted when I’m finished. But there’s no question that playing has kept me active. Otherwise I would just sit and nap.

I played a job the other night that was just perfection. On the way out, people shook my hand and thanked me. That’s what keeps me going.

A Fine Vintage
Shallat owns two violins. One is believed to have been crafted by master luthier Carlo Antonio Testore in 1736. “I didn’t buy it new,” he deadpans.

Sidetracked Talent
At 8, Shallat’s mother sent him to Walnut Hills for violin lessons. “I had to take a streetcar,” he says. “I fell in love with streetcars; I wanted to be a motorman. If they bring
the streetcar back, I was thinking of applying. I can’t see very well, but what the heck—it runs on a track.”

Band Leader
He introduced instruments to thousands of school kids through Buddy Roger’s Music. “We would rent an instrument for 10 weeks, and hope to sell it if the student did well. We’d always encourage the band director to have a concert for parents after the first 10 weeks. Have you seen The Music Man? You know what happens: ‘That’s my boy up there!’ It’s very effective.”