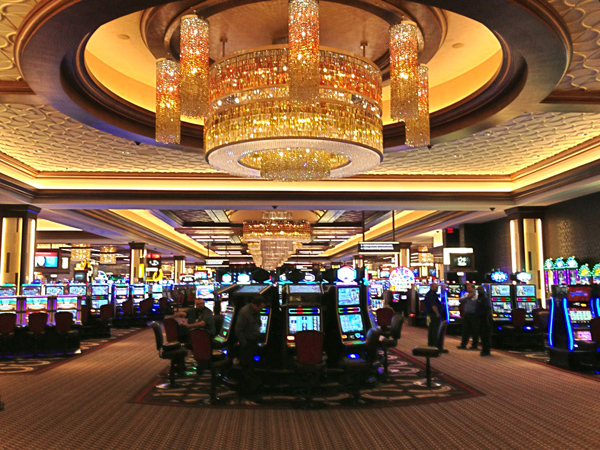 The new Cincinnati Horseshoe Casino held media tours of its spacious and well-lit gaming floor on Tuesday morning, providing an early glimpse of what the public will experience when the slots and tables open for business.

The $400-million gambling palace located at the Broadway/Eggleston/Central Parkway mashup will go live at an 8:30 p.m. ribbon-cutting ceremony on Monday, March 4, kicking off a 24/7 schedule that offers food, gaming, and entertainment at every conceivable moment.

There are a handful of public entrances to the main casino floor, including an impressive glass entryway facing out toward Central Parkway, likely to be the path of choice for patrons traveling on foot (easily accessed from the Hamilton County Corrections facility across the street!). You can also enter through the five-floor self-park garage (enter via Reading Road and Gilbert Avenue), as well as the Jimmy Buffett’s Margaritaville restaurant/tourist-magnet. The self-park garage will be free for visitors on nights and weekends, and can also be comped via the Total Rewards program, which is a Kroger Plus Card-esque system that tracks how much you spend on blackjack, Bud Lights, etc. A half-hour at the slots or tables, an hour in the poker room, or dropping at least $25 on food and merch equals free parking during weekday business hours.

The food options extend far beyond Cheeseburgers in Paradise, too. Food Network darling Bobby Flay brings his trademark Bobby’s Burger Palace, the 14th iteration of the establishment and first on Ohio soil. The Horseshoe also boasts Spread Buffet for the big eaters, Jack Binion’s Steak for the big winners, and a Starbucks for the big caffeinators. The buffet option—not to be confused with the Buffett option—looked most intriguing, with room for 400 and stations offering unlimited plates of Mexican, Italian, Asian, and local-themed fare for just under $30, including Moerlein beer and a yet-to-be-announced Cincinnati ice cream brand (though if the taped-on monikers adorning the dessert cases are any indication, it’s Graeter’s).

All of the eateries surround the ground floor’s main gaming space, as do the World Series of Poker sanctioned poker room, the gift shop, the themed and oddly named Asian Gaming Room, and the swanky high limit tables and Diamond Lounge, two areas which the media tour provided my first and undoubtedly last glimpses of. There are also escalators leading to a second floor that offers 33,000 square feet of event space, including the 1,400-seat generically named Pavilion, which is already slated to host comedian/actor/Ryan Seacrest-bully Joel McHale on April 20 and capitalization-happy IL DIVO on April 27.

But the big cheese at Horseshoe Casino is the main gaming area in the center of it all, dominating most of the main floor’s 100,000 square feet of opportunities to win big or push back your mortgage payment by a few months. Anchored by the circular Rock Bar and Lounge in the center of the room, nearly 100 table games and an ungodly number of slot machines are spread throughout, ranging anywhere from a penny per spin to $500.

Though it’s nothing extraordinary, the campus-size complex is aesthetically appealing— and very similar in appearance to Horseshoe’s Cleveland venture—indulging in lavish crystal chandeliers and dark wood tones. And while one of the few grumbles thus far from locals is the lack of an accompanying hotel, the casino does provide complimentary shuttle service and special offers through its Total Rewards program to seven partner hotels, including the Westin, Cincinnatian, Hyatt Regency, and the new 21c. Your Total Rewards points can also score deals and credits to be redeemed at numerous restaurants such as Boca, Metropole, Via Vite, Moerlein Lager House, and Montgomery Inn.

By the look of things at Horseshoe and the absence of pure dread on the faces of those milling around inside during our tour, it would appear that everything is on schedule and running rather smoothly thus far. When asked what the main area of concern was leading up to opening night, Paula Morris of Horseshoe Casino and Caesars Entertainment Corp. mentioned that “90 percent of our employees are new to the industry,” but also added that they have been training for months and will have extra managers on the floor, at least in the early going. The 1,000-plus security cameras will help to quell any worries as well. Unless Clooney plans to come home and revive his Danny Ocean character, the Horseshoe should be ready for anything come March 4. May the odds be ever in your favor.

Click here to view our gallery of pictures from inside the Horseshoe Casino.