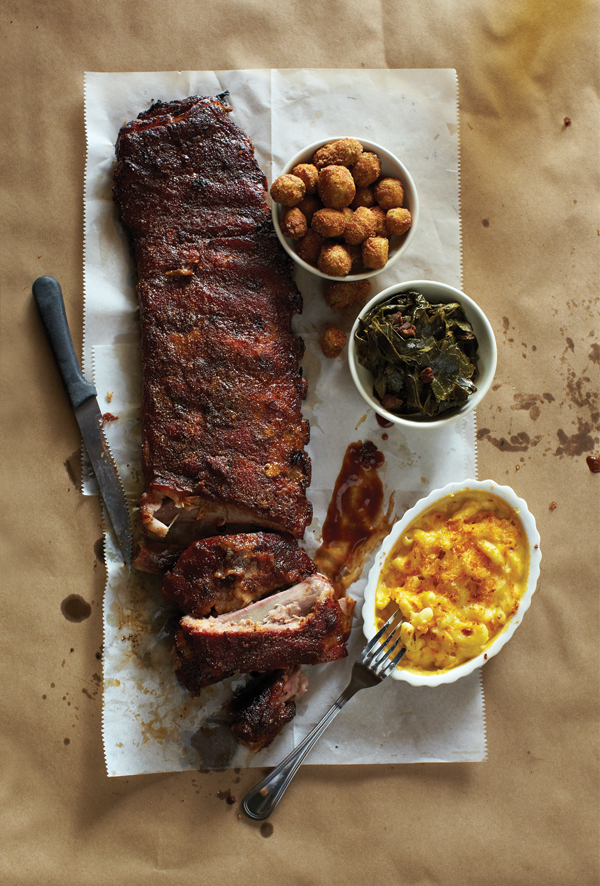 On a typical Saturday night at SmoQ, 270 pounds of St. Louis ribs, 200 pounds of baby back ribs, 150 pounds each of chicken and wings, 100 pounds of pulled pork, 65 pounds of brisket, and 35 pounds of rib tips exit the kitchen door for the dining room. That’s 970 pounds of smoked and grilled meat in one night, an almost obscene number were it not for the vast size of the restaurant: upwards of 240 seats, each one likely to fill at least two and a half times. There are other dishes on SmoQ’s menu—orange maple-glazed salmon, a bone-in pork chop, the requisite 14 ounces of strip steak (possibly the most ubiquitous menu item in the tri-state)—but sales are meager in comparison to the slow-and-low style of food made famous in North Carolina, Texas, Kansas City, and Memphis, a style so steeped in the relationship of man to fire that it’s simply known by one word: barbecue.

Let’s get this perfectly clear up front: What your father does in the backyard on a Weber is not barbecue. That’s grilling. Your dad does not barbecue meat; he prepares meat to become barbecue (in fact, the quickest way to get run out of town in some parts of the country is to use barbecue as a verb). But even then, putting a slab of ribs on the grill and mopping them with sauce may not be called barbecue. While some cultures have a rich tradition of smoking meats, and others a tradition of grilling, barbecue is what happens from our unique heritage of smoking and grilling. It is often considered—in all of its homegrown iterations—to exemplify American cooking in the same distinctive way that jazz, soul, and blues personify American music (and like those, is appreciated the world over).

The regional variations in barbecue are generally characterized by cuts of meats and sauces, from the minimally seasoned whole pig and pork shoulder of North Carolina style, with its different vinegar-y sauces, to the very distinctive mutton of Western Kentucky (an acquired taste),  finished with a black sauce made from Worcestershire and melted butter.

Wherever you are, whoever your father, take this on faith: if you unexpectedly discover a barrel smoker or pit dug in your backyard and your dad (who now insists on being referred to as a pitmaster) hauling a cord of seasoned hickory and bent over a pork butt, it is then you’ll know he has been delivered from darkness and given himself over to the church known as barbecue. Praise the lard and pass the moppin’ sauce.

SmoQ’s chef and pitmaster, Jackson Rouse, refers to his rotisserie-style smoker as “killer,” inasmuch as it makes it possible for him to serve 970 pounds of meat on a Saturday by loading it 250 pounds at a time. The woodsy scent blends with char and brown sugar (one of 13 ingredients he uses in his dry rub on the St. Louis ribs), and an undertone of cleaning solution (best guess: Windex) to linger in a thin stratosphere above the dining room. As noted, it’s a large space (the former home of a Karlo’s Bistro Italia), laid out in a patchwork of rooms furnished in the paneling and upholstery and vinyl-clothed tables of a thousand mall eateries, making it indistinguishable from the dozens of chain restaurants that surround it save for some vintage black and white photos of ’cue shacks, a damn good soundtrack of honkin’ soul and Delta blues, and as fine a brisket as you’ll eat from a non-Texan.

It is, in fact, far better than the first time we dined at SmoQ a year ago, shortly after the Springdale restaurant opened and before Rouse landed behind the smoker, when the atmosphere was redolent with inexperience and the brisket was encased in a cranberry-pink smoke ring that appeared chemically enhanced, cooked off the day before and sitting in a steam table since. It worked the jaw as much as a piece of jerky.

Great beef brisket is the benchmark for mastering barbecue. An inexpensive and ornery cut of meat with a lot of connective tissue, brisket benefits from long and slow closed-pit cooking so that those tissues tenderize and blissfully dissolve. According to Rouse, SmoQ’s first kitchen team removed the fat cap (a minimum of a quarter-inch-thick layer of fat needed to protect the meat from drying out through the long cooking process; it subsequently disappears as the fat melts), resulting in the nearly inedible meat that we pushed aside after a few bites. In fact, my guests (fine cooks and pitmasters themselves) and I found most of the meat at that first meal dry and flavorless, and many of the sides either uninspiring (would someone please ask a church lady how to make mac-and-cheese?), or cloyingly sweet (SmoQ’s sweet potato brûlée was—and sadly, still is—the frillier version of the dish we all avoid at Thanksgiving buffets).

But then along came Rouse, a Burlington, Kentucky, native who says he has been cooking “fancy southern food” most of his career at places like Iron Horse Inn (Glendale) and Murphin Ridge Inn (Adams County). He credits his mother—“a great Southern cook”—and an early education frying chicken in the deli of the family store as preparation to take command of a restaurant whose menu is defined by a strong cultural focus evoking a sense of place and homespun memories. In addition to making a fork-tender brisket (daily, thank you, as well as slicing it to order), Rouse brought the acceptable ribs up to Best In Show quality, and has snatched chicken wings from the jaws of game day snacks and released them to higher ground. Brined in a hot sauce potion for 24 hours, then smoked and finished on the grill, they are can-I-get-a-witness good, and quite possibly the best in the city.

Other notable menu items include the pulled pork, stippled with chewy nibs of bark (the crust that forms on low-and-slow meats); cheddar and bacon grits, either as a side or as a main course with sautéed shrimp and Andouille sausage; fried green tomatoes served with chow chow relish courtesy of the chef’s mother; and a chicken and sausage gumbo that earns marks as much for authenticity as it does for hearty flavor. From his 10-month learning curve, Rouse has since streamlined the menu—removing items that were either lagging in sales or simply unappealing—and fixed the mac-and-cheese. (In keeping with owner Pete Zimmer’s tagline “If it’s legal we’ll SmoQ it,” smoked food traverses the menu, including the most unfortunate slice of apple pie I have ever met. Ever. A snappy marketing slogan for sure, but some things are just not meant to be locked and loaded in the killer smoker).

The new menu (being finalized as this article went to print) puts a little more spotlight on the broader genre of Southern cuisine and leans away from a strict focus on being a barbecue joint (which the price points reflect). Not that that’s a bad thing, mind you. Where great barbecue is concerned, we’ve had trouble in River City. There’s plenty of room for more joints. But as good as much of it is, SmoQ will never be one of those—and that’s OK, too. Though I might prefer paper plates, a pile of napkins, and a picnic table along the river’s edge, the gospel of good barbecue is such that it’s a gift any way you get it. Most pitmasters argue that there are only two kinds: good and bad. And we’ll take the gift of good barbecue wherever we find it.

Originally published in the April 2012 issue.