Editor’s Note: This restaurant closed in 2014.

“Hey! Hey! Hi!” A blonde woman is waving madly at me from a bar stool as we enter Red Onion Café. At least I think she’s waving at me. I look at the line of people pressing in behind us from the entrance of the small, dark, narrow bar. No one is responding to her enthusiastic greeting. She yells a little louder; waves a little more eagerly. “Hi!” This time everyone in the packed 40-seat room looks up. I don’t recognize her, and it’s unlikely that I would know someone in a little neighborhood tavern 30 miles from my home. But anything’s possible, so I match her decibel level and wave back. “Hi!”

The Saturday night hustle is in full swing: A server scurries between us with what appears to be half of a roasted chicken on a plate. The bartender places a glass of Stella Artois in front of a customer with one hand while pouring a scotch with another, and Skid Row’s ’80s rock serenades the crowd. Heads are cocked in curiosity.

The woman shouts again. “How are you?” My confusion must show. “The gals’ Harley club? You ride, right? A hog?” Well. Now it’s settled. Customers return their gaze to chicken Caesar wraps and grilled salmon and each other. I often get mistaken for someone else—someone you might have stood up on a date or took Jazzercise with—but not a biker chick. I suddenly want to ride hard and run cool. But then, looks can be deceiving: This cozy neighborhood pub isn’t exactly what it appears to be either.

The Red Onion Café is a landmark in Monroe, Ohio, a 161-year-old establishment whose original name—The Red Onion Hotel—was derived from the practice of hanging pungent red onions on the doorway to alert often illiterate stagecoach drivers that food was being served. From the outside, it’s unremarkable: a large white brick building on a sloping lot that also houses the Brandywine Inn (the café commands the first floor). A simple white sign with a line drawing of a red onion hangs near the front door. It barely resembles a neighborhood pub, much less a café. The inside is a different story—a cozy neighborhood pub is exactly what it resembles. A penny-topped bar (the pennies—more than 11,000 of them—are encased under a half-inch of acrylic) runs down most of one side of the narrow room; padded booths line the other. Guinness and Budweiser signage mingles with community-proud historical photos. All 15 bar stools are filled with patrons watching the ball game. Bass Ales, Guinness Stouts, and highballs litter the bar top, next to plates of crisp onion rings (with just the right amount of shine) and chubby Angus burgers fully dressed. By this you could guess the rest of the menu without so much as cracking it open: loaded potato skins, nachos, chicken fingers, anything that can be dipped in batter and fried. It could be a typical scene in any neighborhood bar in any small town, anywhere. The julienne vegetables are the first clue that it isn’t.

Carrots, yellow squash, red pepper, zucchini, and red onion (red onion touches nearly every dish on the menu) are sautéed and generously draped over the café’s signature crab cake, which is itself perched on a bed of sautéed spinach, the whole thing drizzled with a house-made dijon mustard dressing. That dressing is the second clue that Red Onion is more than it seems: Pub kitchens rarely trumpet anything “house-made,” or drizzle a crosshatch pattern with a sauce bottle (a ’90s plating style that I thought was barely kept alive by banquets and country clubs). I count 11 orders of crab cakes—made with real crab meat and coated in panko crumbs—in various preparations parading by: as a sandwich with lettuce and house-made tartar sauce, as a main course, as an appetizer, and as a side to the 12-ounce strip steak. Eleven orders may not seem significant, but in a room the size of a three-chair barbershop, that’s about 30 percent of the house in the 90 or so minutes we’re there.

Crab cakes—and saucing—are something chef/manager Gary Henz knows well. Henz bought the café in 2005, and sold it to his current partner Mark Bursley in 2007 so he could focus his energy on the food. Before selling nearly 50 crab cakes the first weekend he took over Red Onion Café, he had spent 10 years catering at The Trails End in Kettering, and another 10 or so before that with chefs Georges Haidon and Jean-Robert de Cavel at Maisonette. He cites Master Chef John Kinsella of the Midwest Culinary Institute as another inspiration. “They all hammered into me that by using the freshest and finest ingredients, half of the work is done.”

But where the bar food gets a bump, several of the fine dining dishes overshoot their mark, suffer from off-balance execution, or simply have too much sauce. The manicotti came immersed in it, and would fare better with less of the aged asiago cheese, which obliterated the delicate flavor of crab and produced a grainy sauce that thickened and got grainier as it cooled (an excess of thick sauce was also a problem for the otherwise well-flavored jumbo shrimp and crab four cheese pasta).

Too much of a good thing was also the problem for a crab-stuffed Atlantic salmon (was there a deal on crab?). While the salmon was cooked perfectly, the blanket of white wine sauce and too-liberal amount of red onions in the stuffing blasted the palate and buried the sweetness of the fish. The salads are delightful, for the most part, with crisp mixed greens and snappy house-made dressings (the sweet and sour vinaigrette combined with spinach, bacon, blue cheese, and portobello mushrooms was particularly good). But on two separate occasions the slivers of pears in the smoked gouda pear salad were crisp (meaning not ripe) and therefore bland, leaving the smoked gouda and the sweet-tart apple cider vinaigrette to do all the heavy lifting. Which makes me wonder: If chasing flavor is the goal behind procuring the best and freshest ingredients, why not follow through? What’s the point of having fresh salmon if it’s buried or a pear salad minus the pear taste? But where some of the dishes fall flat, dessert rises up—three layers up, to be exact—in towering cakes: Carrot orange, poppy seed, and an impiously good dark chocolate during our visits, all layered with luscious buttercream icings.

Red Onion Café’s website proudly states on their home page: “Food is what we are all about.” Despite some bumps, it shows. It’s a wonderful mix of community, hospitality, and celebration—the kind of place every neighborhood should have.

Atmosphere
What appears to be a typical bar is anything but. 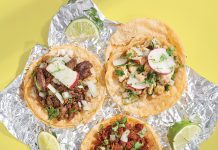 Mi Tierra Is a Grande Mexican Grocery and Restaurant