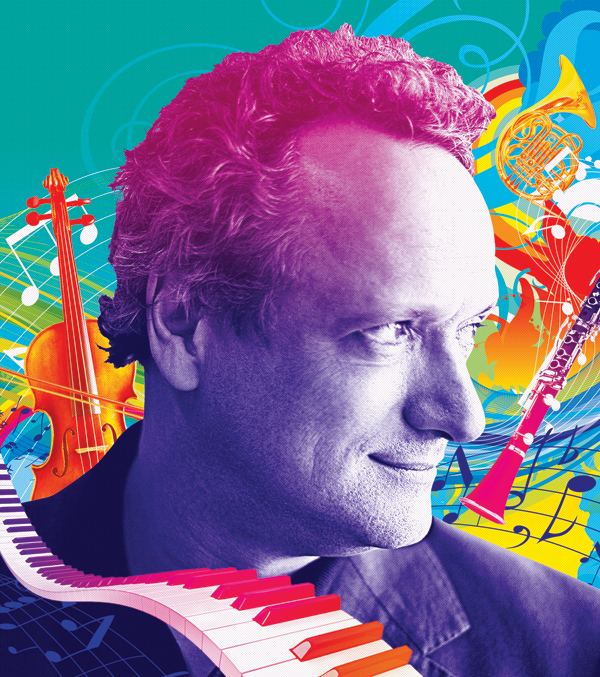 Louis Langrée borrows a phrase from the art world when asked what he’s most looking forward to as music director of the Cincinnati Symphony Orchestra. “The palette of possibilities,” the French conductor answers, referring to the collective talent of the CSO’s musicians and what he hopes to accomplish with them. It’s at the heart of why he took the job.

Although the 51-year-old Langrée, currently music director designate, won’t assume full responsibilities until next season, he returns to Cincinnati this month to lead the CSO in two weekends of concerts. Langrée is eager to begin working with an ensemble he considers rare among American orchestras. “It goes beyond just good musical technique; they have an identity and a style to their playing,” Langrée says. “I was truly amazed when I first conducted them in Brahms Symphony No. 1—the brilliance of the sound.”

Principal cellist Ilya Finkelshteyn vividly remembers that concert in March 2011, and the chemistry that developed between Langrée and the musicians. “I was stunned at how beautifully the orchestra sounded, and I know my colleagues felt the same thing,” he says. So exactly what did Langrée do to coax out such a rich, emotional sound?

“It can be a mystical thing,” Finkelshteyn says, chuckling. “Sometimes it was what he said or the expression in his hands and face. Sometimes, it was just his pure presence. I don’t know what it was really, but he got a dark, moody sound out of the orchestra I hadn’t heard in a while.”

Soon after, conversations began about making Langrée the CSO’s next conductor. In August 2011, he was invited back to conduct an unscheduled concert at the College-Conservatory of Music. The audience was packed with the city’s musical movers and shakers, including many major CSO donors. An offer was extended soon thereafter. Still, Langrée wasn’t ready to say yes just yet.

“I hadn’t been the musical director of any orchestra for six years, which was my choice,” he explains. (Langrée has, however, led the month-long Mostly Mozart Festival in New York for the past 10 years.) His self-imposed hiatus from artistic leadership addressed a dilemma that many conductors face: balancing the need to program a variety of music as an orchestra’s director with a desire to study a single piece, such as Beethoven’s Symphony No. 9, in depth by conducting it many times as a guest conductor. “But,” he says, “for more than a year now, I’ve been missing the deep artistic relationship with the musicians you develop when you have your own orchestra.”

After quietly returning last November to listen to the orchestra one more time, Langrée accepted the job. “It was very important to me that this would be the right fit,” he explains. It’s also a big move for his family, which currently lives in Paris. His wife, Aimée Clark Langrée, is a script writer for French television and author of several books, and they have two children, 13-year-old Céleste and 10-year-old Antoine. Finding a home and the right school for the kids is paramount, Langrée says. “I’m not sure of the timing when it comes to the move,” he adds. “We’ll choose what is best for them.”

Assuming leadership of his first major American orchestra is a milestone in a career that Langrée never envisioned in his days as a student at the Conservatoire de Strasbourg. “I never had a conducting lesson at the conservatoire,” he admits. Back then Langrée was a pianist who also played flute. “I preferred playing chamber music and accompanying singers,” he explains. Working with singers led to his first job at the Opéra National de Lyon in 1983. “I frequently watched rehearsals,” he recalls, “and there was a moment when I was asked if I’d like to be the assistant conductor, and I said yes.” That led to conducting performances and eventually assistant conducting posts with the Aix-en-Provence Festival, the Bayreuth Festival, and l’Orchestre de Paris.

In 1993, he became music director of the Orchestre de Picardie, and went on to lead the Opéra National de Lyon, the Glyndebourne Touring Opera, and the Orchestre Philharmonique de Liége.

“I never took conducting lessons, but once I started working, I always asked a lot of questions,” Langrée says.

“He’s very open-minded,” says Finkelshteyn, who has worked with Langrée for the past eight years as principal cellist in the Mostly Mozart Orchestra. “He certainly has his convictions, but I’ve never known him to be closed to suggestions.”

“I have a very clear idea of what I want to do [in Cincinnati],” Langrée says. “I don’t want to come to town like IKEA and do the same thing wherever I go. I want it to be a shared experience.” Like his predecessor, Langrée makes it clear that an important part of his plan is showcasing the works of young composers. “It’s an amazing tradition and an important one,” he says.

At the moment, however, he’s equally interested in learning about his future home. “I want to see museums and spend time in the streets, in the restaurants, talking to people,” he says, before quickly adding, “I already feel at home, because I’m from Over-the-Rhine, too, even though it’s not the same Rhine.” Maybe so, but it seems a good omen and reason enough to say: Welcome.

Father Knows Best
Langrée’s father is an organist and music theorist who insisted his son study music. Young Louis rebelled by attending Conservatoire de Strasbourg just to get away from home.

It’s All Relative
Aimée Clark Langrée grew up in France, but her father is an American, giving her and their children dual citizenship. Aimée began researching her family tree 10 years ago when Louis became music director of Mostly Mozart. One close family tie is with cousin Clark Johnson, best known for his role as Gus Haynes on The Wire.

Stay-cation
Traveling is part of the job, so Langrée’s perfect vacation is unpacking, stowing his luggage in the closet, then settling in for some quality time with the family.

Coming Attractions
In all, Langrée will be conducting five concerts here this month. First up is an all-French program on November 9 and 10, then Beethoven’s 9th in three concerts—November 15, 17, and 18.