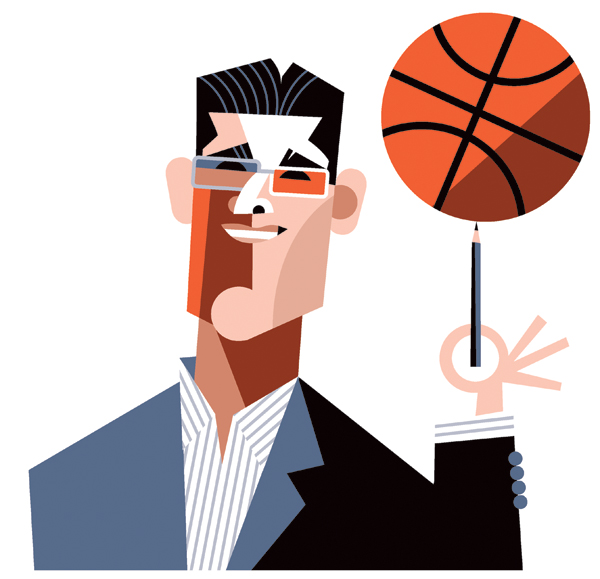 In 2002, the Roger Bacon boys basketball team won the state championship, beating St. Vincent–St. Mary in the finals. It was LeBron James’s only loss to a team from Ohio in his high school career. The story of how the underdog Spartans pulled off the upset has all the makings of a thrilling book. At least Tony Meale thought so. He quit his newspaper job to spend a year retracing every dramatic moment for The Chosen Ones: The Team That Beat LeBron (Press Box Publishing). With an NBA title and two Olympic gold medals under his belt, we bet LeBron isn’t even bitter.

What made telling this story worth quitting your job?
Being an Ohio guy and graduating the same year as LeBron, I knew who he was and was following his career before most people were. Having gone to St. X, I was following Bacon that year. I was really impressed by them and how scrappy they played. When Bacon won, it was just like, these guys are not once-in-a-generation players. They are guys from my city. They go to a school just like mine. It really felt like they were just like me. It sounds cliché and corny, but it gave me this odd sense of hope that maybe things that you think are impossible, maybe actually are possible.

What were some of the challenges you faced? I heard your car died.
I got out of grad school in 2008 and moved back home with my mom and sister. I still live at home. That was pretty key in terms of me being able to do this financially. A week after I submitted my resignation, my car died. So for the last year, I haven’t had a car. The book pretty much was my life. You learn a lot about yourself when you walk away from your paycheck. It was humbling. It was terrifying. But in the end, it was very rewarding.

The depth of your reporting was spectacular. But one of your main characters, Roger Bacon coach Bill Brewer, died a few years ago. How did you deal with not being able to interview him?
The hardest part of writing the book was not being able to experience it, to not have that eyewitness account. I had newspaper stories to connect the dots, but I was relying on the memories of people to really tell the heart of the story. I think people look at Bill in a different light now that he’s gone. He was a pretty tough coach. I think that a lot of the players didn’t really like him while they played for him. But once they got out and got some maturity, they were very glad they did play for him. Now that they respect Bill and realize what he did and why, they can’t tell him thank you.

After all you went through to write this book, what do you feel you’ve accomplished?
At the end of the day, I just wanted to tell a good story. Cincinnati sports history is fairly rich. You’ve got the Big Red Machine; our college sports are pretty solid. But I feel like for whatever reason, this is the forgotten accomplishment. Obviously, Bacon is proud of it, but the entire city should be proud. It’s our story. I just hope people read it, enjoy it, and are inspired by it.

Do you think LeBron will read it?
Last December, LeBron was listing some of his most influential experiences in life, and he mentioned that game in the same breath as growing up without a father. So I do think that loss is motivation for him. If he reads the book and sees what Bacon went through—and the fact that it wasn’t just a one-day fluke, it was an entire season in the making—I think he’ll look at that game in a different light. He’ll have a better understanding of what happened and why.