Ist going to be a big weekend for Cincinnati. From cultural fests to dance showcases, gripping dramas and soaring musical performances and a new event celebrating the city’s beverage scene, there’s loads to do in the tri-state.

The Bard’s epic tragedy gets a modern, Succession-esque twist at the Cincinnati Shakespeare Company. “Nothing will come of nothing…”

The 16th annual biking event, which supports life-saving local cancer research at the Barrett Cancer Center at UC Health and partner health systems, features new routes beginning at Yeatman’s Cove and along the Ohio side of the river. A rider party kicks off the event on Friday before races begin Saturday.

Sept 16–18, Second and Third Streets between Walnut and Elm, downtown

Cincinnati Pops “Hear Me Roar: A Celebration of Women in Song”

John Morris Russell and the Pops start their season with a celebration of the iconic divas of soul, pop, Broadway, R&B, and jazz. Vocalists Aubrey Logan, Erica Gabriel, and Mandy Gonzalez join the Pops for songs from Broadway favorites including Hamilton and Funny Girl, plus pop hits by Carole King, Aretha Franklin, Dolly Parton, Whitney Houston, Sara Bareilles, and others.

Music in the Woods 20th Anniversary

From Dewey’s to LaRosa’s to Taglio and so much more, Cincinnati’s pizza scene is as vibrant (and tasty) as ever. Join Cincinnati Magazine at Yeatman’s Cove this Wednesday for unlimited slices of the city’s favorite pies and discover your next go-to delivery spot. Proceeds from this annual pizza event support research at the UC Cancer Center. 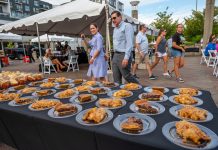