I once walked among the Proctoids. Don’t worry, my exposure left no lasting damage. For those unfamiliar with the term, Proctoid was a pejorative nickname for the typical Procter & Gamble conformist robot. That reputation has since faded, but P&G shouldered it for most of the 20th century—a rigid code of rigid work methods, rigid dress, and rigid hair. Much of corporate America was this way back then, but Procter & Gamble just had to be No. 1, didn’t it? If a can of Pringles showed how potatoes could be compressed into a nested stack of identical pretend-chips, P&G showed how employees could be compressed into a nested stack of identical pretend-humans.

This stereotype was already in decline when a ray from the Proctoid phaser first grazed me. Fortunately, I was mostly unaffected because I never had been an actual Procter & Gamble employee; I merely provided freelance writing and music for some of their brands during the 1980s and ’90s. Just to be safe, I still wore a sport jacket and tie whenever I’d visit the Dolly Parton Towers (a name many locals gave the P&G buildings downtown at Fifth Street and Broadway).

My story begins, of course, with soap. Procter & Gamble’s world conquest owes everything to soap. In periods of growth they expanded into things like peanut butter and coffee, and during the overreach years even stationery and batteries, but whenever times required belt-tightening and brand selloffs the soaps stayed. P&G was unbeatable there.

Well, there was that time a tiny Minnesota company blindsided the entire industry with the first liquid soap in a pump bottle: Soft Soap. The product exploded into popularity in the early 1980s, and an embarrassed P&G desperately scrambled to catch up. Naturally, they called me.

Before we continue, I should explain an important concept: the difference between “consumers” and “customers.” If you think they’re the same thing, you are unaware of the dual universe that companies like Procter & Gamble inhabit. Consumers are ordinary people who buy consumer products. Customers aren’t ordinary people; they’re mammoth grocery chains and international retailers who must be convinced of a new product’s right to replace an existing one on Aisle 6. The world’s shelf space is a ruthless battleground that shifts constantly according to customer whims, and companies like Procter & Gamble spend huge dollars trying to persuade them.

Customers are, to coin a phrase, tough customers. They were my target audience. The mission: to justify P&G’s tardy entry into the liquid soap category and to get those bottles onto store shelves. I helped to create a presentation that the public never saw—a specific message sent exclusively to customers.

P&G’s new liquid soap was named, well, for now let’s call it B-2. We all referred to it that way in conversations and written communications, because corporate espionage is a real thing, and anyone who violates rules of security can be banished from P&G forever. So B-2 it was. Whatever the final name, our goal was to present it as an attractive new bathroom miracle. How hard could that be, really, to persuade America’s grocers that a new product from Procter & Gamble—we’re talking about soap from Procter & Fricking Gamble, people—was anything but a sure-fire winner?

It was actually very hard, because Cincinnati’s sure-fire company had famously misfired. The trade was aware that P&G had missed the boat on a major new entry. Soft Soap had not only embarrassed the company in marketing but had also screwed them in strategy. The little plastic pump atop liquid soap bottles was a new technology back then, made by just two companies. Soft Soap, those bastards, bought up the entire supply. They’d spent more than the entire net worth of their little company doing it, but the result was that nobody else could enter the market for almost two years.

When Procter & Gamble was finally able to launch B-2, they decided their message to customers would be this: Our success comes from developing a product worthy of P&G’s commitment. We won’t bring it to market until we’ve made sure it will be a blockbuster. We took the time to this right! Um, OK.

That was the theme I was to incorporate into a two-minute inspirational song to be used for the B-2 presentation’s grand finale, a big audio/visual extravaganza. When I say big, I mean big. There was a time when new product presentations to customers could be as lavish as a Broadway show. Many were created by actual Broadway writers, producers, and performers and were sometimes shown in rented Broadway theaters. Look up a documentary on Netflix called Bathtubs Over Broadway, and you’ll be astonished at the extravagance that used to go into corporate shows. It’s one reason a box of Pampers costs $30. The budgets for these things have drastically declined—the shows are quite modest now—but back when I did this project some were still pretty big.

I will now reveal the brand name of B-2, Procter & Gamble’s exciting new liquid soap, and tell you its fate. The product was called “Rejoice.” I wish I could brag and tell you that I helped P&G achieve its next huge success, but no. Rejoice had disappointing results during test campaigns in Texas and California and was discontinued. Personally, I think the name was trying a little too hard, and then there was the slogan in its TV commercial: What soap should have been in the first place. It seems to be saying We’re Procter & Gamble, getting soap wrong since 1837! Eventually P&G tried again, this time using the name everyone knows: Liquid Ivory. I seriously don’t know why they didn’t start with that. Liquid Ivory did fairly well and is still around. The name Rejoice was reborn years later as a shampoo.

Here is a link to the Rejoice song I wrote and produced. I have no access to the visuals that accompanied it, unfortunately, but please note that I followed my instructions very well. I was told to make it feel vaguely like a gospel revival, with hand claps. Listening to it now, this sounds like the whitest gospel revival ever. Also note that the official “we never rush things to market” theme is mentioned throughout. It might have even worked on some people.

I must have done something right, because P&G brought me back for several more years, requiring more sport jackets. When the household cleanser Top Job introduced a new grease-cutting formula, they wanted a 1950s musical takeoff on the movie Grease. When Camay launched a new line of soaps, Michael Jackson was at his peak of fame, and they wanted music sounding like songs from Thriller. Here’s a link to both tunes. I’m proud of my years as a semi-Proctoid; they really do know their stuff.

And I do have one thing from the failed Rejoice project I am very proud of. Whenever I tell a Procter & Gamble vet about my two-minute long Rejoice song, they’re always impressed that the lyrics went through P&G’s maddening process of approval at every level—a process that invariably pummels and bruises a script until the final version is a Frankenstein monster—but emerged without a single word changed!

With Rejoice, I submit that I successfully learned the P&G way: listening to my target audience and delivering what it wants. Or perhaps it just reflects the rushed pace of the product’s doomed launch. Let’s go with my first draft on that point. 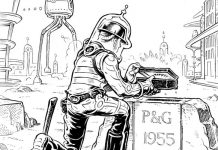