Garth Brooks has long believed in Mitch Rossell. But over the course of a nearly 10-year long career filled with its share of twists and turns, Rossell has often had a hard time believing in himself. “Every time I walk out on that stage, it’s nerve-racking,” he says. “You don’t know if they’re going to give you a chance. And if they give you a chance, will they like what they hear?” He draws in a deep breath. “I’ve been blessed so far. People seem to be really kind to me.”

But make no mistake: It isn’t a case of mere manners. Because whether Rossell wants to believe it or not, the country music artist deserves every bit of support that he’s received not only from the almighty Garth Brooks but from fans and fellow artists. He opens for Brooks on May 13 and 14 when the powerhouse show fills Paul Brown Stadium as part of Brooks’ crazy popular Stadium Tour.

The shows will be Brooks’ first time at the home of the Bengals and the only Stadium Tour dates in Ohio, Kentucky, or West Virginia. “I’m a huge football fan,” says Rossell. “It’s really cool to be going to some of these places with so much history. Just to have watched these games on TV and such, it’s surreal and pretty dang special.”

The East Tennessee native admits that he didn’t get to spend much time in Cincinnati during his younger years, as Rossell’s family favored vacations in Florida instead. But Cincinnati certainly holds a special place in his heart as of late. “When I was playing the arena shows with Garth, Cincinnati was the place where I received my very first standing ovation in an arena,” gushes Rossell, who wrote Brooks’ No. 1 smash “Ask Me How I Know.” “Plus, Cincy is just so pretty.”

Rossell currently has a brand-new single (“A Girl Does”) that he’ll be playing here. “Especially if you’ve got kids, I think you might get punched in the gut a little bit with this one,” he says. He’s the father of three little boys with wife Whitney.

And while the family joined him last weekend at the Stadium Tour’s stop at the University of Notre Dame, Rossell is on his own this weekend and eager to let the magic of Brooks seep a little deeper in his soul. “You never cease to learn something from Garth,” says Rossell, who also collaborated with country music megastar and Brooks’ wife Trisha Yearwood last year on the single “Ran into You.” “I’m always watching him not only as an entertainer but as a human. He’s just somebody you can learn a lot from. He’s the pinnacle. God put him here. You can just tell.”

So it’s no surprise that, as Rossell walks off the stage this weekend, he will continue to wonder about his own climb to country music stardom. “It’s a hard business,” he says, sighing. “It’s a tough ride and a long journey with highs and lows that are probably deeper and higher than ever before, you know? But there are a lot of good things happening for me right now, a lot of things that I feel like God’s moving within.” 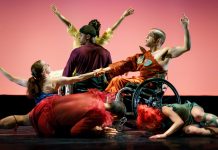