When he was 16, Clayton Belcher built a video game demo of a color-based puzzle called Splotches. It wasn’t his first experiment as a developer, and it wouldn’t be his last. “Ever since my dad came home with a coworker’s old Super Nintendo when I was a kid, I’ve always loved the idea of making my own games,” Belcher says.

The game that grew out of that demo, however, will be his first on a Nintendo system when it goes live on the Nintendo Switch early next month. 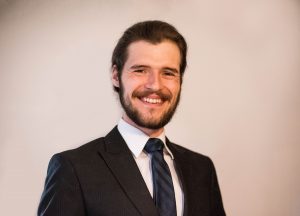 While launching on such a large platform is a breakthrough, it isn’t the game—or Belcher’s—first big break. His company, Jolly Crouton Media Ltd., boasts four games and two apps, and plays an active role in the Cincinnati gaming community. It celebrates old school gaming with groups like Cheat Codes, which is dedicated to reintroducing hidden, Easter egg content into indie games. Belcher himself is vice chair of the local International Game Developers Association (IGDA) chapter, and his early success with Splotches helped make it all possible.

Belcher developed the original demo into a full game with little more than advice and tips from a game developer forum. Its original commercial release helped him pay for college and put the game in front of thousands of people, but he wasn’t quite satisfied.

“It had rough edges, and my knowledge of the crafts involved in making games had grown,” he says. “So like a madman, I remade it.”

With help from Jacob Borison—with whom he made another game, Rodent Rush—Belcher set to work adding puzzles, improving the level maker, and introducing more intuitive mechanics. This project also boosted the two developers’ connection to the next level. Belcher and Borison were internet friends. They spoke on the phone for the first time to congratulate each other after Splotches 2.0 was released in 2018 on Steam, iPad, and iPhone.

The game features the music of Johan Hargne, and a small group of beta testers and puzzle contributors helped things come together. But even with great teammates, game development is a slow process, and this next evolution has been four years in the making.

Belcher, however, is a man who wears many hats, and he rarely does one thing at a time. He’s working on bringing two other Jolly Crouton titles to Nintendo Switch—Match Point, developed with JC employee Austin Huebner, and Franchise Wars created with Brandon Song of Tiny Warrior Games in Chicago. He’s also excited about two prototype games in the works. It’s a good time to stay busy because once again, Splotches is putting things in motion.

“Having a game on a Nintendo system is the fulfillment of a childhood dream,” Belcher says. “It’s also a huge new audience for Splotches, and one that matches the game’s target really well. It’s a big, official next step for our studio.”

It’s a success story he plans to keep local. “My plan has always been to grow Jolly Crouton Media as a studio here in Cincinnati,” he notes. “We want to build characters and universes that become familiar and fond, and alongside other developers in the area, help establish the city as a game dev city.”