Home News Laura Trujillo Is Stepping Up to Help

Editor’s Note: This story discusses suicide. If you or someone you know is struggling with thoughts of self-harm, there are resources that can help, like these crisis hotlines from NAMI Southwest Ohio and the 24-hour National Suicide Prevention Hotline: 1-800-273-8255.

I don’t know why I have my notebook out,” Laura Trujillo says when I sit down across from her. “I don’t need to take notes about myself!” The experienced journalist, formerly with The Cincinnati Enquirer, has published a new memoir, Stepping Back from the Ledge (Penguin Random House), exploring her mother’s death by suicide, but she’s more accustomed to interviewing others than being interviewed.

Trujillo’s mother jumped to her death at the Grand Canyon in 2012. Though she had struggled with depression, the suicide was a surprise to her family. Once the shock wore away, though, the tragedy seemed—at least to Trujillo—almost predictable. “Everyone knows part of someone’s story,” she says. “But we don’t put the pieces together. Everyone had some little reason to be worried about my mom. What if we’d all shared them with each other?”

These kinds of questions haunted Trujillo, who wondered if a recent disclosure to her mother—that she’d been sexually abused as a teenager—had impacted her mother’s decision to end her life. In the months that followed, Trujillo felt herself spiraling into hopelessness. “I wanted to be with [my mother] in the canyon,” she wrote later in an article for USA Today. Just before she left for the airport to fly to Arizona, her son handed her a note. “I love you,” it read, “and I know you love me.” She did not get on the plane. Today the note is framed by her bedside, and the child who wrote it is in his twenties.

Like her mother, Trujillo tended to experience depression intensely and privately. Determined to try to heal, she found a therapist and created a list of what to do when she felt low. Years later, on a discussion panel about suicide prevention, she would realize that she’d created an “action plan,” a strategy recommended for those at risk of suicide.

Part of her healing involved writing about what happened, though she calls it “the story I never wanted to tell.” Trujillo began in long Facebook posts accompanied by photographs, and the response was overwhelming. One acquaintance shared that his mother had died by suicide when he was 12. “You are giving me permission to talk about it,” he wrote. Though these words moved Trujillo and eventually gave her courage to write about the experience publicly, she still cringes when she looks back at those posts. 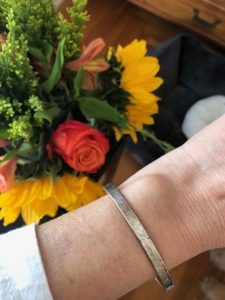 She wishes that she’d been more intentional about her language and that she’d included a mental health charity as a donation option with her mother’s obituary. She also wishes that she had talked more about hope in the USA Today story that led to her contract with Penguin Random House for Stepping Back from the Ledge. Still, she has the opportunity today, as the features editor for USA Today, to frame the topic of suicide in sensitive ways that keep the conversation moving forward. “I want to do what I can to advocate,” she says. “I won’t monitor a suicide hotline, it’s just too painful. But I can tell my story as honestly as I can.” One concrete change: The shuttle busses at the Grand Canyon’s south rim now post a suicide hotline number, which Trujillo’s son texted her a photo of during his last visit.

The canyon was an important place for her mother, a place of connection and paradoxically of joy. By researching her mother’s life and death, Trujillo has come to see her as adventurous and strong—but also that her mother had been struggling for a long time.

Trujillo often wears a bracelet engraved with the word “Love” in her mother’s handwriting. Looking at the handwriting makes Trujillo feel close to her mother, though she doesn’t want to wear it every day. In that way, the bracelet is not dissimilar from the book. “Sometimes I want to explain the book, and sometimes I don’t,” she says. And that simple sentence alludes at once to the power of both telling stories and having boundaries. In this moment and many others, Trujillo walks readers through her pain and, by honestly describing it, models self-compassion and comfort.