In the new children’s book Astra the Lonely Airplane (Belle Isle Books), the titular plane languishes in an airport hangar surrounded by bats, rats, and owls. The snacks in the galley grow mold, and the paint begins to peel. Astra was meant for adventure. Will she ever fly again? Which of the prospective buyers will prove trustworthy and true? 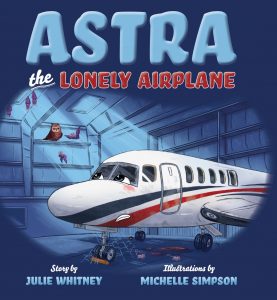 Though the story sounds like a fairy tale, Astra was actually a real private jet, and author Julie Whitney watched in dismay as the plane—flown by her corporate pilot husband—was grounded in 2020 due to the pandemic and eventually sold. Now Whitney, a local public relations professional, has transformed Astra’s story into a rhyming children’s book with many satisfying elements: memorable prose, appealing illustrations, and a plot that, though appropriately “up and down,” ends with a flight into a California sunset.

When did you decide to write about Astra?

When my husband unexpectedly lost his job as a chief corporate pilot on May 5, 2020 due to the COVID-19 pandemic, we were both in a state of shock and disbelief. We went together to the hangar to clean out his office and say goodbye to the Gulfstream (G100) jet he’d flown for 12 years. As I sat inside her beautiful interior one last time, I wept.

I asked my husband (Captain Dan in the book) what would happen if she was left sitting alone in her hangar for months on end, and he said that if her engines weren’t started up regularly she’d be in pretty bad shape. I went home feeling both angry and sad and started writing the book that night. I never intended to write a children’s book, but it came upon me unexpectedly and was very therapeutic. You might say I turned lemons into lemonade.

Can you talk a little bit about how the pandemic impacted the aviation industry?

The COVID-19 pandemic had a profound effect on the aviation industry, with millions of employees losing their jobs worldwide. Commercial passenger traffic in April 2020 was an estimated 96 percent lower than in April 2019, and the numbers remained down approximately 60% over 2019.

The opening pages present Astra in her prime, offering children a glimpse into her world. How did you decide what details to include?

Most children (or adults) have not had the opportunity to fly in a corporate jet. I wanted them to sense how luxurious she is inside, with her own kitchen, bathroom, television, and comfy leather seats. I also wanted them to sense the camaraderie between her and her constant companion, Captain Dan.

After Astra is grounded, the suspense rises as prospective buyers enter the scene. I felt like I was kind of seeing a “Three Bears” type scenario, as Astra and Captain Dan tried to figure out who was the “just right” buyer! Did you also see this part of the story as being like a fairy tale?

Very much so. If I had to describe the book as a fairy tale, I’d see it as fitting between Goldilocks and The Three Bears and The Little Engine That Could. But it has a bit more depth with key messages, such as overcoming life’s challenges, dealing with difficult people, adapting to new circumstances, and having hope. It’s also more sophisticated with a bit of math and geography and a glossary filled with facts and terminology about airplanes and flying.

I took hundreds of photos of the real Astra and Captain Dan the day of our video shoot, knowing that it would help an illustrator capture them accurately. When we got to the illustration part of the process, my publisher showed me a portfolio of artists they’d used in the past. I narrowed it down to three, and Michelle Simpson nailed the illustration of both Astra and Captain Dan. I got teary-eyed when I saw her drawings, and I knew in my heart she was the one.

I provided art direction every step of the way, since I wanted to see a fuel tank leak and bats, owls, and mice in her hangar and cobwebs and dust, for example, in the scene where Astra is left alone with an uncertain fate. That actually ended up being the cover.

How are children responding to the story?

Children from 3 to 10 seem to be loving the story. The younger children are memorizing its rhyming verse and even learning to identify the 50 states, while the older children think it’s a great read. They’re especially loving the fun facts about Astra and the real video of Captain Dan. I’ve gotten letters and photos from children and teachers who pre-ordered the book, and that’s warming my heart. One of my favorite pieces of feedback was when a child said they loved how Astra “bonked” all the bad people who were trying to buy her.

One of my daughter’s favorite parts of your project came after the story was complete, when we clicked on the QR code and were able to watch a video tour of the real Astra. Can you share a bit about the video?

It was a hot September day in Astra’s hangar. Captain Dan ad-libbed the entire thing and did a very nice job. Many thanks to Glenn Hartong for shooting it. The website also has more fun facts and information about Captain Dan and Astra, and there are Astra coloring pages and activity sheets that parents and teachers can download as a supplement.

Julie Whitney will be reading and signing Astra the Lonely Airplane, showing the video, and answering questions at the book’s official launch party March 5 at 11 a.m. at Joseph-Beth Booksellers in Rookwood.