When you think about the smoothest, coolest brass sections of funk and soul bands from the 1970s and ’80s, Ohio shows up front and center. Bands like Ohio Players, Slave, and Lakeside all came out of Dayton while Bootsy’s Rubber Band grew up right here in the Queen City. Trumpeter Mike Wade is continuing that tradition with the debut release of the eponymously titled Mike Wade & the Nasty NATI Brass Band.

Formed in 2012, the band—comprised of a rotating roster of trumpet players, trombonists, saxophonists, drummers, a tuba player, and a percussionist—prides itself on being a part of a long tradition of bands with outstanding horn sections. Nasty NATI combines a second line New Orleans brass band sound with Midwest funk and D.C. go-go for some lively, infectious grooves.

“It’s not your traditional brass band, but it has a brass band sound,” Wade says. “It was formed with the intent of brass band instrumentation and the funk sound.”

For the band’s first release, Wade wrote three of the 13 tracks, including “Bengals’ Anthem” and “Marauder Groove,” an ode to his days at his alma mater, Central State University. Other selections include “Where’s the Tip?,” a fun track with a Chuck Brown go-go vibe about the lost art of tipping, and Dayton-based trombonist Gary Scott-Jones’s “In Memory of Tamir Rice,” on which local rapper Maurice “Rdot Edot” Suttles recites a heart-wrenching poem about the slain child.

Wade resigned from his teaching job at Withrow High School this summer, after spending 20-plus years as the school’s music teacher and band director, giving him more time to dedicate to his bands.

“I juggled for years and years,” he says of his time teaching during the day and playing trumpet in jazz bands in the evenings and on the weekends. “I helped get a lot of kids to college and all of that was a wonderful experience. But this is freedom and I’m going to enjoy for as long as I can.”

Wade plays straight ahead jazz with the Mike Wade Quartet and offers up smooth jazz with his group Mike Wade & the Mighty Groovers. For the last five years, he’s been a traveling musician playing in the backing band of the well-known funk/R&B group Cameo. (In July, he played trumpet during the group’s “Funk Corona” charity pay-per-view extravaganza, which featured Mary Jane Girls, Ready for the World, and Morris Day and the Time.)

In a way, Mike Wade & the Nasty NATI Brass Band is an amalgamation of Wade’s musical experiences throughout the years—the culmination of more than 40 years on music scenes that allows him and whomever he’s working with to become chameleons of sound.

“Music brings people together,” he says. “We love all types of music and we try to present as many as possible.”

The release is available at Everybody’s Records and Shake It Records locally and on   mikewademusic.net. 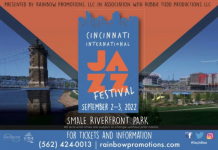