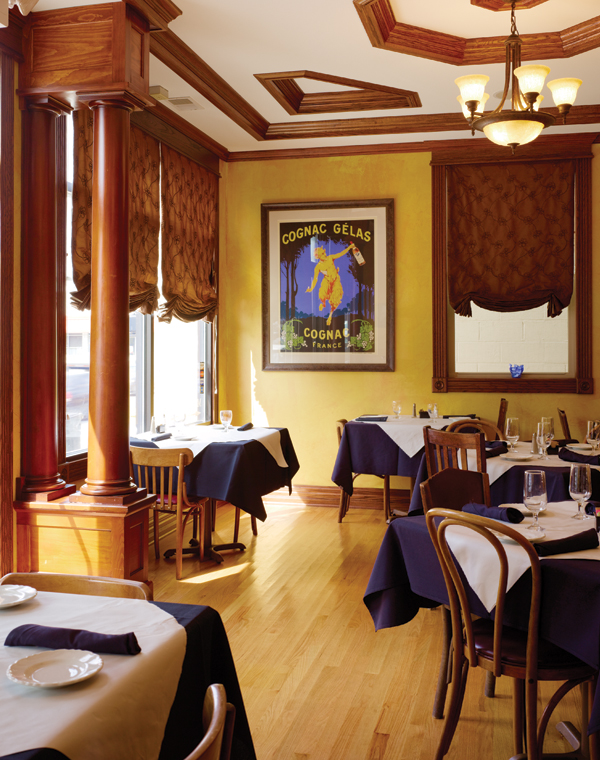 Bellevue Violins
Patrick Higgins has been hand-building violins for five years in his Bellevue shop, but he’s been perfecting the craft for much longer. After studying viola performance at The Ohio State University, Higgins apprenticed as a luthier (a maker of string instruments), opening his own shop in 2008. He now spends between 150 and 200 hours at a time handcrafting his instruments, which are used by musicians in orchestras in Cincinnati and beyond, as well as by many students in the College-Conservatory of Music at the University of Cincinnati. 705 Fairfield Ave., (859) 652-3556, bellevueviolins.com

Doggynauts
Everything you need to know about this Bellevue shop can be summed up in two words: urban mushing. As a parent to five Siberian Huskies, shop owner Douglas Gilb was looking for a way to manage his brood’s incredible amounts of energy. He discovered urban mushing, which uses a wheeled vehicle instead of a sled. Unable to find the correct leads, he then began to sew them himself and started selling the sets online in 2005. Last October, Gilb opened his shop, stocked with his handmade leashes and everything else for active dogs and their owners. 708 Fairfield Ave., (859) 291-3047, doggynauts.com

Weller Haus Bed-and-Breakfast
This charming B-and-B has continued to expand since it first opened in 1990. Original owners Mary and Vernon Weller raised a family in the Victorian-era home and then transformed it into a small inn once their children were grown. Current owner Leanne Saylor purchased Weller Haus in 2004 and added an event center. The property lies just off the main Bellevue drag, and its full-course breakfast (served in the dining room or en suite), thoughtfully appointed rooms, and lovely landscaped garden make for a nice quiet night away. 319 Poplar St., (859) 391-8315, wellerhaus.com

Bellevue Bistro
When chef and owner Jeffrey Meiners purchased this 30-seat bistro in 2007, he decided to bring breakfast food to the forefront—and his instinct was spot on. Due to popular demand, he recently started serving the most important meal of the day all day, and specializes in a creative menu of egg Benedicts, which are brought to the table in straight-from-the-oven skillets. Choose from unusual combinations such as pork loin with goat cheese or blackened salmon with sweet chili sauce—all served with a fried egg and house-made biscuits. 313 Fairfield Ave., (859) 581-5600, enjoybellevuebistro.com

Schneider’s Sweet Shop
Opened by Robert Schneider Jr., and now run by his son Jack, this long-standing Bellevue institution has been mixing up candies, ice cream, and fudge and other specialty treats in the same location since 1939 (using the same recipes and machines, too). Schneider’s is famous for their opera creams, a sweet cream filling covered in chocolate. Legend has it that the candies were brought to Cincinnati from France and handed to patrons of Music Hall before opera performances. We’ll bite. 420 Fairfield Ave., (859) 431-3545, schneiderscandies.com

Thyme Square
Donna and Dan White opened this small tea and spice shop back in 2010, and even though they carry 140 types of exotic spices from around the world and 70 kinds of black, green, white, and herbal tea, they didn’t stop there. Thyme Square now offers a little bit of everything, including teapots and serving ware,  vinegars, soup and sauce blends, customized spice blends, old-timey herbal remedies (Dandelion root! Catnip!), and most recently, house-smoked pork barbecue sandwiches. Or simply stop by their beverage bar for a Mexican hot chocolate, cream soda, or root beer float, or for a takeaway version of any loose tea in their shop. 421 Fairfield Ave., (859) 261-4650

Virgils Café
Virgils took Bellevue by storm when it opened early in 2009, turning out seasonal weekly specials featuring produce harvested from chef-owner Matthew Buschle’s very own backyard garden. But beyond the fashionable farm-to-table profile, the Virgils menu is centered around food made from scratch. Like the Andouille Carbonara: housemade sausage tossed with spaghetti, egg, pork belly, and pecorino. Don’t shy away from trying the fried frog legs with jalapeño hushpuppies; they blow chicken out of the water. 710 Fairfield Ave., (859) 491-3287, virgilscafe.com
Originally published in the June 2013 issue