Last week, I left you with this tantalizing paragraph: The good news? There is a very clear and eminently achievable path to the playoffs for the Reds in 2020. More on that next week.

Let’s begin by acknowledging that the Reds are in a better place than they’ve been in a number of years. Sure, it was a sixth straight losing campaign, but at least they didn’t lose 90 games again, right? Seriously, the Reds competed into August, and if you look at their run differential they were probably a bit better than the final record will show. Still, it’s been a difficult season for Cincinnati baseball fans.

Given the progress made by the franchise over the last 12 months, however, it’s clear that the club has positioned itself to make a real run at fielding a competitive franchise in 2020. And there’s even reason to believe the Reds intend to do precisely that. Case in point: At the trade deadline, the Reds traded away their top prospect as part of a deal for pitcher Trevor Bauer. Since Bauer is signed for just one more season, there’s no other way to evaluate that trade than to concede the Reds are committed to improving the product on the field.

It’s time for that commitment to manifest itself in other ways. And it’s going to take drastic action if Cincinnati hopes to improve enough to be a playoff contender one year from now. More specifically, the Reds need to be exceptionally bold in their attempts to upgrade the offense.

In 2019, Cincinnati’s offense ranked 13th (of 15 teams) in the National League by position player WAR. If the Reds had just an average offense this year, they almost certainly would have been a playoff team. So let’s use that as a working hypothesis: The Reds need to improve the lineup enough to make them an average offense. Using the numbers at the link above, that means Cincinnati needs to add 10 or 11 wins above replacement some way somehow just to get in the neighborhood of an average offense.

Listen, this is certainly a crude way to talk about improvement, and we can argue over precisely how many WAR the Reds need to add. The point is that the offense is nowhere near good enough, and the Reds have to make big moves to fix it.

To be fair, I don’t think it’s unreasonable to assume that some of the improvement will come from current Reds. For example, I’d bet the ranch on Nick Senzel having a breakout year in 2020 (presuming health, which is a big presumption, I know). You don’t have to squint very hard to see other players—a full season of Aristides Aquino or Jesse Winker, for example—improving over their 2019 performance. But Cincinnati management would be committing malpractice by going into the 2020 season with approximately this same group of players, hoping that enough of them improve to fix the offense. Remember: Hope is not a strategy.

No, it’s abundantly clear that the Reds have to get better all across the diamond. Let’s look at where this year’s club ranked position by position among the 15 National League teams (with six games remaining in the season): 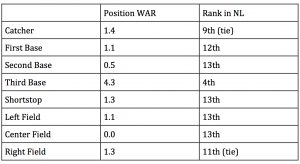 It’s pretty stark when you look at it this way. Right now, the only positions on the field that are absolutely filled for next year are 1B (Joey Votto) and 3B (Eugenio Suarez). Senzel will also be in the lineup somewhere—presumably center field—but the Reds should be looking to upgrade at every single other position.

Again, some of that improvement should come from internal options; in addition to those mentioned earlier, I fully expect Votto to improve upon his season-long totals. Since May 24 (91 games), he’s hit .296/.387/.464. I think he’ll be fine, as I’ve said before. But let me repeat: Hope is not a strategy. It’s absolutely imperative that the Reds be extremely bold in attempting to upgrade the roster from outside the organization.

Which means it’s time for Reds ownership to spend money as if they were actually serious about being a competitive MLB franchise. Cincinnati opened the wallet a bit last year, but the Reds’ payroll was still below average. In fact, it was only the 10th-highest payroll among the 15 National League clubs (17th in all of baseball). If that doesn’t change over the next six months, you have my permission to ignore the Reds indefinitely. This is their chance to prove to us fans that they’re willing to compete on the same playing field as the best teams in the league.

Yes, it’s easy for me to spend someone else’s money, and I enjoy doing it! But spare me the tired “small market” arguments. I’ve used this passage before, but I believe it 100 percent:

There’s certainly a relationship, which might lend credence to the idea that measures of market size are picking up on something real about the ability to spend of each team. But here are the biggest positive outliers over that period, teams that have spent more than their market size would suggest: the Cardinals, who have a .555 winning percentage since 2005, third-highest in MLB; the Tigers, who have a .525 winning percentage, eighth-highest; and the Red Sox, who have a .539 winning percentage, fourth-highest. In other words, the simplest way for teams to break out of their market size limits is the obvious one: win a lot. Winning teams have fans, in their area and around the world, and those fans give that team money which that team can then spend. Being a small-market team is not a badge of inferiority that certain teams have to carry throughout life like a scarlet letter; it’s the product of choices, usually made by the owner, to scrimp and save, to not sign free agents, and to not try as hard as possible to win. That’s what makes a small-market team, not where they happen to play.

If the Reds truly don’t have enough money to compete with other teams in the league, then they need to let us know in so many words. Because that will be our cue to stop wasting our time following a team that can’t or won’t do what it takes. Bob Castellini promised us a winner. It’s time for the ownership group to put their money where their mouth is.

So what does that mean in practice? Well, I have some thoughts on that too, as you might suspect. Here’s my rock solid Four Point Plan:

The Reds must sign at least one (and ideally two) impact free agent bats.
My dream is Anthony Rendon, the Washington third baseman who is having yet another outstanding season. Sure, he plays the same position as Suarez, but both guys have experience at other infield positions. If you have those guys, you figure out how to make it work.

Other options include catcher Yasmani Grandal, shortstop Didi Gregorius, left fielder Marcell Ozuna, and right fielder Nick Castellanos. All would represent serious upgrades at their respective positions. Signing one of them would help, but two would immediately put the Reds in the playoff hunt. And sure, it’s easy to just say “go sign those guys” as if other teams aren’t going to be trying to sign them as well. It’s ultimately the player’s decision. But Cincinnati management’s job should be to ensure that no targeted free agent says “no” because of money.

If the Reds don’t sign at least one of these players, I have difficulty envisioning how they can fix the offense enough to compete for a playoff spot next year.

Sign Alex Wood and trade Trevor Bauer for a bat.
Kudos to my guy Jason Linden for this idea. Wood may have no interest in returning, but I still think he’s a great candidate for a bounce-back season, as I said a couple of months ago. Bringing him back would provide sufficient rotation depth to permit the Reds to deal Bauer, who presumably has some value on the market thanks to his superb 2018 campaign.

If the Reds can package Bauer with other assets as a means to acquire another hitter (preferably a young, controllable one), it makes way too much sense not to pull the trigger. Bauer will be playing elsewhere in 2021 anyway. And, for what it’s worth, I think there’s a better-than-even chance that Wood will be a better pitcher than Bauer next year.

Upgrade the middle infield and the outfield.
Presumably, this will be accomplished through steps one and two above, but I felt it needed to be highlighted. If the Reds go into the 2020 season with a middle infield combination of Freddy Galvis and Jose Iglesias, well, I’m here to tell you that you should stop watching immediately, because it’s going to be ugly again. Both of those players have their merits—Iglesias is particularly good with the glove, and Galvis has some pop in his bat—but neither is a good option for a legitimate playoff team. Out of 25 qualified big league shortstops, Galvis and Iglesias rate in the bottom five in pretty much every single category. See for yourself.

The Reds can afford one unproductive player in their middle infield, but as things currently stand the offense is just far too weak to accept two of those. Hey, I’ll take Iglesias or Galvis as my starting shortstop next year if Rendon is playing 2B next to him. If it’s Josh VanMeter playing second base, I’m not going to stop watching the team, but VanMeter would have to develop into a significantly above-average hitter for that to work. I do think he has a chance to be pretty good, but have I mentioned that hope is not a strategy?

On a smaller scale, the Reds simply can’t go into 2020 with a Jesse Winker/Phil Ervin platoon in left and Aquino in right, flanking Senzel in center. I like the Winker/Ervin combo quite a bit actually, and I’m interested to see what Aquino can do over a full season, but going into 2020 with these same outfielders would be a huge gamble. Unless, of course, the Reds have signed Rendon and traded for Francisco Lindor to man the middle infield. Dare to dream.

Win games.
Connect on the first three steps, and the only thing left will be to chill the bubbly in the clubhouse, because that team is going to the playoffs, baby!

There are certainly other paths the Reds could take to fielding a serious contender next season, and I’m eager to see what direction they take. As I’ve noted before, I’m pretty confident in the abilities of Dick Williams, Nick Krall, and company—as long as their hands aren’t tied by ownership—and I fully expect this to be the most exciting Reds off-season since Ken Griffey Jr. came home back in 2000. (Yes, two decades ago.)

But let’s be clear: The rebuild must end now. It’s time for the Cincinnati Reds to go all-in. This aggrieved fan base should settle for nothing less. I know I won’t.

Chad Dotson authors Reds coverage at Cincinnati Magazine and hosts a long-running Reds podcast, Redleg Nation Radio. He wrote about the 1970s Reds as part of the magazine’s “10 Events That Shaped Cincinnati” package. His first book, The Big 50: The Men and Moments That Made the Cincinnati Reds, is available in bookstores and online.