Home News Saving Zoo Gorillas One Echocardiogram At A Time 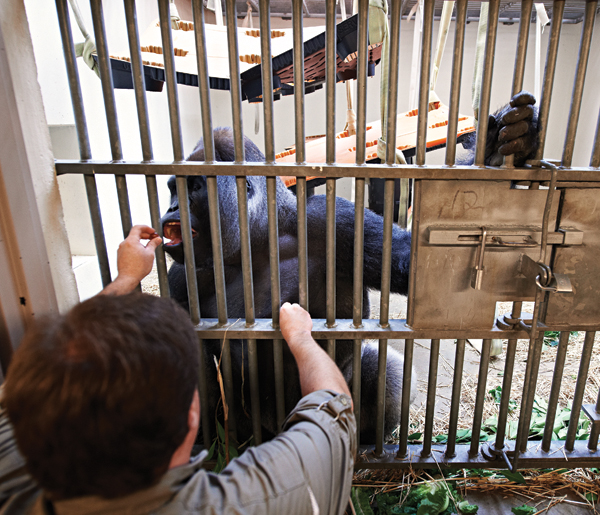 Mature male gorillas, known as silverbacks, have Type-A personalities. “They’re hard-wired to be uptight,” says Ron Evans, team leader for primates at the Cincinnati Zoo. “Gorillas live in harems with one male for every five or so females. Those females are looking for someone tough who can protect them and their babies.”

That personality isn’t so good for the gorilla’s long-term health. As they age, many develop a problem often seen in high-strung humans: heart disease. Two years ago, Evans and other primate specialists around the country began training their gorillas to stand still against a cage so that a vet could place an ultrasound wand against the apes’ chests and get pictures of their hearts.

Then Evans thought, Since gorillas share 98 percent of human DNA, why not use an echocardiogram machine made for humans? He contacted renowned cardiologist Wojciech Mazur of Christ Hospital who convinced the Japanese company Toshiba to loan out state-of the-art ultrasound machines. “We collected some of the most amazing gorilla heart images ever collected anywhere,” Evans says. To date, Evans has obtained ECHOs on eight of the zoo’s gorillas and has moved on to test bonobos and orangutans. Eventually, he and other zookeepers around the country hope to compile a database of gorilla heart ECHOs that will help veterinarians diagnose heart disease in zoo gorillas, and keep them alive longer, which helps the species stick around. “We don’t take gorillas from the wild anymore,” Evans said. “So it’s imperative that we manage the ones we have the best that we can.”