The Rookie Cookie Fry Box, a new concession item at Great American Ball Park (GABP), is one of those dishes that tastes good against all odds. The massive pile of French fries, Golden Grahams, marshmallows, and crumbled Oreos drizzled with chocolate and caramel sauce breaks just about every culinary law, but it works.

Gary Davis came up with the idea for the Rookie Cookie Fry Box. As the executive chef for the Cincinnati Reds, a position he has held since 2018, he is responsible for most of the fan favorites at the baseball stadium. Truth be told, the magnitude of his responsibilities is mind-boggling. He runs the ballpark’s six premium dining areas (the Diamond Club, the Scouts’ Club, the Boone County Bourbon Press Club, Bally’s, The Handlebar, and the Machine Room), which employ nearly 50 cooks and can feed up to 4,000 people on a given game day. He’s also responsible for getting food out to the dozens of suites and concession stands that line the grounds. This means rolling out up to 17,000 hot dogs per day. And let’s not even try to count how many peanuts and Cracker Jacks.

If you’ve ever cut into a cooked-to-order steak at the Diamond Club, loaded up on California rolls at The Handlebar, or had the privilege of dining in a well-stocked private suite while taking in the ballgame, you’ve tasted Davis’s handiwork. The 37-year-old has been training for this job for most of his life. “I’ve always loved to cook,” he tells me as we grab a seat in the currently empty Handlebar a few hours before a game.

The Bond Hill native made his first foray into the food service industry at the beloved Grand Finale. After that, it was on to culinary school at Johnson & Wales University in Rhode Island.

He found cooking jobs hard to come by after graduation and took a job as a stewarding manager at the Hilton Cincinnati Netherland Plaza hotel, eventually working his way up to banquet chef at Orchids under Todd Kelly, whom he describes as an important mentor.

In 2013, Kelly recommended Davis for the banquet chef position at the newly opened Horseshoe (now Hard Rock) Casino. He took the job, and eventually became the casino’s executive chef. That high-stakes job prepared him for his current role at GABP. As anyone who has been to a casino and seen the frenetic, late-night world firsthand can guess, it got to be pretty daunting.

Not to say that his current gig is a walk in the ballpark. When I visited in July, the Reds were in the middle of their longest home stand in years. For Davis, this means two weeks of 10- to 12-hour days and around 30,000 steps per day. And no, he and his team don’t get an extended break when the Reds go out of town.

Davis credits his team with helping him get the job done. As the executive chef, he is personally responsible for most of the hires. The job being seasonal, he relies heavily on students, including foreign exchange students from as far away as Mongolia. For many of his employees, it’s a welcome first job. A ballpark kitchen, hectic as it can get, is a reprieve for some. “Sometimes coming here gets my employees out of a home lifestyle that might not be so great,” Davis says. “I want people to have fun here.”

If my three-plus hour walkthrough was any indication, he seems to be achieving that goal. He greeted nearly all of the kitchen staff we ran into by name, often asking how their days were going, making rapid-fire banter or following up on previous conversations mid-stride. He even introduced me to his father, Gary Davis Sr., who was readying hundreds of hot dogs to be sent out to concession stands.

Aside from managing scores of employees, Davis also has a hand in all the dishes that come out of these kitchens, working with Executive Sous Chef Chris Stephens (whom he worked with at Orchids) and Diamond Club Chef Chris Metz to draw up menus. The menus at most of the premium restaurants rotate with each new Reds series, with menus at the exclusive Boone County Bourbon Press Club and the Diamond Club rotating daily. The goal is for fans to get a different menu on repeat visits.

And what a menu it is. Highlights included the tender, meaty cod with broccolini; spicy-yet-sweet Mexican street corn; a Big Mac-inspired slider; and those far-fetched but somehow craveable dessert fries. 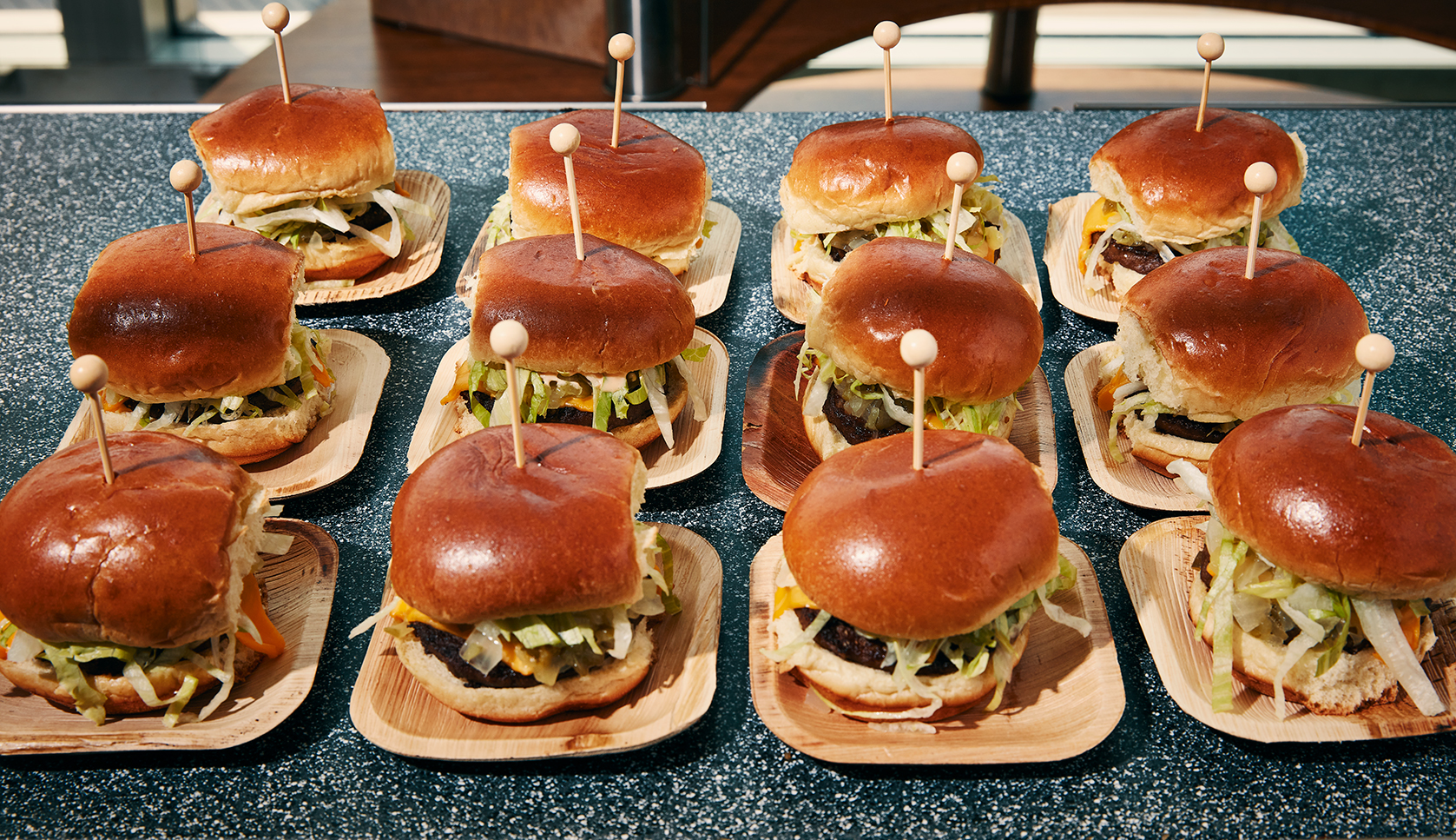 Davis’s great balancing act is to serve unique—sometimes experimental—food that still has broad appeal. “If you look up Major League Baseball food, there’s always those unique items, food that people come to the ballpark to have,” he says.

His current experiment: red ice cream. “The blue ice cream at Kings Island has become so iconic,” he says. “We wanted to do something equally iconic with red ice cream.” You might see it roll out in 2023, if he can find a reliable source of red dye.

And with the Reds’ season concluded, Davis continues to push full steam ahead, planning next season’s menu and even taking off on a few road trips of his own. As a regional chef for Delaware North (the company that runs the culinary operations at Great American Ball Park as well as several other stadiums around the country), he lends a hand at other venues in the offseason. Traveling sports fans might see him powerwalking the halls of some giant stadium in Columbus or Baltimore, rounding the kitchens like so many bases.