C. Jacqueline Wood couldn’t predict she’d be the owner of College Hill’s new collection of Japanese comic books, Manga Manga. In 2019, her nonprofit The Mini Microcinema in OTR was too busy showcasing the work of local filmmakers, and she was too busy teaching film courses at the University of Cincinnati. Oh, and working on her own films.

But like a lot of people, she adapted during the pandemic. She became hooked on the illustrations in Japanese comic books called manga, and watching their storyboards translated into animated films, or anime. 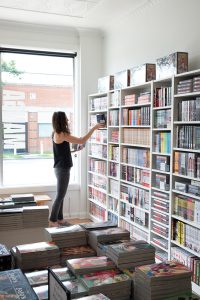 And while there’s a good chance you’ve heard about this art form before, stepping into Manga Manga makes you realize there’s still a lot more to learn. The storefront’s curation of comics covers a wide breadth of genres, including just about every popular story that’s been told in the format, from staple series like Pokémon, Sailor Moon, and Dragon Ball, to newer hits like Demon Slayer, Jujutsu Kaisen, and Witch Hat Atelier. But no worries if you’re new—Wood offers accessible instructions, like reading the panels from right to left. “Like any medium, it takes a spark to get into it,” she says. “This is a curated experience to help someone find what they’re looking for, and then something new.”

Her storefront speaks for itself. The walls are packed with manga sectioned for kids, young adults, and mature audiences, with a variety of niche pieces on subjects from living with ADHD (My Brain Is Different) and having your first period (Little Miss P), to colorful Studio Ghibli picture books and a plethora of LGBTQ+ romance stories. Look around hard enough and you’ll even find manga theory textbooks, the sinister works of horror artist Junji Ito, and a deliciously detailed cookbook.

What’s been most surprising to Wood has been the community’s response. During her opening week in early April, she sold a third of her inventory. “Since then, I’ve been an insane person,” Wood jokes. “And it was only through Instagram and word of mouth. That’s an indication of what people want in this city.” She’s working directly with her customers, creating a list of manga to special order, and carrying all the relevant and new titles that her customers want for Manga Tuesdays, the industry standard for new releases. They’ve definitely responded. “There was a group of fans that came in the first day dressed as maids,” Wood says. “I’ve tried to take the barriers down. You will never be judged in this space.”