A couple of weeks ago, I wrote about the players on Cincinnati’s roster who still have much to play for in the waning days of another brutal season for the ol’ Redlegs. You may be surprised to learn that, as we speak, many players across baseball are actually in the middle of exciting pennant races, with spots on the post-season on the line. Crazy, right?

Sure, the current version of the Reds is tough to watch, but fortunately there are plenty of old friends in new uniforms who have a shot at the playoff glory that eluded them in Cincinnati. With that in mind, let’s check in on the Reds who departed during Castellini’s Great Cincinnati Fire Sale of 2022. And there’s only place to begin: Seattle.

In recent weeks, I’ve found my personal allegiances drifting northwest. The Mariners are in the thick of the American League Wild Card race, even with a lineup that occasionally looks like “Cincinnati Reds West.” It’s a fun team to watch, even from afar; players and long-suffering Seattle fans all just seem like they’re having a blast every single day. As it turns out, I’m a sucker for evidence that baseball can actually be fun.

In recent weeks, the source of that joy, more often than not, has been Eugenio Suarez. An All-Star with Cincinnati in 2018, Geno has rebounded in a big way from his struggles of a season ago. You will recall that Suarez was basically a throw-in when outfielder Jesse Winker was traded to Seattle in the spring. Instead, Suarez has been a star.

Geno’s 4.6 wins above replacement (WAR) already tops any single-season total during his Reds career. He’s hitting .235/.335/.470 with 31 home runs and 84 runs batted in, and in the last couple of months he’s really turned on the afterburners. Since August 1, only Aaron Judge has hit more homers than Suarez’s 15. In a recent eight-game homestand, he hit six longballs, including a walkoff blast against the White Sox that was his second homer of the night.

Alas, Suarez was recently placed on the 10-day injured list Saturday with a small fracture in the tip of his right index finger. Hopefully that’s just a blip on the radar and he’ll be back soon. Because watching Mariners fans and their social media accounts enjoying Geno’s good vibes has been my favorite thing about the 2022 season.

Of course, Suarez isn’t the only ex-Red making his mark in Seattle. Since being dealt at the trade deadline, pitcher Luis Castillo has been his customary dazzling self: a 3-1 record with a 2.37 ERA in eight starts. And Taylor Trammell, a former Cincinnati prospect, has seen action in 40 games. (Current Red Stuart Fairchild picked up three at-bats with the Mariners in May, if you were wondering.)

And then there’s Winker, an All-Star just a season ago who was expected to be featured prominently in Seattle’s lineup. Things have not gone well, to say the least. Winker has posted a slash line of .218/.338/.342 and lately has been out of the lineup against lefties. It has been far and away his worst year at the big league level; at age 28, Winker is a good bet to figure things out and rebound. Seattle hopes that will happen sometime before the calendar turns to October.

In a similar position vis-à-vis the playoffs are the Philadelphia Phillies, whose lineup features another former Reds All-Star, Nick Castellanos. He, of course, signed a free agent contract after the Reds refused even to offer him a deal (a slight for which he torched Reds ownership on the way out the door).

Like Winker, however, Castellanos has failed to match the numbers of his brilliant 2021 campaign, hitting just .265/.305/.397 with 13 homers and 61 RBI. Like Suarez, he’s currently on the injured list. With the Phils clinging to the final National League Wild Card spot, they’ll hope he can return and help them win a post-season series for the first time since topping the Reds in the 2010 Division playoffs.

Further back in the AL Wild Card race are the Minnesota Twins. At 73-74, they trail Seattle by 8.5 games and are destined to miss out on the playoff fun. The Twinkies feature fully 40 percent of last year’s Reds rotation, Sonny Gray and Tyler Mahle. Gray has been mostly great all season long, posting a record of 8-5 with a 3.08 ERA. Unfortunately, he’s had trouble staying on the field, landing on the IL in April and again in June.

Injuries have been the story for Mahle as well. Since the mid-season trade to Minnesota, he’s made just four starts (posting a 4.41 ERA in 16.1 innings). He was forced to leave each of his last two starts early with shoulder fatigue and inflammation, and it appears Mahle’s season is over.

For what it’s worth, the Twins also have another familiar face on their roster: Billy Hamilton. The former Reds speedster signed a minor league deal with the club last month after spending time with the Miami Marlins earlier this year. Hamilton has played in 10 September games, mostly as a defensive replacement; he has batted five times and is still waiting for his first hit as a Twin, a distinction he shares with Gray and Mahle.

The other castoffs from last year’s Reds club are having a similar experience as the players who stayed here in Cincinnati—by which I mean lots and lots of losing. Last year’s no-hit hero Wade Miley has been brilliant for the Cubs, posting a 2.89 ERA. That’s not nearly as impressive as it seems; thanks to a recurring shoulder injury, he’s made just six starts. Former Reds reliever Amir Garrett is 3-1 with a 4.95 ERA in 40 innings for Kansas City sandwiched around yet another league suspension.

Finally, let’s check in on Tucker Barnhart, who earned two Gold Gloves along with tons of fans during his eight seasons here in Cincinnati. His defense behind the plate continues to be good, but he’s suffering through the worst offensive season of his career (.209/.274/.256). As the season has progressed, Barnhart has found himself serving as the backup catcher in Detroit, and given his skill with the glove and with handling pitchers that seems like a role he’ll be able to fill for the foreseeable future.

As the season winds down, I find myself rooting for all these former Reds to find success, but none moreso than the Suarez/Winker/Castillo triumvirate in Seattle. Wouldn’t it be nice to see our old friends having fun and winning games under the bright lights of October baseball? And Reds fans should identify closely with the Mariners fan base, die-hard supporters of a franchise that’s had very little success, making the playoffs only four times in history. Perhaps we don’t have it quite so bad in Cincinnati.

So for the next few weeks, I have an answer to Phil Castellini’s question. Where ya gonna go? Join me in the Pacific Northwest. Go Mariners! 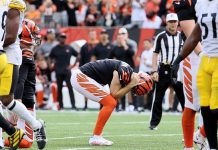 The Bengals Snatch Defeat from the Jaws of Victory