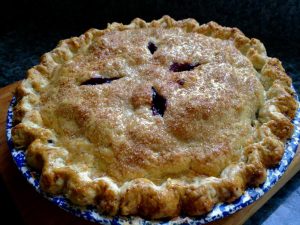 My fondness for this season is tied to a favorite childhood book, Blueberries for Sal, a sweet little story about the unexpected adventure that occurs when Little Sal and Little Bear mistakenly trade mothers while out picking blueberries. As a child, I completely empathized with being so absorbed in a task that you could wander off with the wrong mother.

But more so, Blueberries for Sal was a ritual that began June days of berry picking with my grandmother Millie.  As I ate my oatmeal, Millie read the story. I could hear the “ku-plink ku-plunk” of Sal’s berries as they hit the bottom of her metal pail; I could feel the warm berry juice dribble down her chin. After breakfast we climbed into my grandmother’s two-toned Chevy and drove to a nearby farm. We filled our buckets with blueberries and blackberries. We shoved handfuls of warm fruit in our mouths and let the juices run.

From the afternoon into the evening, we folded berries into lemon pound cake, we pushed them through the Foley mill with our purple-stained fingers to add to custard for ice cream, or into jars for jam. But my favorite task – then and still – involved mounding berries between crusts for pie.

My grandmother always claimed that knowing how to bake a pie was the ticket to heaven. When I asked her what would happen to granddad, she replied that he’d be there too – for as long as you loved pie and ate enough of it, you were allowed to wait in line behind the bakers.

So pie bakers, grab your rolling pins…the recipe below is guaranteed entry.
The rest of you, grab a fork and get in line.

Prepare the pie crust. Roll out and line a 9” pie pan, brush bottom of crust with egg white (this helps to seal the crust from excessive juice). Chill for 30 minutes while you prepare the filling. Pre-heat the oven to 400 degrees (place a baking sheet on the lowest rack to catch drips). Combine all ingredients except for butter and egg in a bowl. Mix. Pour filling into crust, mounding in the middle. Dot with butter. Roll out dough for top crust. Seal edges and crimp. Beat egg yolk with a teaspoon of cream or milk. Brush top of crust and sprinkle with sugar. Cut four slits to allow steam to escape. Bake 15 – 20 minutes at 400; reduce heat to 350 degrees and bake 40 more or until fruit is bubbling and crust is brown.
Best served slightly warm or at room temperature, but if you’ve yet to know the joy of cold leftover pie for breakfast, you’ve got some livin’ to do.

THE CRUST OF THE MATTER

A bucket of beautiful blueberries may be the pretext for making pie, but it is the crust that makes it memorable. These are my tried-and-true tips for flaketastic crust, every time.

Chill The Fat
Warm fat will be absorbed by the flour too quickly, rendering the crust tough. Instead of one mass, think of pie dough as hundreds of flour-coated particles. If the kitchen is particularly warm, chill the flour for 10 minutes in the freezer.

Use All-Purpose Or Pastry Flour
Bread flour contains too much gluten for a tender crust, and cake flour is too soft to support it.

Handle With Care
Pockets of fat = flaky crust. If using a food processor, pulse quickly for a few seconds total. By hand, use two knives or a pastry cutter to create those coveted particles. When most of them are pea-sized, add the ice water until the dough just comes together.

Rest The Dough
Shrinking and / or soggy crusts are often the result of dough that’s not given a conditioning period. Once the dough is gathered into a ball, rest it in the refrigerator for a minimum of 30 minutes before rolling it out.

Roll Quickly And Efficiently
It can’t be said enough: Short on handling means long on flakes.

Rest It Again
For an easily removable crust, lightly grease the pie pan. After the dough has been rolled and fitted into the pie pan, let it rest in the refrigerator while you prepare the filling.

No Soggy Bottoms
To keep the fruit juices from saturating the crust, brush an egg white over the bottom and let it set for several minutes before adding the filling. Setting the pie on a baking sheet also helps prevent soggy bottoms.