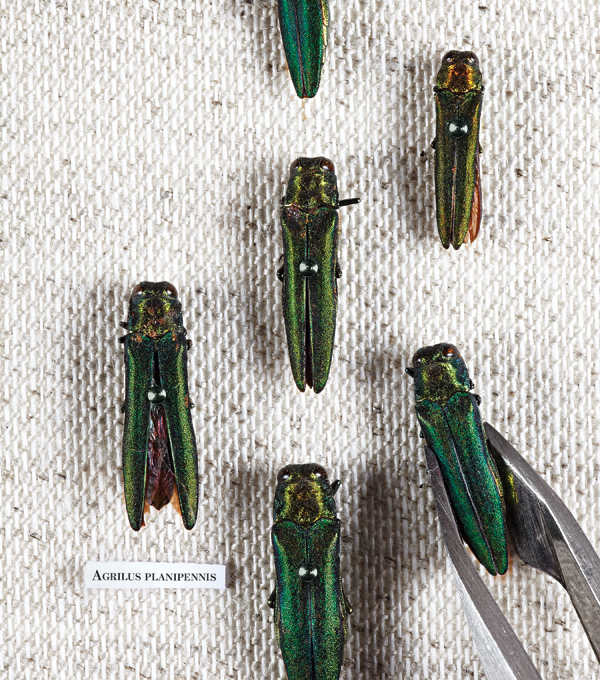 The Lorax, Dr. Seuss’s furry orange prophet of impending environmental doom, is not the only one who speaks for the trees. There’s also Brad Bonham, an arborist and landscape designer who lives in Wyoming. A jocular woman in her 50s, Bonham has become an evangelist for saving one tree in particular: the ash, a deciduous hardwood with almond-shaped leaves that can be found along many urban streets and in wooded areas across the region.

Bonham has gone to numerous municipal meetings and neighborhood coffee klatches to educate city administrators and homeowners on the emerald ash borer, a metallic green beetle from Asia that probably sneaked into the United States via packing pallets. It was first discovered near Detroit in 2002 and made quick work of Michigan’s ash trees, killing more than 30 million, before moving on to neighboring states—including Ohio.

Most Cincinnatians should have heard about the beetle by now. It was first found in Warren County in 2006 and has hit areas such as Anderson Township and Springboro especially hard. But while many residents have a passing familiarity with the scourge and its devastating impact, not all have acted to protect their trees. To that end, Bonham has a straightforward suggestion: “Quit dithering.”

“If you want to save your ash trees,” she says, “you’ve got to treat them this year.”

One reason for the complacency is the fact that the infestation takes a while to get going, which means the damage is not noticeable for several years. Eventually though, the number of beetles increases exponentially. From here on out, says Joe Boggs, an Ohio State Extension entomology professor, “The trees are going to decline very rapidly, and it will surprise people how quickly it happens.”

If the infestation is caught early, a tree can be saved with the annual or biennial application of a handful of insecticides, which are either injected into the trunk or applied at the roots. But insecticides can be expensive, forcing officials and homeowners to make some difficult choices.

Hamilton County Park District managers have elected to save ash that provide shade near picnic areas, that act as barriers between holes on its golf courses, or that are particularly old. In 2010 and 2011, the district spent approximately $87,000 to treat 700 trees with an insecticide that is supposed to be effective for up to three years.

At the Cincinnati Nature Center’s Rowe Woods facility, officials will spend $5,000 to save 12 ash out of about 10,000 on the property. Some of the trees provide shade in a memorial garden, where members of the public can purchase a marker in remembrance of a loved one. Another is a 200-year-old ash in the old growth section of the woods.

Most of the trees Brownknight points to are narrow, maybe eight to 10 inches in diameter, but farther up the path, he stops at one with a substantial trunk, at least 30 inches across. The tree’s diamond-patterned bark has been stripped off all the way around the trunk. Brownknight rests one hand on the decimated bark and cranes his head back, gesturing with his other hand at the branches high up in the crown. The destruction goes all the way to the top.

“Sometime last year, our members began to notice this,” he says. “They were coming into the visitor center and asking, ‘What’s wrong with these trees?’ ”

Woodpeckers peeled back the bark, eager to get their beaks on the borer’s larvae. It’s those larvae that kill the trees, by creating tunnels that cut off the circulation of nutrients. A tree this damaged has no chance to survive. If it were a few feet deeper into the woods, it would simply be allowed to die and fall over. But since it’s within 50 feet of the trail, it’s been slated for removal.

“It’s discouraging at times,” Brownknight says of the loss of the ash. “I have to remind myself that disturbance in the forest is part of the natural order of things.”

Although it might not be cost-effective for the Park District or the Nature Center to save more than a handful of ash trees, Bonham hopes she can convince homeowners and municipalities it’s worth it. Ash trees perform important environmental services. They suck up pollutants in the air and keep excess water from getting into overwhelmed sewer systems or flooding low-lying areas.

On a recent spring morning, Bonham is on a backyard patio speaking to the Wyoming Newcomers Club.

“I volunteered to help inventory all the ash trees in Wyoming,” she says, “so I feel like I know all of them, including that little junk tree that doesn’t look like it’s going to leaf out this year.” She gestures toward a neighbor’s yard and heads swivel. Few in this crowd even know if they have ash trees in their yards, but soon they are asking questions:

Are the insecticides safe for children? Yes, Bonham says, they are applied at the roots or injected into the trunk, so there’s little to none on the outside of the tree.

What if your neighbors don’t treat their trees? Bonham tells them she has an agreement with her neighbors: She treats the trees and if they survive, they owe her nothing; if they die, the neighbors pay the cost of removal.

How do you find a reputable arborist? Make sure they are certified by the International Society of Arboriculture and check out the company with the Better Business Bureau.

By the end of the hour, Bonham has some converts. One woman suggests that they create a bumper sticker with the slogan: “CYA: Cover Your Ash.” For Bonham, who speaks of going through the stages of grief over the loss of her community’s ash trees, this idea brings a moment of levity to an otherwise somber subject.

A broad grin spreads across her face, and she pumps both fists in the air. “CYA: Cover Your Ash,” she proclaims. “I love it!

Strike One
A dead ash tree quickly becomes a liability. Once the tree dries out, its branches break off and fall to the ground. “Dead ash trees become brittle very fast,” says Joe Boggs, an Ohio State Extension entomologist. “The reason we make baseball bats out of ash is because the wood is light and strong. But it’s also very brittle. When a bat breaks, it typically shatters.”

Much to Lose
Experts at OSU estimate there are 3.8 billion ash trees in Ohio, and all are at risk from the emerald ash borer—the few counties that don’t have a confirmed presence are surrounded by counties that do. In Ohio, the beetle was first discovered in the Toledo area in 2003.

Slow Death
The beetles kill the ash by laying their eggs on its trunk and branches. When the larvae hatch, they tunnel inside the trunk, feeding on a layer just inside the bark. Eventually, they disrupt the flow of nutrients and the tree dies, usually within two to five years of infestation. “They destroy the tree’s plumbing,” Boggs says.