Home Sports And They’re Off… 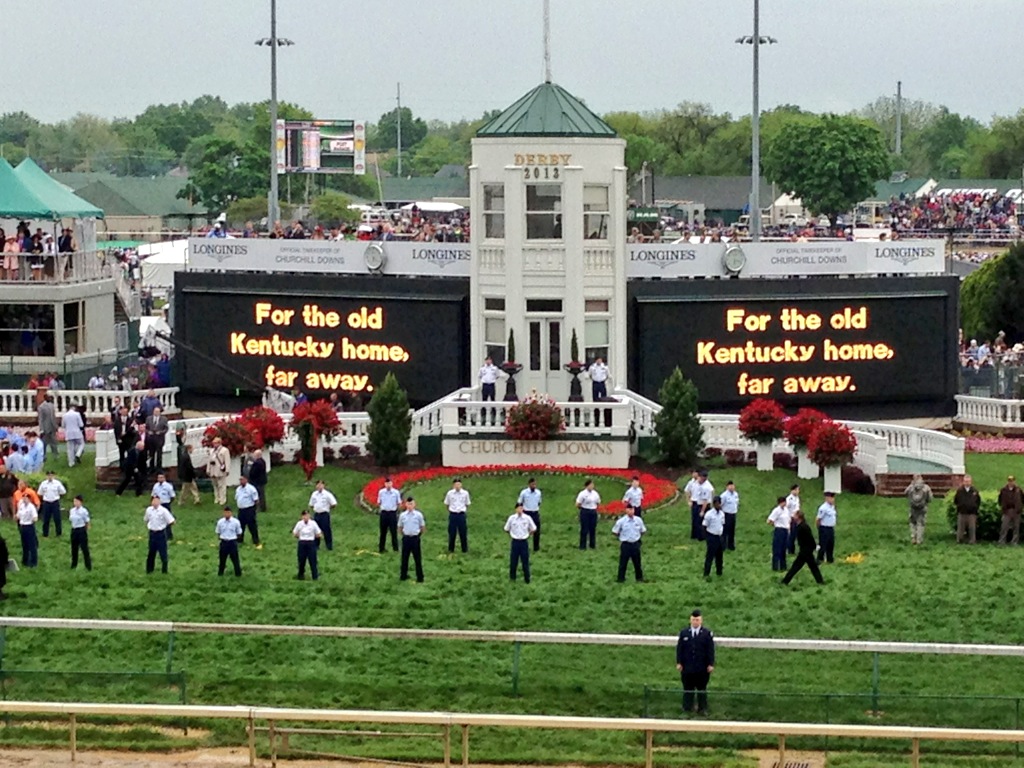 In the end, Orb crossed the finish line first, the field favorite winning the 139th running of the Kentucky Derby in just over two minutes’ time. Mud caked the horse and his jockey, Joel Rosario, who rode the young colt to victory for trainer Shug McGaughey and the Phipps family owners (cousins Ogden Mills Phipps and Stuart Janney III) on a day that saw steady rainfall and very little else. Despite their prominence in the horseracing industry, Orb’s triumph on Saturday was the first Derby victory for both parties, a fact that was obvious on their faces in the post-race press conference. Taking the Triple Crown is the sport’s only higher achievement, and that can’t be done unless you win the Derby first. For these men, who have devoted decades upon decades to this very honor—this two-minute stretch that ultimately occurs while they stand and watch—there is no greater joy.

And yet, the Derby is not theirs to have. Nor is it the horse’s, nor the young Dominican jockey’s. They are all merely an endnote to something much bigger, an event that belongs to so many more.

This past weekend was my first time covering and attending the Kentucky Derby, having missed out on all 138 previous opportunities (in a manner of speaking). I’ve watched the Derby on television in years past, giving it the same amount of thought I give to Labor Day or Earth Day or any other annual occurrence that is largely relevant for only 24 hours. It’s nothing against the Derby, just that my interest in horse racing overall is casual at best. I knew it only as a brief flash across my TV screen, conquered by an animal victor who was even more oblivious to the feat than I was.

But when I arrived at Churchill Downs on Saturday, some eight or so hours before the race was set to begin, I was finally enlightened to what those 120 seconds of television are unable to convey. My eyes were opened: To the hordes of people who descend upon Louisville donning extravagant suits, whiplash-inducing cocktail dresses, ridiculous hats—oh, dear God, the hats!—and every pastel-colored clothing accessory on the face of the earth. To the smoking, drinking, and revelry, a yearly re-creation of Sodom and Gomorrah. To the incessant gambling, as attendees plop down piles of cash into tiny windows in exchange for tinier slips of paper, gleefully staking their money on a sport most of them know next-to-nothing about. It’s the world’s fanciest, most grandiose frat party. I kept expecting Jay Gatsby to come strolling out on a balcony overlooking the proceedings, flashing a wry smirk and looking an awful lot like Leonardo DiCaprio. The entire spectacle was unlike anything I have ever experienced. And in so many ways, it was absolutely beautiful.

There are those on the outside of the track as well, four or five stories above the flooded soil, looking down on the races from their exclusive boxes. Or perhaps they are still behind the floor-to-ceiling windows, placing bets and perusing the buffet, making sure not to spill anything on an outfit that cost more than what the guy on the grass paid for his house. This building—with floor upon floor of ballrooms, white tablecloths, and viewing areas that span the homestretch—is called Millionaires Row, where everyone undoubtedly lives up to the moniker. And that’s not even the owners’ area, which hovers just below, where you could throw a rock and have it bounce off a billion dollars worth of human flesh and tailored suits.

And then there are those surrounding the paddock and traversing the concourse, sporting wardrobes that are lesser only in cost but never in flash. The overall variety is incredible. For every drunken pair of college kids making out in the corner, there is a filthy rich entrepreneur with his arm draped around a woman in a dress she’s far too old to be wearing. For every middle-class guy drinking an $11 mint julep that isn’t worth the plastic cup it’s poured in, there is a silver-spooned 20-something drinking Stella Artois from a glass, smoking a cigar the size of a flashlight, and screaming into his iPhone, “Let’s chill later, bro.” For every Joe Schmo betting $2 on a horse purely because he likes the name, there is a Richie Rich throwing down two grand for the same reason. It’s a random and diverse collection of people, all of whom are there to do the exact same thing: dress up, drink booze, smoke cigars, and win some money. They don’t come for the Kentucky Derby because it’s a race. They come for the Kentucky Derby because it’s an event. And they’re all experiencing it right there together, separated only by their bank accounts.

Orb’s run was majestic. The horse drifted toward the back for the first half of the race, waiting until the third turn to really start his push, using the fourth and final turn to propel himself to the front of the fray. He was 2 1/2 lengths ahead of Golden Soul as he crossed the finish line, though it felt like no one ever would have caught him, even had the race continued on into eternity.

There were no David & Goliath heroics at the Run for the Roses. Orb eventually settled at 5-to-1 odds to win, the most popular choice among those laying cash. And in the end, the favorite proved victorious, starting the race as the strongest horse and finishing in the same fashion.

Shug McGaughey and the Phipps family—a few very wealthy horse racers—were finally winners. But so too were thousands of others at Churchill Downs on that day, from the Armani-wearing stockbrokers on Millionaires Row, to the poncho-wearing locals clutching rain-soaked tickets in their hands. Their journeys and winnings were all vastly different. Their joy, however, was exactly the same.