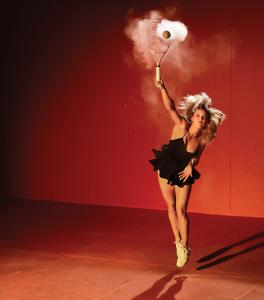 This year the Western & Southern Open, held August 13–21 at Mason’s Lindner Family Tennis Center, assumes its place as one of the top tournaments in the world, one step below the four Grand Slam events and on par with top-tier tournaments held in larger, sexier cities around the world.

In the past, the W&S Open had separate weeks for the men and women—and a lower-tier women’s draw until recently. But this year’s event will feature the top men and women in the world in the same week, spread across a renovated campus that includes six new courts and a state-of-the-art players’ center. And though Mason has no answer to the Trevi Fountain or South Beach, the Cincinnati tournament is gaining a reputation among fans for top-level tennis that’s affordable and more intimate than many of its big-city cousins. At the U.S. Open, a good look at Rafael Nadal might require a set of binoculars; Cincinnati fans can sit close enough to watch the sweat rolling off his arms—and grab a post-match autograph to boot.

“It really puts us in rare air internationally as a city, because there are very few cities that get to watch the top men and women at the same time,” says Will Sikes, marketing manager for the tournament. Adds Nima Naderi, a tennis analyst and blogger: “There are only nine of these tournaments a year. To be hosting this sort of event, [organizers] have to be doing something right.”

The new courts are just one element of the tennis center’s three-year, $20 million expansion. Last year, the tournament debuted the Paul Flory Players’ Center, named for the longtime director. The complex features a training and fitness center, dining facility, players’ lounge, locker rooms, a press center, computer stations for players, and more than 160 televisions, scattered throughout. This year’s construction added 5.4 acres to the grounds, including extensive green space in addition to the new courts, which bring the center’s total to 16, half for matches and the rest for practice.

Although the W&S Open is the oldest tournament in the U.S. still played in its original city, its rise to prominence was anything but a given. Cities compete to draw the world’s best players to their events, and the top talent can charge a fee for entering. Organizers are always jockeying to gain a competitive advantage, whether sponsorships, geography, or tradition. While southwest Ohio’s weather in August can be less than ideal, the region has the advantage of being in the same time zone with roughly the same climate as the U.S. Open in New York a week later. Over the years, the local event has emerged as an important final tune-up before the Open.

This year’s tournament—officially a Masters 1000 event for men and a Premier 5 event for women—is mandatory for the top 10 on each tour, and officials are expecting at least the top 40 in each field to compete for the $5.2 million in prize money. Tennis analyst Naderi says Novak Djokovic, who won 43 straight matches to start the year before losing to Roger Federer in the semifinals of the French Open, should be the favorite to win in Mason. He sees the women’s field as more open, but if Venus and Serena Williams can play—despite injury issues early in the year—they’ll likely be the center of attention.

Many credit former director Flory with guiding the tournament from a small event held at Old Coney Island to the international draw it has become. Especially in the last six years or so, the event has evolved from a local attraction to an increasingly regional one. The percentage of fans coming from outside Ohio has increased along with attendance, and the tournament now advertises in a dozen or so regional markets as well as nationally. Three television networks—the Tennis Channel, ESPN2, and CBS—will broadcast more than 60 hours of this year’s competition.

As for the players, the suburban setting offers a change of pace that’s welcomed by some and merely endured by others. Not every tournament boasts an amusement park the size of Kings Island across the highway with a golf course on site. Players receive free admission to both and are known to take advantage. (Rafael Nadal in particular is an avid golfer and hits the Golf Center at Kings Island whenever the opportunity arises.) Others patronize Cincinnati’s professional sports teams, with both the Reds and Bengals in action. In 2010, Andy Roddick and his wife, model Brooklyn Decker, went to a Reds game to watch Roddick’s friend Homer Bailey pitch, then continued on to a Bengals game to see another friend, Terrell Owens.

“They’re not in New York, where everybody recognizes them, and most of them aren’t staying in the central business district downtown, so they can almost melt into the fabric of Midwestern society,” says Sikes. “They can eat at Carrabba’s, they can relax, blend in. There’s no pressure to go out and do extraneous events. When you live that lifestyle, Bravo Cantina can be a welcome change.”

Even for sports fans who don’t follow tennis closely, the W&S Open offers a chance to see top-ranked athletes up close. The format encourages wandering from court to court to see all that professional tennis has to offer; women and men, singles and doubles, even practice time can make for a compelling few hours when it’s all in one place. The format was something Vince Cicero had to get used to when he moved from the Bengals front office in May to become the new director of the W&S Open. Another change was the international nature of pro tennis, where players from all over the world meet again and again in far-flung destinations to compete.

“There’s certainly a great passion for it, and coming from a sport that’s U.S.-based, the competition in tennis is truly international,” Cicero says. “When you look at the fans, they don’t base it on nationality—someone like Federer or Nadal is fully accepted and they all have their pockets of fans. We’re really fortunate to have them here in Cincinnati.”

Main Draw
During the course of the tournament, the full-time staff of 10 is joined by a seasonal staff of more than 50, as well as 1,400 volunteers and nearly a quarter million tennis fans.

Ancient History
The tournament began in 1899 at the Avondale Athletic Club and has been held at Old Coney Island, Cincinnati Tennis Club, Hyde Park Tennis Club, and Queen City Racquet Club. It moved to Mason in 1979.

Happy Retirement
Cincinnati was the first tournament to help establish and contribute to a pension fund for the players on the ATP Tour.

Photograph by Dewey Nicks for WTA’s “Strong is Beautiful” campaign.
Originally published in the August 2011 issue.