For our January 2015 Top Doctors issue, we spoke with University of Cincinnati Neurological Surgery Resident Benjamin Bixenmann about finding a better way to diagnose concussions:

“The diagnosis of concussion is mainly subjective. It’s based on questions and answers. Medical personnel ask the subject or the athlete, Are you having headaches? Are you feeling dizzy? Do you know where you’re at? You’re completely reliant upon [the person] giving you truthful answers. There is not currently and there has not been in the past an objective test. There’s a big fear in the athletic community: When is it OK to send athletes back on the field? It’s not only in athletics; it’s in daily life. When is my patient in the emergency room OK to go back to their job?

The goal of my project was to develop a way to diagnose concussion that’s objective, and to have something that you can follow. We took a device that’s been around for 20 years, the Optovue scanner, mainly used for the diagnosis of glaucoma, macular degeneration, and other ophthalmologic conditions. Given our knowledge of the anatomy of the brain and its connection to the back of the eye through the optic nerve, we thought if we had a sensitive enough tool, we might be able to detect changes occurring at the cellular level within the retina after someone’s had a concussion. When I look into the back of someone’s eye with an ophthalmoscope, I can see the retina, blood vessels, and optic nerve head, which is the connection to the brain, but I can’t see things that are changing because of high pressure.

We took the entire UC football team and women’s soccer team and got baseline scans on about 150 athletes. The scan is fast; it takes about three minutes to do the imaging test. Fortunately for the football team, in 2013 there was only one real concussion. We took the Optovue, which takes very fine micrometer images, and saw that that athlete had some thickening of the cell layers of his retina, compatible with swelling of the brain. We got an image six days after his concussion and he had swelling of the layers. We repeated his images about five weeks after his injury, after all of his symptoms had gone away, and everything had returned to normal. There are other [ophthalmologic conditions] that could be causing changes in the back of the eye, but those other pathologies don’t fit with something that causes swelling and then returns to normal.

The grant from the Mayfield Education & Research Foundation was used to bring the device back to campus. We tried to get every athlete to have baseline testing done. There was also a grant to expand it into high schools this year. We’re the only center using this device in concussion [testing]. If we have promising data in 100 concussion athletes or patients, it would be a game changer for the management of concussion.” 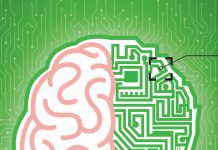 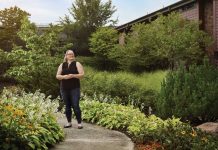