Home Dining Reviews Dutch’s: The Little Beer Dock That Could

By 2010, Jay Ashmore had spent three years transforming Dutch’s Bottle Shop, a 70-year-old bare-bones drive-up pony keg, into a craft beer destination, stocking roughly 900 different bottles. But the self-appointed “High Priest of Potables” was eager for a new challenge and craved a change of pace. He jumped at an opportunity with Stone Brewing Co. (based in California) and left the shop in the hands of his enterprising wife, Pam. A five-state sales territory brought him into contact with scores of forward-thinking retailers, and he quickly became enamored by high-end specialty shops that offered sit-down dining, cross-utilizing both ingredients and staff. When the Starbucks next door to the Ashmores’ bottle shop decided not to renew its lease in 2011, the couple pounced and dove into the expansion they dubbed Dutch’s Larder.

Enter Jim Cornwell. An acquaintance from local restaurant circles, the Maisonette, Boca, and Hugo veteran found himself deep in conversation about values and philosophy. Both Ashmore and Cornwell prized small purveyors, traditional craftsmanship, and bold, unusual flavors. Cornwell came on as part owner, assuming the role of executive chef and taking over purchasing, while the Ashmores refurbished the cozy interior and put together an ambitious retail beverage program. Almost overnight, the former corporate coffee shop boasted an open kitchen, a gleaming copper bar, and ceiling-height rustic shelves stocked with artisanal olive oils, pastas, beans, and vinegars. To maximize space, a patio between the two buildings was outfitted with a near-regulation bocce court and plenty of tables for al fresco dining.

Dutch’s collective passion for serious snacks is unfettered by pretense. Cornwell is like a kid on Christmas morning. His bright blue eyes flash mischievously as he waxes exuberantly about his work. He revels in being untethered by what he can buy or create, and jokes that splitting his ingredients between kitchen and retail is often simply governed by how hungry he is that particular day. And while he hasn’t stepped away from the stove completely, chef de cuisine Patrick Hague drives the menu most days.

It’s abundantly clear that Cornwell and Hague rely on top-shelf ingredients instead of trendy plating or culinary pandering—there’s nary a tweezer in sight. Humble starters like the classic pistou soup don’t need much meddling. Ample chunks of smoked chicken are bathed in broth along with fork-tender green and white beans, corn, and a bright hit of basil-heavy pistou. The house-made pork liver terrine is testament to great meat and traditional technique. Sliced thin, the just-dense-enough terrine manages to hold onto its cloak of bacon and the small sprinkle of pink salt, and the accompanying schmear of coarse mustard tempers its richness. Roasted olives, the ubiquitous wine nibble, include five top-shelf varieties (think niçoise and cerignola) of varying size and flavor that soften as they mingle with thyme sprigs and fresh garlic cloves.

Dutch’s has earned a reputation for their sandwiches, and the praise is well deserved. I consummated a sultry love affair with the beef short rib grilled cheese in 11 perfect minutes. The bold beefiness was paired perfectly with some sweet and stinky taleggio, and served pressed, almost panini-style. The BLT was a bit more delicate. While individual ingredients sung in peak-season harmony—the slice of house-cured bacon was crisp, the purple-flecked heirloom tomato tasted straight from the vine, snappy aioli added lift, and just enough butter lettuce was tucked in for crunch—the toasted pan au lait only held up for a few bites before the sandwich turned to salad. Then again, maybe I was just squeezing too hard.

Free-flowing evenings on the patio call for a charcuterie plate. The six-item option is about right for three diners doing some subtle snacking. Surgically thin slices of peppery, salmon-hued Smoking Goose capicola rubbed shoulders with varzi, a Lombardian salami with a slightly course texture and unexpected notes of clove and cinnamon. The Bent River camembert was sweet and sour, with a texture only slightly firmer than sweetened condensed milk, and a six-month aged manchego was recommended by Cornwell himself. Its salty-nuttiness was only enhanced by a housemade pistachio-and-honey paste.

While Dutch’s boasts around 300 varieties of wine (from humble rosés to spendy cult cabs), bar manager Anthony Bailey’s glass pour list holds a few surprises, most notably the 2012 Lioco Indica carignan. A variety used mostly for blending, the forward note of black currant fades into tangy fruit and gentle tannin, a nice companion for the meatier sandwiches. Also popular is the 2013 Borealis, a blend of müller-thurgau, riesling, gewürztraminer, and pinot gris. The 2012 Max Ferd Richter riesling has a hint of green apple and pairs particularly well with the charcuterie. Bailey points out that many of these wines resonate because of their emphasis on acidity and flavor, not heavy oak. Meanwhile, eight beer taps, leaning toward small craft producers, rotate quickly.

If there’s one thing that Dutch’s proves on a daily basis, it’s that there is no longer a traditional formula for the thriving restaurant. Their model is an organic one: Visit the Larder—one part delicatessen, one part haute food shop, one part open kitchen—and joke with the executive chef behind the meat counter; he’ll probably point to his homemade pastrami. And why not? It’s destined to end up on your sandwich. Be prepared for the bartender to suggest a glass of wine you can grab a bottle of on the way out the door. They may not have written the book on how a place like this ought to operate, but they sure perfected the formula. 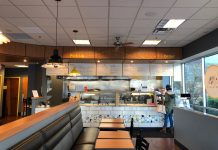 The Kitchen by Butlers Pantry is Covington’s Newest Brunch Spot